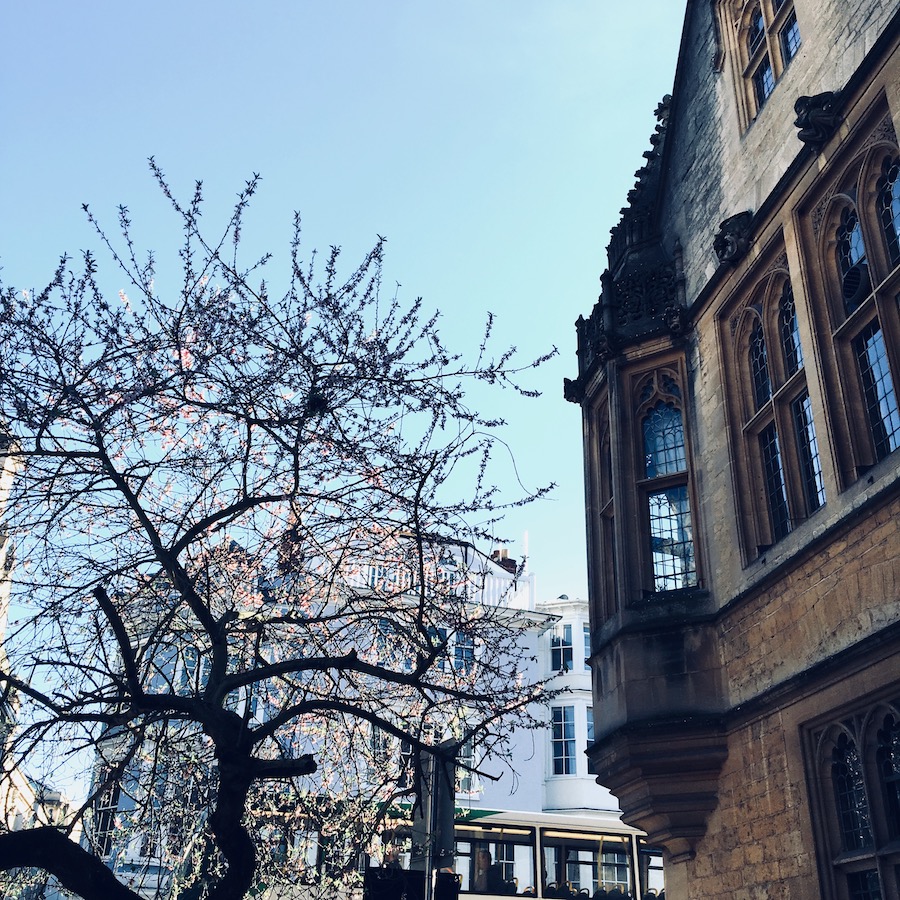 Nine years is a long time to spend in post-secondary education, but it was worth it. While my peers trudged off after undergrad to become corporate drones, our society’s most exalted title was bestowed on me: Doctor of English Literature. We’re like medical doctors but, you know … smart.

When I received an offer to teach at Oxford, my soul sang an aria. The students I’d taught thus far had been gormless, greasy troglodytes, littering my course evaluations with comments like ‘pretentious as hell’ and ‘tweed is unflattering’.

But Oxford students would appreciate genius. When I delivered my exegesis of Aristotle’s Poetics, my students would give me the kind of prolonged applause even Stalin would envy.

On the first day of class, I was ready to transform lives.

‘The United Kingdom has produced some of the most amazing works of literature ever created,’ I began, but I was interrupted.

‘They’re the most sexist, racist, colonialist, and kyriarchal,’ said Henrietta, perched in the front row.

‘Kyriarchal?’ I said. ‘Never heard that one. Terms like “sexist” and “racist” might seem to the uninitiated like strong enough terms for condemning these magnificent works but sure, let’s throw in some more. Love the opportunity to add a whole new lens to the analysis.’

‘Always happy to educate you,’ said Henrietta, with a serene smile.

I smiled back so hard that my cheeks hurt, our gazes locked in shared loathing.

‘Is ‘kyriarchal’ going to be on the test?’ Philip asked. He was a boy in the back whose phone seemed surgically attached to his hand.

Philip was already looking at his phone.

It only got worse. Henrietta approached the texts like a deranged conspiracy theorist, finding ‘kyriarchy’ and ‘master dialectics’ in poems on sheep, but it was almost preferable to everyone else falling into a coma until they heard me say ‘marks’ or ‘assignment’.

During lonely office hours, I’d look up at my poster of Shakespeare and imagine what it would be like to bring him to my class.

‘The meaning of Hamlet is-‘ he’d begin, and then a hand would go up.

‘Yes?’ the great man would say.

‘Will this be on the test?’ the student would ask. Forget beauty, truth, the great metaphysical questions of existence: the test is the be-all and end-all.

I turned to the most popular professor on campus, Gilda Gladwell, to be my Virgil, leading me through the depths of the student psyche.

‘But the best students are very political,’ said Professor Gladwell. ‘Bash the dead white men a little. Point out their flaws – believe me, they had them. It’ll get the students on your side.’

‘The whole point of studying those men is to understand their greatness,’ I said. ‘Why should I have to go all Valerie Solanas to get students engaged?’

‘Well then, what about incorporating some experiential learning?’ Professor Gladwell said. ‘That gets results. I’m bringing a lion to my lab for study soon and the students can’t wait.’

‘Isn’t that dangerous?’ I asked.

‘Safety is a core commitment of mine,’ said Professor Gladwell. ‘Every precaution will be taken.’

On the day when the lion finally arrived, I was stuck in my office grading essays on A Modest Proposal. There was a pit of dread in my stomach. Everyone would attend my next lecture only because I would be discussing the final exam. My every attempt to connect with these students was like making love to the dead.

Just then, my office door burst open. Professor Gladwell rushed in, her glasses askew. ‘The lion escaped,’ she said. I gasped. ‘But they caged it again,’ she added.

‘You should have led with that,’ I said. ‘Always lead with “you are not in imminent danger of being eaten”. How did it get out?’

‘Someone may have made a slight error involving the lock,’ said Professor Gladwell.

‘Let’s not play the blame game. What we should really be focusing on is that everything’s fine now. Yes, there was a bit of a kerfuffle, but we got that kitty cat back in with almost no difficulty.’

I pulled out my phone and checked social media, clicking on the first video. The sound of students screaming in terror filled the office.

I kept scrolling. There were endless tweets and posts from students describing their fear during the lion attack.

‘Wow,’ I said. ‘I wish they cared this much about English.’

‘If I were you, I’d avoid anything that mentions me,’ said Professor Gladwell.

‘They say never read the comments, and now I know why. People can be so callous.’

As I kept scrolling, I was getting excited. This could finally be the way to connect with my students. The lion attack relayed through the oral tradition of social media could be our way into Beowulf.

But I needed a hook. Something that spoke to a media-savvy generation who preferred ten second video mash-ups to higher pleasures.

There was more footage of students recording goodbye messages to their parents, but eventually I found the kind of moment I was looking for: someone had captured the lion pawing a basketball. Ten minutes with editing and one bouncy soundtrack later, I had the story of Loki the Lion’s big day out with the ball. Loki, watch out for that bookcase! Loki, you scamp!

And this had the potential to reach more than just students. The one thing the internet loves above all is cat videos. If I put the video on YouTube, Loki’s basketball skills would capture the hearts of the nation. There’d be jokes on social media and parodies on talk shows, then everything from ringtones to mugs to talk of a movie. Flash mobs would mass in public squares, everyone doing the Loki dance.

But I didn’t have time to think about the anecdotes I’d share with Ellen. My students took priority. I emailed a copy of the video to the class and told them we’d take some time to discuss it together.

‘Hey everyone!’ I greeted the class the next day. ‘Did you see that video of Loki the Lion? Anyone have any comments?’

‘Anyone other than Henrietta?’ I asked.

‘Uh, yeah, I saw it,’ said Philip. ‘No offense, but cat videos are kind of for … middle aged women who knit.’

The boys beside him snickered and nudged one another, pointing at the knitted cap on my desk.

‘Oh…okay,’ I said, a little shaky. Being a great professor was all I’d ever wanted. Why wouldn’t they meet me halfway? Straining to be peppy, I changed the topic to my very favourite.: ‘’Today we’re tackling Aristotle’s Poetics.’

‘We need to spend some serious time unpacking his misogyny,’ said Henrietta, who was often kind enough to help me teach the class.

I felt a vein pulse in my temple. ‘We can touch on that. I’d like to focus on the ways he’s been a foundational thinker in Western drama.’

Philip raised his hand. ‘Is this going to be on the test?’ he asked.

Something in me snapped. ‘Yes, the whole basis for Western drama is going to be on the test! You’re privileged to have the chance to study literature with me but you’re wasting it!’

Philip rolled his eyes, and then went back to scrolling on his phone.

‘What do I have to do?’ I shrieked. ‘Tell you to stand on your desks because, man, the view’s different up there? How do I motivate you kids to value some fucking knowledge?’

‘I think we need to interrogate our definition of “knowledge”,’ said Henrietta. ‘I want this to be a safe space, free of linguistic violence. We need to be open to incorporating multiple ways of knowing and-‘

Henrietta was interrupted by a low growl.

‘What does your way of knowing suggest we do?’ I asked, staring in the direction of the door. A strange calmness settled over me.

‘Maybe it’s someone pulling a prank. Maybe it’s not actually a lion,’ Henrietta said. She went around the corner to the classroom’s entrance and we heard the door creak open then slam shut. ‘Okay, it’s a lion.’

‘Experiential knowing!’ I said, as students screamed and rushed to move the desks to the door. ‘Also closely related to Aristotle’s idea of practical wisdom.’ A teacher never stops teaching, no matter the circumstances.

Thump. Desks shook as the lion hurled itself at the door.

While students clambered over each other to get the farthest away, I said, ‘Pop quiz: if we shelter in place till help arrives, to which Aristotelian dramatic principle does that relate?’

‘The unities?’ said Henrietta, trying to wedge herself between the wall and a fat boy.

‘Correct!’ I was in the zone. My students had never been so alert in class before. ‘Now, here’s your bonus mark. Philip, I know you’ll want to earn this one.’ Thump. ‘When Loki breaks the barrier you’ve erected, smashing through the fake wood and devouring a classmate in its slavering jaws, what is the Aristotelian term for the pity and terror you’ll experience?’

‘I just needed an elective!’ he screamed.

‘Catharsis!’ I said. ‘The release of suppressed emotion drives the story to its end.’

There was a scuffle outside our door, a roar, and then, ‘We got her!’

‘Our little mishap is resolved,’ we heard Professor Gladwell call. ‘Nothing to worry about.’

‘Nothing to worry about?’ I asked. ‘What about keeping your job?’

‘I just got tenure.’

Tenure? Her publication record wasn’t nearly as good as mine.

Although my course evaluations that semester were brutal, my students scored perfectly on their exam questions on Aristotle, displaying real insight into his ideas on terror. Professor Gladwell was right – all I had needed was to incorporate some experiential learning.

Julie McClement (@JulieMcClement) graduated from Centennial College’s Children’s Media program. She grew up in midwestern Ontario and works as a UX Researcher. She has been previously published in Dwelling Literary and The Minison Project.