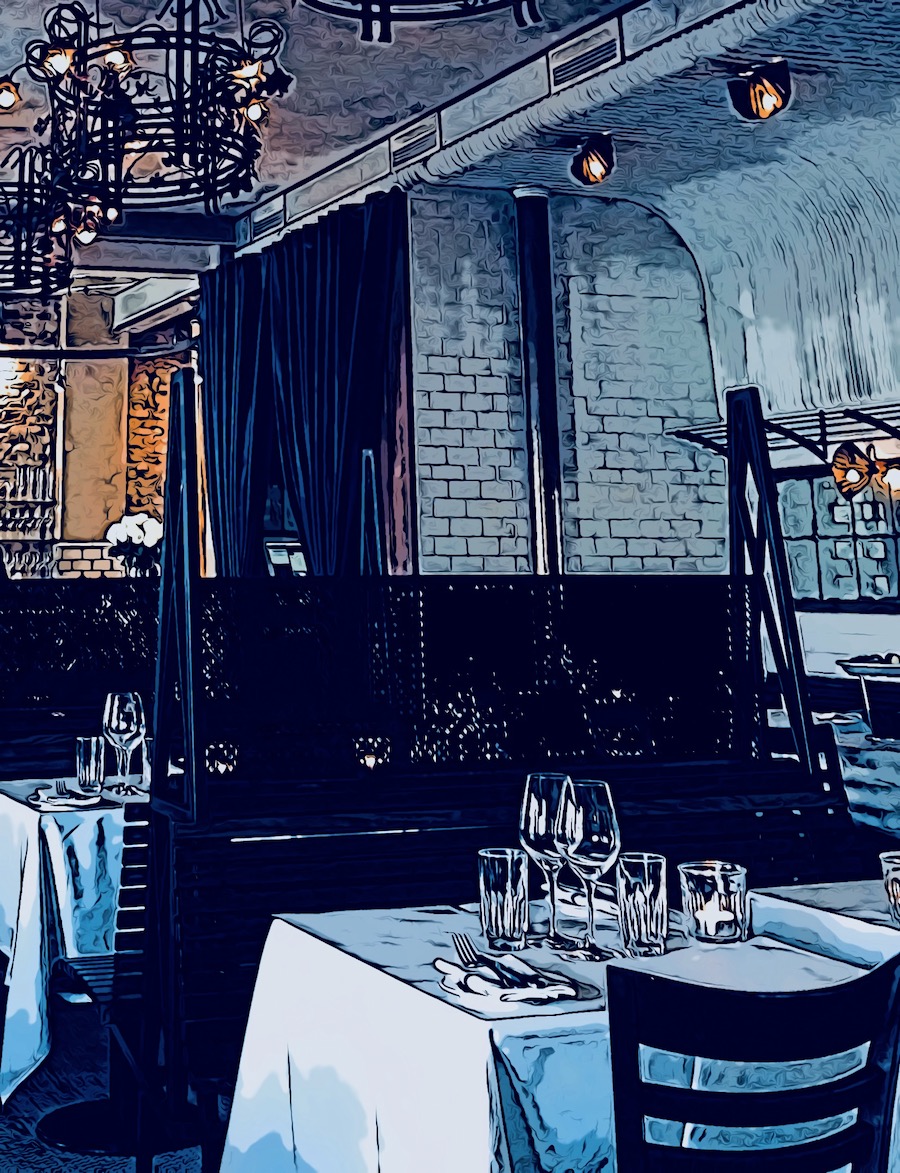 Perhaps this one wouldn’t be a disaster. Her friend, Rosalyn, had recommended the website and she had ended up with someone who appeared quite normal.

Ellen peered over the top of the leather-bound menu and felt a small rush of heat. Patrick looked up, blue eyes catching the candlelight. They smiled at each other.

‘Have you decided?’ He laid his menu flat on the table in front of him.

‘It’s either the lamb or the salmon.’ She re-read the descriptions and placed her menu on top of his. ‘Yeah, probably the lamb. You?’

‘The steak tartare. I always have it here. It’s superb.’

‘This really is a beautiful place.’ She gazed around, taking in the burgundy walls and the ornate ceiling with intricate cornicing. Sturdy silver cutlery lay at perfect right-angles on the white linen tablecloths. Diners murmured to one another as waiters breezed between tables, platters borne aloft and chins tipped up. The maitre d’ kept guard at his desk by the entrance. His elegant tails swept down the back of starched pinstripes as he bestowed welcome or denied recognition to those who approached. In one corner, a grand piano reflected the sparkle of the chandeliers on its polished ebony. A young man with strange hair and wire-rimmed glasses – an arts student, she guessed – provided the low-key Classic FM style soundtrack to the dining experience.

Ellen shook out the cloth napkin and smoothed it over the vast expanse of black nylon that was her lap. She had forgotten just how much the skirt on this dress rode up when she was seated. The other diners were impeccably, if oddly similarly, dressed. The men sported designer suits and the women were smothered in a range of colourful frothy frocks. Everyone looked so shiny.

‘May I take your order?’ One of the elegant penguins had wafted to their table. Patrick propped up the wine list and pointed to his selection.

‘An excellent choice, sir. He turned to Ellen.’ Have you considered the menu, Madam?’

‘The lamb. No, the salmon. No, definitely the lamb. Thanks.’

‘Again, an excellent choice. And for you, sir?’

They watched the waiter glide away, menus in hand.

‘God, I got such an urge to ask for a Big Mac and fries. Supersized.’ Ellen patted her hair to make sure everything was still clasped in place. Patrick leaned forward and took her hands in his, elbows resting on the table so that their hands formed an arch over the candle. ‘Bit cheesy,’ thought Ellen, ‘but let’s run with it.’

‘You look really beautiful,’ he said.

Patrick frowned and Ellen struck ‘good sense of humour’ from her checklist. His grip on her hands seemed to tighten and he looked directly at her.

‘It’s almost like…’ He paused, reflecting before continuing. ‘I never knew, ‘til I met you, that at some time I’d split in two.’ Ellen tried to free her hands, but his grip was firm. He gave her trapped fingers a little jiggle. ‘But now I’m sitting here, it’s true…’

The piano was much louder now. And there were strings. Ellen scanned the room but she could still see only a piano. She shook her head. No, she could definitely hear violins. Where on earth were they coming from?

‘Yes, even I can do the math…’ He winked at her and cocked his head to one side.

‘What the…,’ Ellen managed to snatch her hands free of his.

Patrick pushed his chair back from the table and rose, sweeping his arms open in an expansive gesture. ‘ …you are my other half.’

She looked desperately round the room, but everyone was gazing on in saccharine synchronicity. Oh dear God, she knew what was coming next. She too stood up, abruptly knocking her chair backwards into the diner behind her who responded with a benign smile. She clutched the napkin to her scrolled skirt and exposed thighs, reaching her free hand out in supplication.

Her shoulders sagged. He was strolling round the table with a short chain of waiters springing into place behind him. Other diners were swaying to the music of what now sounded like a full orchestra, although she could still see nothing more than a piano. Ellen backed away, but the little troupe kept advancing.

‘Doesn’t matter how you treat me…’ They circled the table. ‘…now I know that you complete me.’

She looked for help to the couple at the nearest table who beamed back at her. Patrick and the possé of waiters were between her and the exit, but the door to the ‘Ladies’ was at her back. She gave a nervous laugh and ducked into the toilets.

After the intimacy of the restaurant, the bright sterile light and pungent scent of roses assaulted her senses, but it was quiet in the white tiled interior. Ellen leaned on one of the sinks and drew a deep breath. White towelling flannels were heaped in a wicker basket next to the basins. She grabbed one, turned on the tap, soaked it, wrung it out and pressed it to her face. Buried in the warm cloth, all she could hear was the metallic gush of water into the sink and the low muzak piped into the restroom.

She dropped the cloth and placed her hands on the cool porcelain, regarding her smudged appearance in the mirror. There seemed to be nothing unusual about the restroom.

She cracked open the door and peered out into the restaurant. Patrick and the waiters were progressing round the room in a soft-shoe shuffle.

‘If I’m the eyeball for your socket,

You’re the spaceman for my rocket.

Two pictures facing in a locket,

You are my other half,’ Patrick crooned.

Ellen closed the door again, returned to the sink and stared at her reflection. There was no question: she would have to make a run for it.

Working through the layout of the dining area, she devised an escape-route which would allow her to grab her handbag and wrap on the way. Thank God it was a warm night so she wouldn’t have to engage with some singing coat-check person.

Taking a deep breath, she yanked open the door. Patrick was back in full voice and dancing towards her, arms outstretched, face split in a grin.

‘…now life’s all wheat without the chaff.’

Ellen bobbed under his arm.

‘You are my other half…’

She was weaving between tables now, bag and wrap clutched to her chest. Almost there. As she shot passed the maitre d’, he grabbed at her wrap.

‘Oi!’ Ellen felt herself whirling round. When she came to a stop, she was facing the maitre d’ and perfectly cocooned in her wrap. He bowed to her.

Ellen opened her mouth, but no sound came forth. At the edge of her vision she could see Patrick standing with the waiters kneeling at his side. All had their hands clasped to their chests and were looking her way. The music had become funkier.

Ellen pushed open the glass swing doors and exited into the night.