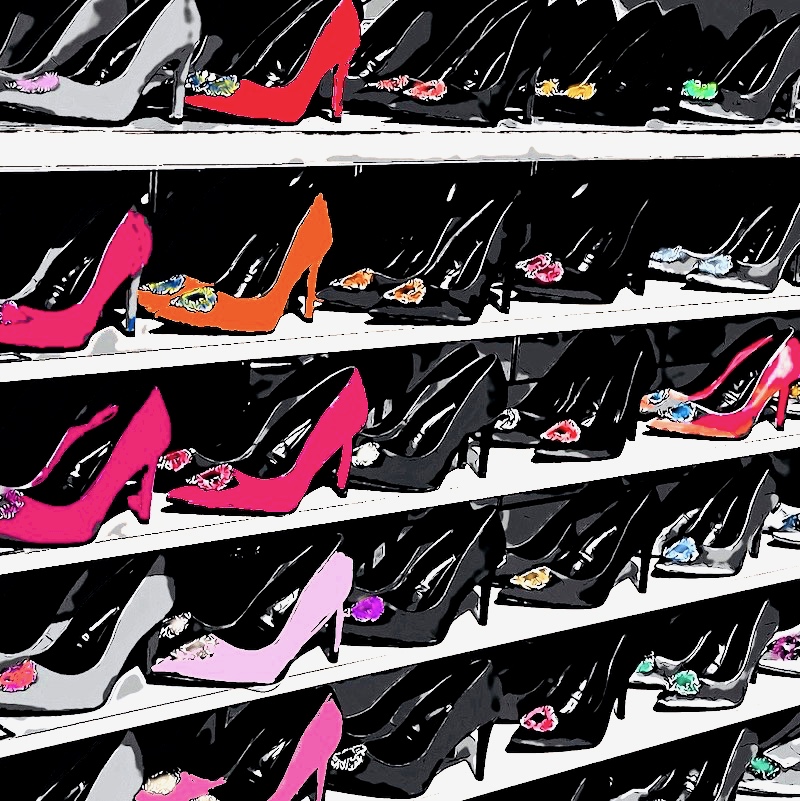 I have too many shoes, but that wasn’t always so. As a child reared in a poor family in an Appalachian region of Kentucky, I don’t remember ever having shoes. Recently, I looked through my mother’s few family photos and noticed that I wasn’t wearing shoes in any of them. When I took my mother to see the film, Coal Miner’s Daughter, about country singer Loretta Lynn whose family came from the county next to ours, she sniffed. “I don’t know what them old coal miners was complaining about; their children had shoes.”

In Kentucky my shoeless feet were tough enough to tread on rocks, burrs and black walnut shells. When I, or one of my siblings, had the misfortune of stepping on a rusty nail, our mother thought attention should be paid. If there was simply a show of blood, she poured iodine on the point of entry and sent us on our way. If the nail was still lodged in the sole, she would hold us down and yank it out before administering the iodine and wrapping a rag around the foot. It worked.

When we moved from rural Kentucky to a New Jersey suburb, I had to go to school and the weather was cold, so shoes were required. My mother ordered our shoes from the Sears Roebuck catalog, because in New Jersey she felt intimidated by having to raise seven kids in what seemed like a foreign place. Besides which, she had never learned to drive. My father, a long distance truck driver, was either on the road or hanging out with his buddies at a local garage.

When it came to buying clothes, Mom had a “let them grow into it” attitude, which meant one pair of shoes, which were always too big to fit,  per school year. As the oldest daughter I got the brand new, but oversized, pair of shoes, so their stiff faux leather hurt, raising blisters on the back of my heels. When I finally wore in the shoes, or actually grew into them, it was time to pass them on to the next sister, who never got shoes that were new or that fit.

As I became more self-conscious, I wanted shoes that looked like other children’s footwear. Besides, by 5th grade, in addition to dress shoes, we were required to have a new pair of sneakers each school year, so at age eleven, I told people around the neighborhood that I was thirteen and available for babysitting. Soon I earned enough to buy the sneakers, as well as a bottle of white shoe polish to spiff them up every few months.

By high school, I had landed a couple of part-time jobs and earned enough money to take charge of my own wardrobe. No more catalog clothes or shoes for me. In stores, I quickly learned that your size does not typically correlate with your age. Also that it is better to try shoes on for a good fit, rather than to stuff cotton-wool in the toes and bandage up your feet. My shoe-hoarding thus began: one pair for school, one pair for church, and a pair of sneakers, of course, for gym and play. I carefully tended to all my shoes because I was in the habit of keeping them in good shape for my younger sisters.

During high school, I could not afford to purchase the fashionable saddle shoes of the day, but I found a cheap pair of penny loafers that did me proud. Also, my feet stopped growing around 7th grade, while the feet of my sisters did not. So a well looked after pair of shoes could last me for more than one year.

Even though I did very well in school, I did not have the money or resources to plan for college, but I definitely wanted out of my home and my hometown. Fortunately, a director at the local recreation center and the youth minister at a local church teamed up to help me get one of the first Economic Opportunity Act grants given out by the federal government to assist low income students. I got money for books, tuition, housing, and SHOES!

During the first two years of college in the early 1960s, I proudly bought US Keds, rubber boots, sandals, and heels for dressing up. I was amazed that the shoes never seemed to wear out. Then the real 1960s arrived, and I was done with New Jersey. I quit college and headed for Berkeley, California, to stop the war on Vietnam. Naturally, I left the sneakers and high heels behind because on the West Coast I needed real leather sandals, fringed moccasins, and some boots that were made for walking—marching, protesting, and acting up. I took college classes while working in Berkeley, acquiring my hippie regalia from thrift stores. In Kentucky, thrift stores were called “second-hand stores” and had no caché, but in California during the anti-war movement, paying full price for anything was considered bourgeois.

When I left Berkeley to join the Peace Corps in Thailand, I stashed my hippie clothes and shoes in storage along with my college things. At that time in Thailand there were few ready-made shoes or clothes. For the equivalent of a few dollars, however, clothing was handmade. I wore loose-fitting dresses and, sometimes, nice sandals, but most of my footwear in Southeast Asia was flip flops that could get wet during a monsoon.

Returning to the States in 1970, I worked as a professional educator and counselor, so I had to acquire “pumps” and other “sensible shoes”, as well as a new assortment of boots—ankle-high, knee-high, even mid-thigh in height. Over the years I accumulated Frye boots, motorcycle boots, cowboy boots, boots with fringes and buckles, and even army boots for pairing with frilly dresses. Of course, I still had perfectly good, well-fitting shoes from college, from my hippie days, and even from Peace Corps service. For a brief period of time during the 1990s, my young daughter and I wore the same shoe size. She chose a few pairs of shoes from my collection and wore them out within a couple of months.

I asked a good friend who was an acupuncturist and soothsayer, “Why do I never wear out my shoes?”

She smiled. “It’s because you tread lightly on the Earth.”

Recently, when I hauled down and opened an old trunk that I had squirreled away decades ago, I found two gently worn pairs of Adidas running shoes. I smiled and put them in my closet.

I have too many shoes, and that’s okay.

Reared in Eastern Kentucky near the temperamental Licking River, Karen Beatty eventually settled in Greenwich Village, between the Hudson River and the East River, on the Isle of Manhattan. Her short stories and essays have appeared in Eureka Literary Magazine, Snowy Egret and, most recently, in Books Ireland and Mud Season Review.