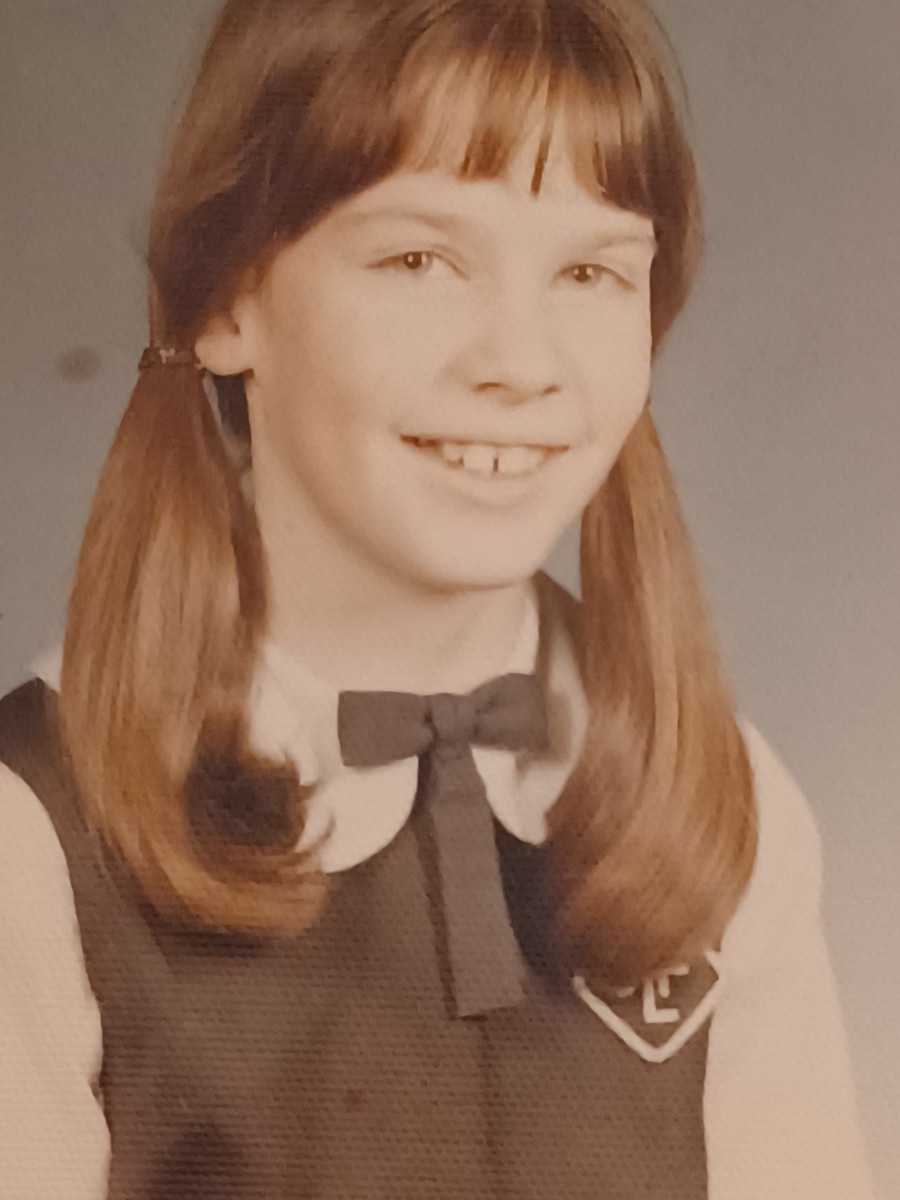 She was never going to pick me, no matter how many holy cards I collected. Each of those ‘prizes’ (like baseball cards, but with saints) represented either an outright victory or runner-up status – the last kids standing in a classroom spelling bee. I was among the top spellers in my grade school. But when it came to representing Our Lady of Fatima School in the Delaware County Bee (in suburban Philadelphia, Pennsylvania), the first step toward the National Spelling Bee in Washington, D.C., I was a perennial bench-warmer, part of the practice team that honed our would-be champs. Still, a girl can dream, right?

Beginning in 6th grade, I was one of the nerdiest kids in that Catholic school. About eight of us spent a few lunchtimes each week throughout the spring being coached to spell fancy words by our principal, Sister M. Constantia. Sister had a mighty speaking voice. It wasn’t a pretty voice, though, especially when she sang (screeched) hymns with all her heart in church, or, worse, over the school PA system, or worse yet, broadcast from the school PA system into the surrounding neighborhood as we practised for the May procession, occasionally stopping traffic on South Avenue.

Sister’s enunciation was sometimes less than perfect. This usually happened when she intentionally mispronounced a word she would have preferred to skip, despite its listing in the official National Spelling Bee practice book. Her mouth would move on her face as though she were gnawing on the word, trying to dislodge it from behind a molar. Case in point: bikini, which Sister refused to define or use in a sentence and pronounced as ‘bick´-uh-nee’, pretending that she, and we, had never heard it before. Some weeks later, she took her sweet time explaining forsooth in unflinching detail, then attempted to glide right by geisha. Before long, our little lunch club had a secret slogan: ‘Forsooth, my geisha girl has lost her bick´-uh-nee.’

Through three springs, I hungrily ingested thousands of new words, along with countless peanut butter or cheese sandwiches, around a well-worn folding table outside Sister’s office. While other kids tore around the schoolyard or practised double Dutch, we perched on metal folding chairs and memorized words like distichous and saponaceous, which had tripped up erstwhile national finalists. But we also had the pleasure of tickling our tongues with sassafras, fortissimo, indubitable, isosceles, piccalilli, and tintinnabulation. After several weeks of practice, Sister would name the students chosen to represent us in the county bee: Lorraine Menichini (when I was in 6th and 7th grade), and my good friend Valerie Fusco (when we both were in 8th). Perhaps I wasn’t picked because I repeatedly muffed forsythia one year. We had this shrub in our backyard, but I never liked its flimsy yellow flowers and could never remember its name. I thought of it simply as third base for our wiffle ball games.

Who needs horripilation when goosebumps does the trick?

I still have one official practice book, my name inscribed in a loopy 11-year-old hand, with occasional accent marks over syllables or penciled notes to help me remember tricky words. The edition is from 1970 for the 43rd National Bee, nearly a quarter-century before ESPN first broadcast this ‘educational competition’. I was a spelling-bee-wannabe(e), 36 years before Akeelah came along and made spelling bees seem almost cool for a minute. Occasionally, I flip through those now-musty pages, loaded with syllables I’ve never again encountered in a lifetime of working and playing with words. Rare earth metals abound, as do medical and architectural terms – words that appear only in unabridged dictionaries and never in real life. Who needs horripilation when goosebumps does the trick? Also, it’s obvious to me now that Sister sometimes fudged her definitions, or maybe just landed in the right church, wrong pew. For example, next to genesis I scribbled ‘first book Bible’, and beside calypso I wrote ‘Mexican dance’. When pressed, she defined geisha as ‘a Japanese dancer’, earning partial credit while proving incontrovertibly that she’d tried to skip it on purpose. She certainly was consistent with her biases and blind spots.

Still, she gave up all those lunchtimes to coach us. She probably lit votive candles for days leading up to the County Bee, praying for the glory of a win for her little parochial school.  Sister C. was good stuff, if you could forgive her singing. When she wasn’t tutoring us, she was busy conjuring a library and a science lab, launching a science fair, adding advanced math classes, and (of course) planning the next May procession.

I no longer recall – it has been half a century – if any of our spellers ever won at the county level. I do remember sitting in the auditorium of a middle school a few towns over and cheering them on. We never sent anyone to the National Bee, but maybe we came to within one or two letters of achieving that dream – say on ustulation or fuliginous. I lost track of my fellow spellers decades ago, although Valerie Fusco and I stayed in touch for many years. I wonder if the other spelling nerds still hold a special place in their hearts for those hours we shared committing to memory words like polissoir and quackery, haggis and calefacient? I wonder what, if anything, they did with all those words.

I can’t quantify the impact my spelling-bee years had on my journey to becoming a writer. I was already smitten with words long before I received the note in Sister Constantia’s impeccable penmanship inviting me to join her spelling circle. I recall salivating over grade-school reading comprehension tests, which I consistently aced. And our modest school library likely did more than the spelling bees to spark my literary aspirations. Yet five decades later, I still feel a frisson of pleasure recalling the seemingly endless supply of new words to learn, the allure of foreign languages, the camaraderie among students and principal, the thick dictionary at Sister’s elbow, and the unspoken incantation that hovered over every practice session: ‘Say the word, spell the word, and say the word again’.

I always will be glad I accepted Sister’s invitation. I never was her favorite speller, but maybe she saw the beginnings of something in me that would take a while to bloom – more chrysanthemum than forsythia. When she placed that first freshly printed Scripps-Howard Newspapers practice book into my hopeful and, possibly, trembling hands, I embraced the promise of scholarship described on page 1: ‘to help boys and girls improve their spelling, increase their vocabularies, and develop correct English usage that will help them all their lives.’ Unless, that is, they are in need of exotic entertainment or shopping for swimwear.

Eileen Cunniffe writes nonfiction that explores identity and experience, most often through the lenses of travel, family, and work. Her writing has appeared in four anthologies and many literary journals. Her first book, Mischief & Metaphors: Essaying a Life, is forthcoming with Shanti Arts Publishing in 2023.