‘Whose bloody idea was this, anyway?’ I scowled at Diana as she tucked the rug over my knees. ‘Who thought it would be fun to do this today?’

‘Aunty Rose.’ Diana pulled the cardigan round my shoulders then wheeled me a bit closer to the cliff edge. ‘And I don’t think she thought it was going to be fun. She just figured you might like everybody together today – moral support for your results and all that.’

I twisted to look at my sister.

She shrugged. ‘I know. It was a shit idea. I did try to tell them.’

‘Well I hope they all enjoyed seeing me pick up my two Cs and four Ds,’ I said. ‘We love a good failure in this family.’

‘You’re not a failure, Tabbi.’ Diana clamped on the brakes. ‘You did OK – considering the circumstances.’

‘Anyway,’ Diana nodded towards Aunty Rose who was tottering in our direction from the car park, clutching Dad’s arm whenever her heels sunk into the grass, ‘the whole family is here now. Let’s get it over with.’

The whole family wasn’t an impressive crowd. There were six of us in the core: Mum and Dad, me, Diana, Aunty Rose and Grandma. Then there were two additions in the form of Diana’s boyfriend and their baby, and one subtraction. There, in Grandma’s hands, was Grandpa, squatting in his urn, an improbably small heap of ash.

Grandpa had been dead three months already, but what with Diana being monstrously pregnant at the time, it had been agreed to delay the scattering for a bit. And somehow, it had been left to Aunty Rose to decide on the final date. Grandpa would have found it funny at least – the idea of us all traipsing into the school gym to pick up my exam results as if I was the star pupil, then hurrying off straight afterwards to scatter his ashes off Berry Head. He would’ve been tickled by how ridiculous it was. Grandpa loved the awkward and the difficult. It’s a shame he missed his own funeral. How he would’ve chuckled to see everyone trying to find respectable anecdotes to tell. How he would’ve loved to watch the vicar, solemn-faced at the door, hearing a stream of beautiful service, Father, while trying to work out how he could refuse the invitation to join us in Grandma’s front room for tuna sandwiches and mushroom vol-au-vents.

I’d always been a bit scared of Grandpa. Not because he was fierce or sinister, but because he was loud. Loud and rude in a way I wasn’t allowed to be. He always told everybody that Grandma had married beneath her, and we’d all laughed along, knowing, in our middle-class way, that he was right. None of the rest of the family guffawed and slapped their thigh when somebody let slip a fart at the dinner table. Nobody else spoke his language of winks and elbow digs. He wasn’t cruel, but he enjoyed discomfort, loved watching people try to work out how to behave properly. He loved pulling at the stitches of convention, loosening the seams just enough to have everyone scrambling to keep the stuffing in. He was unsettling in a way nobody else’s Grandpa ever was.

‘Darlings!’ Aunty Rose waved us over and planted scarlet kisses on our cheeks. ‘This must be so hard for you. We all miss him terribly.’

Diana and I nodded and mumbled the right noises. Rose twittered a little more at us, then even she fell silent. For a minute we stood there, huddled against the unseasonable east wind, waiting for somebody to speak. If nobody said anything meaningful – if we just opened the urn and tipped Grandpa over the cliff edge – it would feel too much like waste disposal. If we were all back in our cars in less than 10 minutes, it would feel disrespectful. The only person unfazed by the uncertain mood was baby Ebony, asleep in a sling against Angus’s chest. Dad jingled the car keys in his pocket, Mum rummaged in her handbag for something she didn’t need, and I sat in my ugly NHS wheelchair waiting for it to be over – waiting for the only other person who knew what it was like to have a broken heart to be scattered on the wind.

For all our differences, Grandpa had been the only one who understood me after my diagnosis. Everyone else had been relentlessly positive. Even when I was leap-frogging my way up the heart transplant list with every hospital appointment, they were still trying to jolly me along, talking about the future as if they could guarantee my place in it by the power of their strained smiles. Not Grandpa. He waited until we were alone one evening, both slumped, breathless and tired on the sofa, before nudging me and saying, ‘It’s shit, isn’t it?’ Tapping his ribcage with a bony fist, he glared at my still-flat chest and shook his head. ‘Right buggers these hearts of ours.’

‘Are you going to get a new heart too?’ I said.

His laugh was a choke. ‘Too late for me, Babs. You’re on your own there.’

There was a moment of silence before I blurted, ‘I’m scared, Grandpa.’

‘Aye. It’s no small thing having a new heart.’

‘But what if they don’t find one in time?’ I waited for him to do the grown-up thing of telling me that there was no point thinking like that and of course they’d find me a new heart. I wanted him to give me a sign, some small gesture that it was all going to be OK.

He sighed deeply and reached over to squeeze my hand. ‘Then I guess you’ll be as dead as a doornail within the year. So let’s keep our fingers crossed, eh?’

Four months later, as we gathered on the clifftop silently willing Aunty Rose not to launch into the story about Grandpa and the Blackpool donkey for the hundredth time, there was a sudden bleeping from Mum’s handbag. For a few seconds nobody knew what it was. Then everybody knew. Diana’s fingers dug into my shoulder.

Mum pulled the pager from her bag and stared at the screen. She didn’t look at me. Without a word to anybody she walked a few steps away from the rest of us and dialled the number. When she turned back, her face was tight.

‘They’ve got one, Tabbi.’ She gave me a too-bright smile. ‘They’ve found a heart for you. They’re sending an ambulance here to the car-park to get us.’ She looked at Grandma. ‘Sorry. We have to go.’

Grandma’s gaze, fixed on me, slowly travelled to the urn in her hands. Then she gave herself a shake. ‘Right, best get this done then.’

Nobody tried to be meaningful anymore. The urn was passed between us like a hip flask at a miner’s strike. Each of us took a handful of ash and our place in line, looking out across the sea. I tried to think of Grandpa, but my head was full of other things: what-ifs and maybes and this-time-tomorrows.

It was a pity nobody had thought to check which way the wind was blowing. As we released Grandpa to the salty air, he found a stray current and whipped away to the left, scattering himself across the grass, settling on sleeves and shoes. Two curious tourists on a bench downwind of us, flinched and shielded their ice-creams. On one side of me I heard Diana’s stifled snort. On the other, Angus wiped something from the corner of his eye.

I looked down at the fleck of Grandpa resting on the arm of my wheelchair and, for the first time in months, I had the urge to laugh. Grandpa’s last joke – the most crass of all. Yes, it was going to be OK. 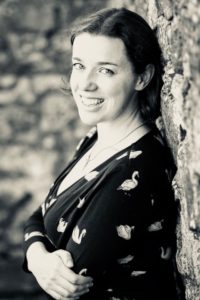 Chloe Banks is a writer and day-dreamer who lives on the edge of Dartmoor with her husband and two young sons. Her first novel, THE ART OF LETTING GO, was published in 2014 (Thistle Books). Since then she has mainly concentrated on flash fiction – gathering a handful of shortlistings, prizes and publications along the way. Find out more at chloebanks.co.uk, or say hello on Twitter @ChloeTellsTales.