My eyes have never been more open, my body never more alert. I am Lady of the Night, Slipper Shuffler in Flame Red Pyjamas, Nocturnal Master of the Lemon Tea, (Once Binge Watcher of Game of Thrones).

As I slip the teabag into the bin underneath the sink, I hear the sound of fast-man-on-asphalt. I look at the blackness through the basement window and a second later, sneakered feet fly past my eyes. The night runner has again chosen flight over fight.

I choose tea and ginger biscuits over both and head back to bed.

So here we are. My 4am demon has returned to his old ways, lured back, no doubt, by The New Yorker and a hole in my bank account.

It could also be my guilty conscience. I snapped at Patti today.

We were in Peter Jones looking for a new alarm clock and I think she was getting bored with me taking ages to decide between a beautiful one from Links that I couldn’t afford and a white plastic model, which cost seven pounds.

‘Why don’t you just use your phone?’ she said.

‘Are you seriously asking an insomniac why they don’t bring an iPhone into their bedroom? I replied.

Afterwards, over tea in the garden at The Phene, she told me my male energy was very profound today which made me want to punch her.

Male energy. What? Because of a quick come-back? How is that more male than female?

In fact, I could do with being a little more male. Had I been, I wouldn’t have ended up in such an embarrassing situation this evening when The New Yorker and I found ourselves on Battersea Bridge.

‘How far to your house?’ He asked.

‘Just down the road.’

I got rid of him. Stuffed him into the first cab. Not because I wanted to. Quite the contrary. But during dinner at the Italian in Hans Road, he never went to the gents once and afterwards we’d been walking for over an hour. So, I figured if we went back to my house, he might want to use the loo and I couldn’t risk that. I need to get a new toilet before I can let him in because last year I dropped a 100ml bottle of Lancôme Trésor down there that my parents had given me for Christmas. It caused the porcelain to crack. And the crack is about six inches long and doesn’t look like a crack. And I don’t want The New Yorker who is always well turned-out to think I’m a disgusting person.

It was awful standing there on the bridge in the sunset trying to think of solutions. They were limited to: A) pretending everything was fine and risk him fleeing in search of a hygienic date, B) unscrewing the light-bulb in the celling and the two mirror spots, which would take ages. Or C) telling the truth. Which would be weird. I cringe as I sit here in my bed with my empty biscuit tin, composing the sentence. ‘So, look when you open the toilet lid you might see..’

If I had male energy, would I care? I doubt it.

In fact, most males I know wouldn’t give a rat’s backside.

But I did get a new alarm clock. Two, actually.

I admire the pretty travel alarm from Links that has replaced the clock-radio. It set me back eighty pounds, but it’s so elegant with its tiny buttons and clever design. Hard to operate though, so I ended up also buying the white plastic one for back-up. The latter is now in the drawer because it makes a ticking noise, which unfortunately, I can still hear. In the drawer. Wait.. there it is. It’s not just a tick. It’s a loud tick. It’s a tick that could bloody wake up Mrs Niederman next door should she be unfortunate enough to have placed her bed against the wall.

How extraordinary in this day and age that nobody has invented a decent alarm clock. I swing my legs out of bed, searching for slippers in the darkness.

I rummage in the cupboard below the stairs and dig out the old monstrosity. Even without electricity I can still see the red digits. I don’t know whether to despair or be impressed.

Together again. Slayer of optimism and the Mad Queen.

Elizabeth Sand is a regular contributor to Funny Pearls. You can read the previous instalment of the series about Lizzie here: 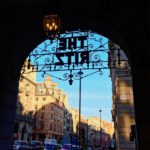