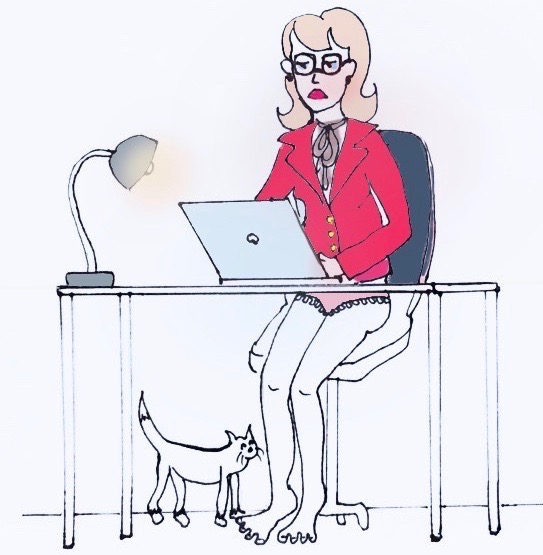 My superpower is connecting the dots. I’m a blue-sky thinker, the last recruiter said, which is another way of saying I’m a woman. The only woman in the virtual boardroom.

Geoff’s sunburnt face fills my screen. He’s wearing his salmon-pink golf shirt, the synthetic one that shimmers on camera like scales on a fish. Everyone else’s mikes have been muted. ‘Evening, team,’ he says. ‘Hope you don’t mind me calling this emergency meeting, but I want to get the jump on this exciting development before the competition catches on.’

I open gallery view. A panel of exhausted faces assemble at the top of the screen. My colleagues shuffle about on their chairs, sip from novelty mugs that are probably full of gin, and self-consciously rein in their body language. We’ve all been summoned to Geoff’s emergency meetings more times than we care to remember.

‘Let’s cut to the chase,’ Geoff continues. He screen-shares a spreadsheet that looks very familiar. A cut and paste job on the one I emailed him yesterday. ‘After careful consideration, I’ve decided we need to pivot on the way we’re handling our accounts. I’ve come up with a more efficient method to keep track of our important clients. This could be a real game changer.’

So, that’s what he means by picking my brains. I unmute my mike. ‘Would you like me to elaborate, Geoff?’

He mutes me again. ‘Thanks, Elaine, I’ve got it covered. Going forward, if you’d like to set up an audit, that would be great. We could circle back to the results in a month or two.’

I eyeball Geoff through the webcam. His glowing scalp catches the light. He should definitely wear a hat when he’s playing golf to protect that bald patch. His skin is covered in freckles and moles like an elaborate dot-to-dot puzzle. I concentrate on the sunspot on the top of his left ear, connect it to the mole on his collarbone. His head tilts unnaturally to the side, momentarily sliding out of view. When he shuffles his chair sideways on its castors and peers back up at the screen, his left ear is fixed to his shoulder.

His mike is still unmuted. ‘You know, you should smile more, Elaine.’

His features blur as I set my mind to the task. Freckle to freckle, mole to mole. His head tilts forward and his arms fold around his torso, hands tucked neatly behind his back. The end result is a work of art. The Brady Bunch faces at the top of the screen are entranced.

I’ll admit that turning the CEO into a giant penis isn’t the most mature choice I’ve ever made, but ten Zoom meetings in a day will do that to you.

I look up at the camera and smile sweetly.

Lisa Kenway is an Australian writer and doctor. Her short fiction has appeared in the 2020 National Flash Fiction Day Anthology, Meniscus Literary Journal, Brilliant Flash Fiction, X-R-A-Y Literary Magazine, Ellipsis Zine and elsewhere. You can find her at www.lisakenway.com or on Twitter @LisaKenway