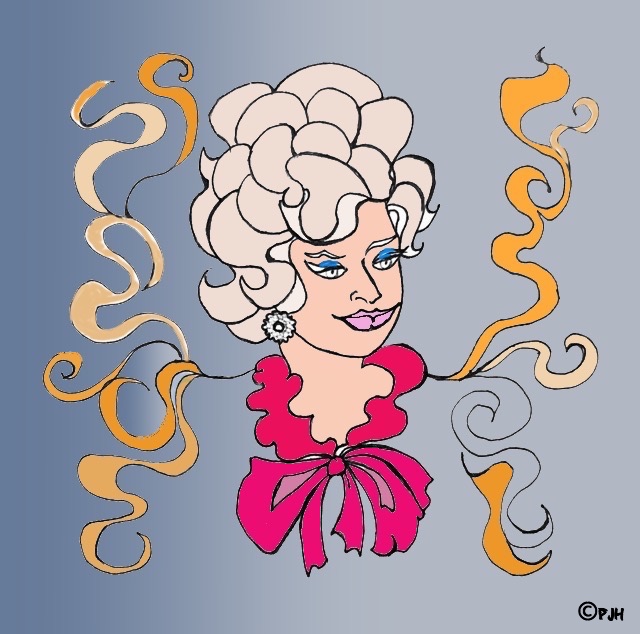 ‘What on earth are you wearing?’

‘I’m just trying on my costume ahead of the auditions.’

‘Oh, bloody am dram. I see.’ Jeffrey left the room.

Penny squeezed liquid foundation onto the tip of her finger. She’d bought a special pot. Paler and thicker than she would normally wear. She’d heard Arnold, during the last production, giving tips to the leading man. Penny had thought they were probably bunkum but, if she were ever to get a lead, she would have to impress Arnold. She spent another forty minutes getting her make-up right: a little more eyeshadow, the brows fractionally higher. The end result was ok but not perfect. And she’d have to work on her hair.

No time to think about hair. She scrubbed off the foundation, peeled off the false eyelashes and ran downstairs.

‘It’s twenty to six. Surely dinner should be cooking by now?’ Jeffrey was sitting in his armchair by the window, reading the paper.

‘I was just going to do some slices of yesterday’s roast beef and a salad. It’s so warm. I didn’t think you’d fancy anything cooked.’

They ate with only Jeffrey’s chomping punctuating the customary silence. Then Penny cleared away and Jeffrey went back to his paper.

The following afternoon, Penny spent a good three hours working on her audition look. She glanced at the clock. It was 5:15. Jeffrey would be home soon and expect dinner to be cooking. The salad trick wouldn’t work two days in a row. Sausage and mash! And if she fried some onions, it would make the whole house smell of cooking. She ran downstairs and began preparing dinner.
The front door banged.

‘You need to sort this shirt out. There’s blood on the collar from when I cut myself shaving.’

No ‘how was your day, dear?’. Penny didn’t usually mind. But today it irritated her.

‘I hope you didn’t hurt yourself.’ Her voice had a hint of sarcasm.

‘I beg your pardon?’ he said. Penny turned from the stove and looked at him. ‘Why have you got all that make up on? You look like a clown.’ She stayed silent. ‘Are you going to answer? Are you going to apologise for your tone?’

‘Cold water,’ Penny called after him.

‘Cold water on your collar.’

She stirred the onions, holding her breath. In twenty-nine years of marriage, she’d never spoken to Jeffrey like that. 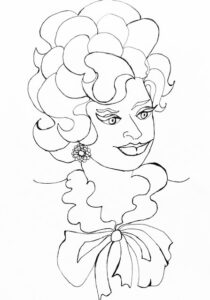 The following Saturday morning, she decided to tackle the matter of audition hair. She’d ordered a few wigs in different colours, but they needed back-combing, piling and spraying into the required bouffant. There was something therapeutic about back-combing. It was hypnotic, so she worked on the lilac wig for a couple of hours.

She squeezed the cap over her own hair to make it as flat as possible and pulled the purple confection onto her head. Looking at herself in the mirror, she gave a huge snort and burst out laughing. The sound of her own laughing made her laugh more. The last time she’d laughed like this was probably at school. Before she’d met Jeffrey. Now, though, her laugh had changed and she couldn’t help thinking that she sounded like a braying donkey.

‘What’s all that bloody noise, woman?’ Jeffrey was waxing his cricket bat downstairs.

Penny snatched off the wig and looked at the middle-aged woman with the downturned mouth in the plastic cap.

The auditions were on Monday evening. She’d asked Arnold for a late slot because she would have to give Jeffrey his dinner and clear everything away before leaving for the Church Hall. She didn’t tell Arnold that she would also have to assemble her look. She was going to surprise him. No one ever dressed up for auditions, but she wanted to give herself the best chance.

At 8:30 p.m., Penny was ready. She clicked the front door gently shut behind her and heard Jeffrey calling as she tip-toed down the path.
Penny always told him where she was going and what she was doing, but she didn’t answer.

An hour and a half later, Penny was back home. She banged the front door behind her, not caring whether she woke Jeffrey who was usually in bed at this time of night

‘You’re back then.’ He was in the living room.

‘I said, “very observant”. You win today’s prize for stating the bleeding obvious.’ She stood before him in full make-up, foot high wig and lilac pussycat bow blouse.

‘On success, yes. And by the way, cast your mind back to standing at the altar with me. You might remember that you said ‘I take thee, Penelope Mary’ not ‘I take thee, woman’. I’ll thank you to use my name in future.’ She leaned over Jeffrey in his armchair. ‘And you can close your mouth. It’s summer and there are flies.’

She went into the kitchen and poured herself a whisky. Taken aback, Jeffrey followed.

‘I got the part. Thanks for asking.’

‘We’re doing an episode of Fawlty Towers and I’m playing Sybil. Arnold was so impressed with how I’d – what did he say? – “inhabited her character”.’

Jeffrey nodded. ‘I can see why he’d think that.’

‘He says I just need to keep it up through the rehearsals and the performance.’

She looked hard at Jeffrey. ‘I think I’ll be able to manage that, don’t you?’

‘Arnold says I have real potential. And if I can pull it off for this play, I’m a firm favourite for the next big part. So I’m getting into practice for that one already.’

‘And what is the next one?’ Jeffrey asked. 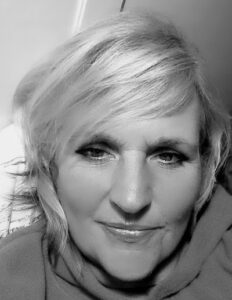 R. J. Kinnarney is an author and tutor. Her first children’s book, Abigail Aces Acting, is currently being enjoyed by children and by adults who’ve refused to grow up.R. J. Kinnarney’s short story, The Blue Bowl, was runner-up in the Daunt Books short story competition. She has been longlisted in Retreat West flash fiction competitions and her work has appeared in The Write In, 81 Words, 50 Word Stories, The Daily Drunk and 100 Words of Solitude. She is currently working on a novel, which looks at attitudes to war, together with changing methods and speed of communication.