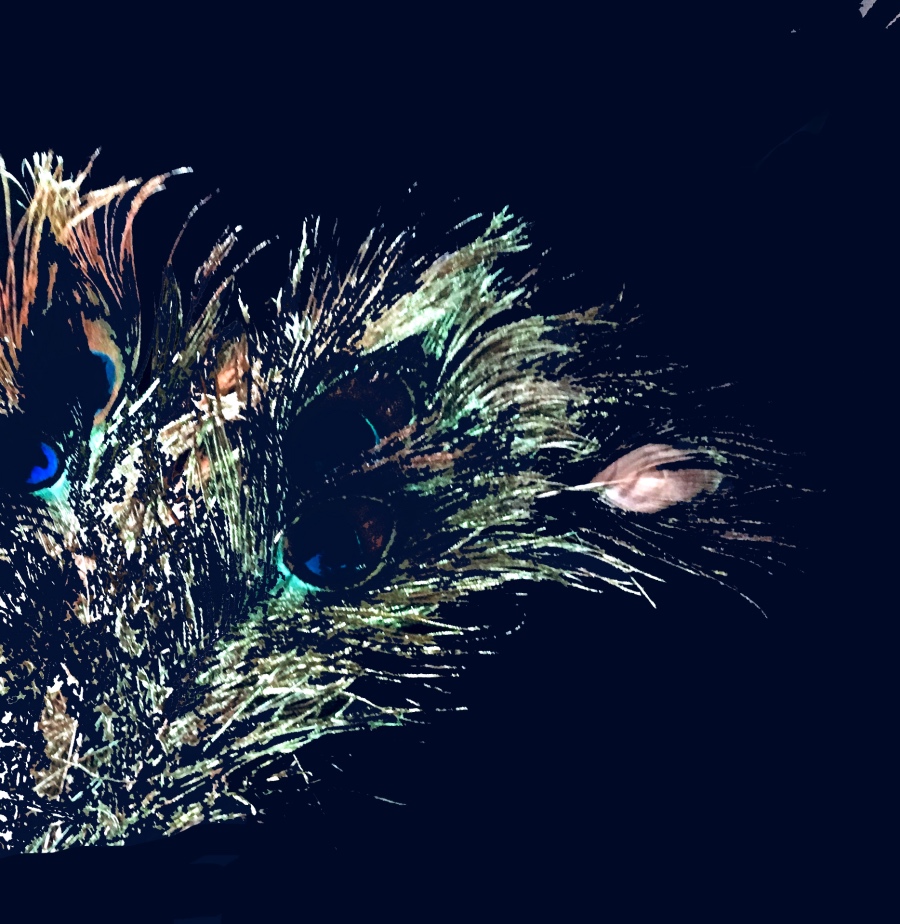 On the kitchen table a seagull stood, picking at last night’s pizza. It was tugging at a string of cheese, like it didn’t give a shit. In scale it was huge, solid, terrifying – as big as the plasma screen pinioned to the wall in the living room and the artificial box trees outside the front door.

Can it have cheese? I thought to myself and then I made a low long groan, closed the door slowly and quietly so as not to disturb it (why?) and galloped up the wooden stairs, my head tucked into my chest.

He was pretending to sleep. I knew he was pretending because there’s always a subtle difference, isn’t there? His hands were just so on top of the duvet, like they’d been placed there by a photographer’s assistant.

‘Can you help me with this please? I don’t know what to do with it.’ I put my hand on his foot, or at least where I thought his foot was, under the duvet. ‘Please. You know how I feel about birds – please.’

He edged his foot away from me. His head was hidden, squashed between two of the many duck egg blue pillows that thronged the big quilted bedspread. But I could see his arm and the just-so-hand and it made me furious. The smug little black hairs on his wrist made me furious. Then I remembered why I had said what I said last night and, for the first time since saying it, I thought: good girl.

But there was still the problem of the bird in the kitchen. And that tiny shudder which passed through my body like sound through a tuning fork when I took in the bird’s black bead of an eye, wanton and hostile. And how, despite my unwillingness and the please no! formed by that long low groan in the kitchen, that eye had now slid into my personal archive of birds, stored in my mind-loft. Birds with which, through happenstance, I had been forced into unforeseen, unwitting and uncomfortable proximity since childhood. My synapses joined the dots; I couldn’t not think about the eye in the kitchen and, in turn, that eye led me to another eye – the first entry in my archive, this one from childhood: I was pushing my pram in the garden. Tiny Tears was asleep at last, so I kept walking and humming ‘Oh Christmas Tree’ to myself even though it was June. I turned the corner of the house and looked down at Tiny in the pram and then at the wheels because there was a pretty pink brooch on the ground beside it. Then I saw that the brooch had an eye. It was the navy-blue bulb-eye of a dead bald baby bird, looking up at me from the gravel. The bird had withered legs, dangling like cotton threads. From that night on, I slept with my feet scrunched up under my bum, so sure am I that baby birds, downy and trembly, are roosting at the bottom of my bed.

‘Please, Mark.’ There was a flutter and a crash, heavier than a normal thing, coming from the kitchen. I low-moaned again. Under the duck egg blue, he crumpled. ‘Mark.’

Mark, who knew how I was – how, in any garden, park, or forest, my senses were alert for that blank corpse-eye in the undergrowth, how I’d seek out the flattened patch of grass which harboured a broken wing or a set of wormy entrails laid bare. How, to me, all discarded litter was threat, how at distance, even a binbag blowing in the road looked like a crow in fragments. Everything, at times of stress, was birds, especially dead birds, and he knew that! In London, he’d been gallant, shooing the path clear of humpback, club-footed urban pigeons. He hadn’t laughed at Nandos in Euston when they descended. He’d taken me by the elbow and led me inside to the Paperchase so I could look at stationery and breathe again.

I knew that I probably was fine, certainly better than he was, because I realised right then that I’d got through the entire conversation without him seeing that I was wearing his fairisle walking socks, and this, as well as the fact that I had remembered to put on a pair of socks that morning rather than having to hoover crumbs off my feet with a dustbuster like I’d done the previous night, gave me a boatload of swagger.

He grunted and I, keeping my middle finger aloft like an erect penis and at eye height for the duration, mouthed a ‘fuuuuuuck yooooooou’, and moonwalked out of the room in his comfy silent socks, smacking neither shoulder bone nor arse cheek on the door frame as I left.

Down the stairs, then, I started to sing in a voice that was high and ‘through the nose,’ as my singing teacher would have described it, show tunes from the thirties, songs that pumped blood back into my heart and steered me clear of thoughts of the kitchen, the pizza, the bird. I swerved between melodies because it struck me, in the act of singing, that I really did no longer care about the man with the wrist-hairs under the bedspread in the four-poster, in the borrowed–from-the-online–world-holiday-cottage on the edge of England.

I became quiet when I reached the kitchen door, and the algorithm started to hum and shudder. It wasn’t hard to link this silence to that time in Crete. With a boyfriend, a Craig as it happens, and a proper Craig at that, aged 24, getting raw, stripy skin by the tiny little pool in the complex, listening to Café Del Mar on the iPod and eating fried egg buns from the onsite bar. I was having one of those delicious milky sun-heavy naps and when I opened my eyes, at the bottom of the lounger was a little beige feathery bird, a beak’s distance from my big toe. It was pretending to be still like his just-so hands upstairs, but those little birds are kinetic, so I knew it was struggling with the urge not to perch on my toe. And the thought of that happening could only be replaced with a rip of a scream travelling through me until my eyeballs sprung out of my head. What I did (because I liked Craig and I didn’t want him to know about my bird archive or ‘phobia’, as experts would call it) was a loud fake cough which startled the bird into hopping down onto the ground. Then, one eye on the bird at all times lest it went under the lounger and attacked my undercarriage, I swung my legs over to the side, slapped my feet on the paving and gave a long and powerful post-nap sigh. The bird flew to the nearest plane tree and merged with the burnt bark.

Craig didn’t last, but that particular fear of the sudden up-close, silent stealth bird, the how-fucking-long-have-you-been-there-Jesus-bird, too still to be friendly and unenquiring, had lodged in my archive.

But there I was at the bottom of the stairs in front of the kitchen door. I pressed my hands on its distressed wood panels, imagining that I looked like a foreign dignitary – a good one, like Obama – at the Wailing Wall. I wanted to respect this moment and my courage.

I opened the door slowly, just in case the bird should leap at me. Just in case I caught its eye. Just in case, for some reason, it was poised above the door and should choose to plunge its passata drenched claws into my cranium, finding the fontanelle on first strike.

And then of course, I remembered the meat pink talons of that errant pigeon, trapped on a soupy-sweaty Chancery Lane platform so packed that it had hovered overhead close enough for me to feel my hair swoosh, and I’d really had to push down on my big terror at sharing its energy. It could have landed on me at any moment, so I’d had to fall down and flutter my eyelids. When I told them that I had ‘mild epilepsy’ they took my pulse and I’d felt loved. And when I was upright again, the pigeon was gone.

At first I could not see it because the bird was on the windowsill, sitting above the big double ceramic sink, the windowsill of the window out of which I had smoked a fag and sung ‘State of Independence’ while looking into the cold darkness late the previous night. This was when Mark had gone to bed, after I’d said what I said.

I clapped my hands. It didn’t move. I growled. It bent its legs, took flight. I didn’t watch; I didn’t care where it was going. My sole aim, of course, was to get to the sink and close the window, while touching as little of the room as possible. It was all birds then. I contracted my foot muscles, so my toes buckled under, then hobbled across the tiles and slammed down the frame. There was a big eggy shit in the sink (the seagull’s, not mine) and I sighed.

I’d have to get a taxi to the station.

Leaving the kitchen, I pulled on my trainers (I’m keeping the fairisles, thank you very much) and my parka, dragged my rucksack up onto one shoulder and left the cottage behind me.

Stefanie worked as an actor for ten years before retraining as a teacher.  Her debut play, Blue Lines, won the Hive Award at Greater Manchester Fringe in 2019 and is currently being adapted for the radio. Her short stories and flash fiction have been published in Dear Damsels, Cabinet of Heed and Mslexia.  Stefanie is an alumni of the Write Like Grrrl course. She lives in Prestwich.