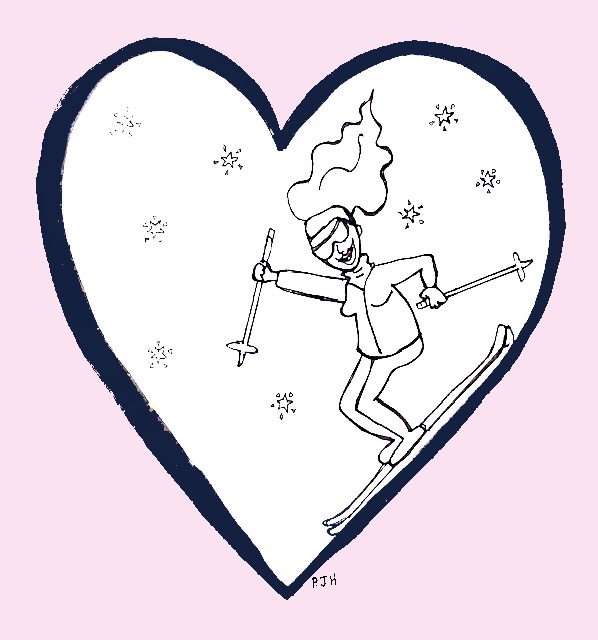 ‘So, do you want any feedback on your skiing?’ he asked. ‘Like help with your technique?’

We were about two hours into the drive, not far from the mountain. From the passenger seat of his luxury sedan, I looked at the guy I had spent the last two months dating. His blue eyes twinkled when he returned my gaze, but he was clearly not kidding. I nearly spit out my coffee, equal parts amused and astonished.

‘Really? How do you think this ends for you? With you getting laid?’

He chuckled. ‘Ok, ok,’ he said, amiably silent for the remaining half-hour drive.

I knew that he wanted to size me up, see what I brought to the hill. I was not sure myself. Having grown up skiing with my family, I wasn’t a bad skier, but I wasn’t excellent either. I could get down just about anything, but I was afraid of steeps and speed.

After separating from my spouse of 15 years, a return to skiing seemed like the next illogical thing for me to do. Earlier that month, for my first day out, I had revisited the mountain where I had learned to ski as a four-year-old. I felt awkward and ungainly, but I got down the hill. This was my smartest move in a string of questionable decisions that had led to me heading out on a long day trip with Matt, the first guy I had dated since the split.

We got off the lift at the top of the mountain for our first run of the day together. Our first run together ever. He motioned for me to go ahead.

I imagined myself at the start gate at the top of an icy, challenging Super G course. Banging my poles together to remove the excess snow, I planted them on either side of me at the top of the headwall. In my mind, I heard the announcer: ‘Courtney Cole, returning to the sport after a decades-long absence. Will she dazzle the crowd or will her course end in disaster?’

This run could result in hilarity or calamity. Or both. It seems obvious that this should have struck me before I was standing at the top of a steep headwall on a cold December day in rural Vermont, but all of it – the skiing, the dude, the day trip – had happened too fast. This was not a World Cup Super G, yet the pressure was on: a single run to determine whether leaving my marriage, dating again, and embracing fun in the midst of the fear and heartbreak of divorce, were the right things to do. In that moment, I catastrophized that I might be embarrassed or injured or simply unable to keep up. None of those things happened. What never occurred to me was that something else altogether might happen: That I might fall in love.

The icy slope dropped away steeply below me, and the wind blew through my jacket, the one I’d had since college, now ill-fitting and useless. The cold was clarifying. What was left to do now, except just to ski? I sighed, pushed off, and pointed the tips of my skis down the hill.

I felt my skis against the snow, the comfort of a hard and sharp edge through each turn. As I continued down the slope, the snow, the skis, my limbs, balance and body all clicked together. I suddenly felt myself very focused and very fast. Gaining speed and confidence with each turn, my wry half-smile spread into a grin stretching from earlobe to earlobe. I arrived at the bottom with a snowy shush, my heart racing wildly as I came to a powdery stop.

Amidst the tumult of divorce and dating, a life upheaved and reconstructed, in that moment on the mountain, I was alone, alive, and free. It felt like a response to every doubt: was I doing the right thing, would I survive this, could I fashion a happier life? The run answered all these questions, as well as Matt’s. He was a turn behind me – a beautiful skier, as I had suspected – and arrived a beat later, with a grin to match mine.

‘Well, as it turns out, I have no feedback for you on your skiing. Let’s go.’ He turned and pushed off toward the lift.

When we got to the top, I felt more excited than nervous. I flew down the mountain, letting my edges dig into its sides. As my body adjusted to the skis sliding along the frozen scape, I gained speed, leaning into the slope and pitching forward down the run.

In that moment, my body and the mountain connected. The motions felt familiar and yet completely new. The snow, the steeps, the mechanics of movement – these were all the same – but the way my heart felt, turn and after turn, was different. My mouth again stretched into a smile, the one I always wear when I am skiing. I realized that I was not afraid. Not even a little. I felt alive, excited, and powerful, knowing the risk of skiing and also the rush.

That winter, Matt and I went on to ski at dozens of resorts across New England and Utah. Sometimes, while on the lift, we would see a man trying to teach the woman he was with to ski. Matt would shake his head and say, ‘Definitely not getting laid tonight’, and we would laugh.

Thus began the big and enduring love affair of my post-marital life. Not with Matt. With skiing.

As it turned out, the big crash I’d worried about at the top of that first run with Matt happened much later in the season – off the mountain. He and I had a spectacular finish in early April on the drive back from a weekend in Vermont.

Looking back, I see that leaving my marriage and my new relationship with skiing were not that different. I know who I am now and the mountain hones and honors my wildness. When I ski, I hover on the edge between exhilaration and recklessness, surviving and living, believing and doing. And although Matt and my relationship didn’t last the season, my love affair with the sport did.

Skiing and I are back together after a long hiatus, and things are serious.

Courtney E. Cole writes slowly and skis fast, fueled by hot coffee and cold weather. She is raising two young boys in Boston, and they are often found in the lakes and mountains of Maine. Her current hobbies include text banking, backyard baseball, and remote schooling.