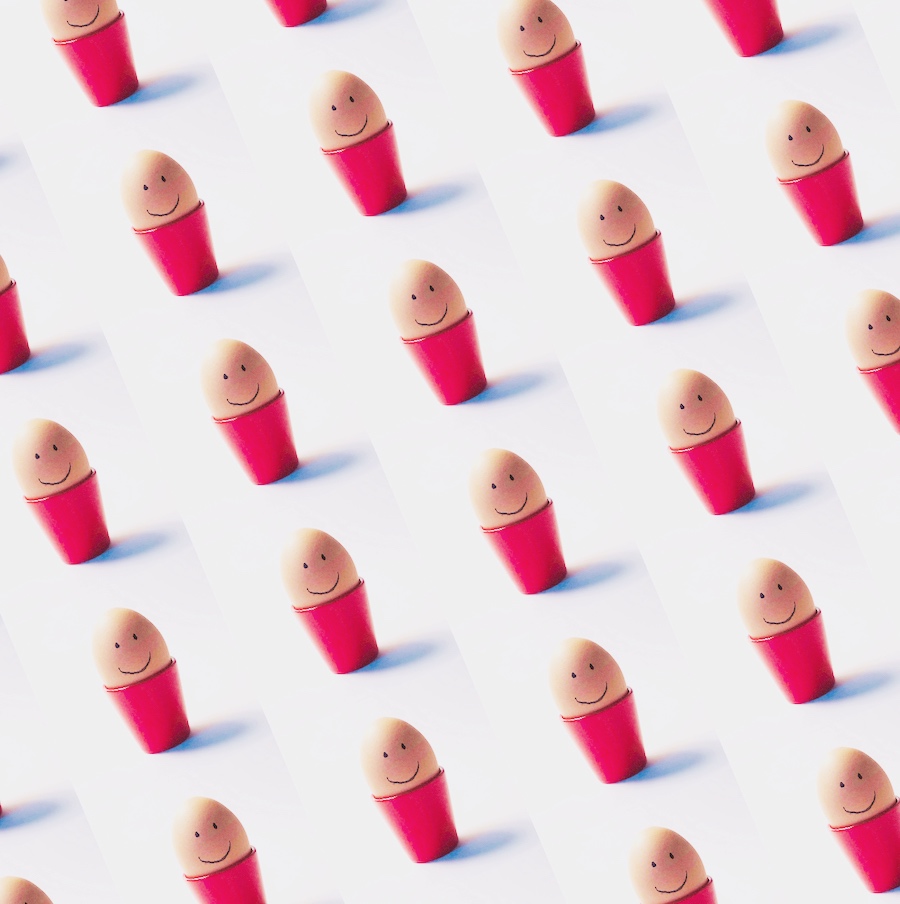 Zoe’s starving. In half an hour, she can meet the other trainees in the canteen. Definitely the best thing about working here. Though they do take the piss because she has a boiled egg with every meal, even when it’s curry (and what’s wrong with that?). Oh, and the staff toilets are pretty great too, with their elegant hardwood doors. In her old firm, where she worked as a paralegal, there was a mysterious person who would smear shit all over the fifth-floor Ladies but, fortunately, there is none of that here.

She’d better crack on with this case before lunch. Zoe reckons there is one file in every department that contains an unfathomable legal problem which is circulated among the trainees in perpetuity in the hope that one of them will eventually be clever enough to solve it. She suspects that she is now in possession of such a file, and that she was unlucky enough to be lumbered with it because she dressed up as Lord Denning at the joining party, when nearly everyone else went as Joy Division.

Effi can tell that Steve is having a bad phone call. His tone with Big Client remains even and polite but, head bent over the desk, his shiny bald patch is growing progressively redder. His previous trainee, Philip, found him a terrifying supervisor but Effi’s dad is Cypriot and she is used to explosive men.

The conversation is drawing to a close. ‘Yes, Big Client. I will, Big Client. Goodbye,’ says Steve. He replaces the receiver in its cradle, takes a deep breath, purplifies his face, plaits his fists into one great bulging knot and brings it down, hard, onto the equipment − or, no doubt, Big Client’s smug, demanding, imaginary face − several times.

When he’s finished, he looks over at Effi.

‘Bad phone call, Steve?’ she says. He seems pleased to have been asked for a change, and tells her all about it. Then he rings the helpdesk.

‘That helpdesk is utterly rubbish,’ says Steve. ‘My phone is broken and I’ve been waiting at least an hour and that useless Carmen still hasn’t brought me a new one.’

Philip was on holiday between the end of his last seat and the start of the new one, so – after a week of baptism by Krakatoa − is taking his first free moment to unpack his crate while his supervisor is across the floor, talking to a newly qualified, the one who wails loudly at night when she thinks no one is around.

Philip has put everything away where it belongs. Everything, that is, but the contents of a box half-filled with various papers, some loose, others in bundles of plastic wallets. Philip lifts off the lid, gives the contents a stir, sighs, and puts it back on again. This box has been his burden for 18 months now: he pushes it into the space under the far corner of his desk and tries to forget about it.

Gaynor − an associate he knows from university − comes bounding in. ‘Hey, you’re back! What are you doing?’

And, right there, Philip decides to unburden himself. He tells Gaynor all about how he’s been given papers to work on by various people and then not known where to file them when he’s finished. He doesn’t like to shred them, in case someone eventually needs them so, for now, they steadily accumulate and nip at his soul.

‘You mean your Box of Shame? Every trainee has one. Well, all the ones who won’t make partner. I sneaked mine above a ceiling tile after my final seat,’ says Gaynor. ‘Grab a chair.’

So Gaynor keeps watch as Philip climbs up, shifts a tile to the right, goes back for the box and nestles it into the ceiling. As he pulls the tile back into place, he feels his cares ebbing away.

‘Of course, we’ll probably get the sack when they find them,’ says Gaynor.

Sasha is having a quiet morning. Which is maddening because, no doubt, Corporate will finally wake up at 5 pm and remember to send her a thousand employment warranties to mark up by the end of the day. At least this hiatus will give her time to research wedding venues and perhaps she can even pop out to Hatton Garden after lunch to pick up her engagement ring.

Solomon is breathing heavily on the other side of the desk, his belly rising to his chin, no doubt playing Candy Crush, stringing out his time until his retirement next year, when he will finally enjoy his whopping defined benefit partner’s pension for six months before probably dropping dead of a heart attack.

‘I hear congratulations are in order, Sasha’.

‘Will you be losing weight for your wedding?’

‘No, Solomon, I don’t think I will. Because my fiancé loves me just the way I am. That’s why he asked me to marry him,’ Sasha doesn’t say.

Ten minutes later, they’re in the lift, off to a client meeting where Sasha will − woohoo − take notes. Solomon shakes a small, plastic box at her and looks quizzical.

Solomon pops one into his mouth and gives her a conspiratorial grin.

‘Top tip,’ he says, wagging his finger, ‘never let the client know you have bad breath.’

Well, at least she’s learned one thing from him this seat.

Charlotte shares with soon-to-retire, good-humoured head of department Jonathan but her supervisor is the terrifying Antonia who lives across the corridor. Charlotte’s only just started her Property seat (she refuses to say Real Estate, even in her head) and so everything she does is unfamiliar. It’s handy to have Jonathan to discuss any issues with before she raises them with Antonia, especially because she has inherited all her files from the useless but unfeasibly-attractive-in-a-Sloaney-way Penelope, the trainee who came before her.

Charlotte looks at the file again in puzzlement, then horror, and wills Jonathan to come back from his meeting before he leaves for his bi- or sometimes tri-weekly long-lunchtime trip to ‘the gym’. She says ‘the gym’ because Jonathan’s fleshy paunch and drooping posture suggest he’s never stepped foot in the place. Plus he comes back reeking of a particular type of aftershave he doesn’t wear on non-‘gym’ days and with a distinctive spring in his step and gleam in his eye which Charlotte knows from experience cannot be induced by a cheeky turn on the treadmill.

Jonathan returns at quarter to twelve and confirms Charlotte’s fears. Shitty McShitface, she says to herself, as she traipses across the corridor.

Antonia hangs up (today, it was the prawns) and fixes Charlotte with a steely look exclusively reserved for inept trainees, or her unfortunate secretary, who still cannot spell ‘judgement’ in the way Antonia prefers.

‘What is it?’ she finally says, then farts loudly.

Charlotte explains that someone appears to have completed the purchase of the Knightsbridge pied-à-terre for the Darling Daughter of Massive Client after the priority search had expired.

‘And, um, a third party has registered the property in its own name instead.’

‘What the fuck?’ she says, very quietly, and holds out her palm for the file. Charlotte hands it over in the same manner a zookeeper might offer a large hunk of meat to a saltwater crocodile.

‘Well, we need to resolve this before Massive Client finds out. That idiot Penelope was clearly just a pretty face.’ She looks Charlotte up and down as though examining an unsightly, but practical, coffee table. ‘Fortunately, there’s no risk of that happening with you.’ And, for the first time, Antonia smiles at her. A horrible, twisted thing that is truly appalling.

Charlotte is going to have to work at her spelling choices.

Zach’s at the departmental meeting, wondering how he can have a First in Law from Trinity College and still feel profoundly ignorant. Formalities dispensed with, they’re now at the stage where the juniors are supposed to learn something but, instead, the partners debate the obscure minutiae of pensions law among themselves without stopping to explain what a money purchase scheme is.

The second most junior partner, Tarquin, scoffs at the interpretation of a particularly fine detail put forward by the most junior partner, Ashok. There follows a heated debate where Tarquin and Ashok become ever louder and more pompous, while all the non-partners try to latch on to any part of a sentence they can understand.

Tarquin suddenly stands, unbuttons his close-cut Savile Row trousers and silk boxers, and slaps his gleaming testicles onto the polished wood of the table. They are hairless, of average girth, and unfeasibly round and taut. Ashok who, it is now revealed, eschews underwear, drops his own probably-purchased-by-his-wife-from-Marks-and-Spencer trousers. Ashok’s bollocks are considerably more voluminous, but exceptionally hairy and of a less defined, wrinkly shape.

Zach calls it a draw (in his head, of course, because nobody asked him), and reminisces about those Swedish meatballs you get from IKEA because it’s nearly lunchtime, he’s feeling peckish, and all the biscuits are at the other end of the table.

Sasha’s queuing in the canteen when Zach comes over to her, beaming. He speaks under his breath, she laughs and, when Effi joins her, she passes on the message. Effi and Sasha join Zach with their full plates and, when Philip arrives, he’s sent back with instructions. Intercepting Charlotte on the way there, he relays them to her.

Once everyone has filled their tray, the five of them sit and wait for Zoe to arrive. As she makes her way over, they begin to giggle. Zach shushes them. Zoe takes her seat and greets her colleagues. They all say nothing, just grin.

The others laugh and look down at their plates until Zoe finally notices the shiny boiled eggs sitting on top of their salads, goulashes and baked potatoes. 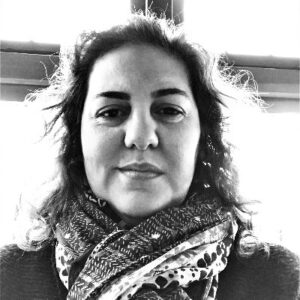 Michelle Christophorou won the Strands International Flash Fiction Competition in May 2020, and the Retreat West Fire-themed flash fiction competition in 2019, for which she received a ‘Best of the Net’ nomination. She was also runner up in Funny Pearls’ 2019 short story competition. Her fiction has appeared elsewhere in print and online, most recently in Blink-Ink and Fudoki Magazine. Her story ‘Wearing You’, published in Flash Flood, was named in TSS Publishing’s list of the 50 Best British and Irish Flash Fiction pieces for 2019/20. In a previous life, she practised law in the City of London. Tweets @MAChristophorou