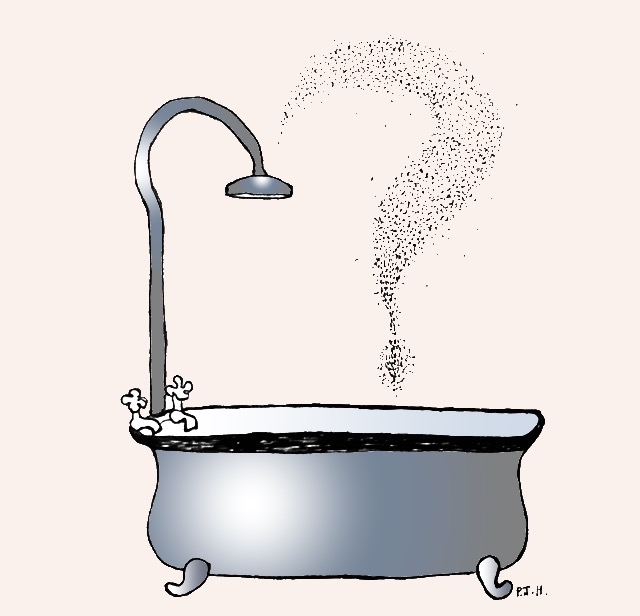 The ants invading the bathroom gave me no recourse but to put out borax and sugar traps. It was one thing when it was a lone black ant exploring the shower or the underside of the toilet, but it was another to have a thick column marching up the tub, up the wall, and spreading into the bathtub and showerhead.

So, I set out the traps. I imagined them, hundreds of small, helpless things, their organs betraying them, their very substance rupturing. To be clear, I’m usually the seat of mercy. When I squeegee my shower walls every night, I avoid the ants because I don’t want to squish their tiny ant selves. I feel very Buddhist when I do this, and saintly, and also practical, for avoiding smearing ant guts on the off-white and pink tile.

Now the traps are set, the bait oozing down the side of the tub. There is nothing to do but wait.

In bed, I think about the ants before I sleep. I dream about them, ants like the dots of an ellipsis threading together separate bodies into a line, a hanging thought. Ants as messengers, telling me – what?

In the morning, the alarm jolts me from my looping dream of ants crawling in waves, turning the walls black. Bleary, I stumble into the bathroom and flick on a light. Blink. Rub my eyes. Rub my eyes again.

It’s not a tsunami of ants, as in my dream. It is an unintelligible alphabet of ants. The insects march in perfect formation and, with their steady movements, draw oscillating hieroglyphs, symbols that might be in an alchemist’s book. On the wall in front of the toilet, they promenade in a triangle, point up, with an eye-shaped blob circumscribed in the middle. Over the sink, a trefoil pattern of ants covers one half of the mirror. But what draws my attention are the ants in the shower where, upon the Pepto-Bismol-pink and grayish tiles, they circumambulate in the shape of a human skull, complete with black staring eye sockets.

I jet out of the bathroom, slamming the door shut behind me.

First things first. I piss in the yard, even though it’s still dark out and friggin’ cold. Then, I call the only person who can help me: Cindy, new age guru, my touchstone, and my hairstylist.

‘Sasha?’ comes her groggy voice after the third ring.

I explain the situation and Cindy says she’ll be right there.

I’m expecting her to burn incense and chant some crap, but instead she snaps pictures with her iPhone and uploads them to Instagram.

‘There’s a contest today about omens and crop circles,’ Cindy tells me. ‘The winner gets two tickets to a cruise in the Bahamas.’

After getting no help from Cindy, I brush my teeth in the kitchen sink, keeping my bathroom door safely closed, and go to work. I’m not freaked out anymore, I just want the ants to go away and die before they spell out ‘REDRUM’.

Work is stupid, as usual. My boss fills my to-do list with the same repetitive tasks: emailing, filing, and looking busy. I take breaks to stare out the window or do crossword puzzles; my brother beats me at Words with Friends again, and I delete the app once and for all in a fit of sore loser-hood.

Even though it’s a sunny day, I can practically feel a rain cloud hovering over my car as I drive home. I want to shower, but I keep imagining ants pouring out of the faucet. Shudder. How long does it take before the damn things disappear?

I pull onto my street, annoyed that my suburban cul-de-sac is completely full of cars. There’s not a single freaking spot – and some jerk has parked in my driveway. First ant hieroglyphics, then my bajillionth defeat at Words with Enemies, and now this garbage? I double park and, leaving the engine idling, I slam the car door and think about some choice words to say to the perpetrator when I find him.

I turn around and someone sticks a microphone in my face.

The reporter is a slight woman with a nervous tic. She presses the microphone so close to my face that I can smell the too-many-people-have-breathed-on-this-microphone smell.

‘Did you park in my driveway?’ I demand, pointing at the van in my spot. Only now do I realize that it is a news van.

‘Sasha!’ comes a familiar voice. It’s Cindy, her hair up in tinfoil like she was in the middle of a hair dye job – or trying to communicate with aliens. With Cindy, you never know.

‘Isn’t it fantastic?’ Cindy blurts. ‘Your house is haunted by intergalactic beings!’

She explains it three or four times, but it still doesn’t make any sense until she switches off her new-age brain and communicates in Muggle. ‘You won the contest!’ Cindy gushes at last. At my blank stare, she rolls her eyes and adds, ‘Cruise, Sasha! C-R-U-I-S-E!’

‘Oh. Really?’ I ask. Dazed, I walk to my house, where more reporters are hovering like sharks at the scent of blood. Cindy claps her hands in delight. I open the door and let them all file in; they descend on the bathroom. I wonder if I’ve emptied the cat box, but now it’s too late. There is a collective gasp of dismay as Cindy opens the bathroom door. I bite my nails, kicking myself for not refreshing the cat litter, and creep forward.

But it’s not the soiled litter tray. There are dead ants all over the floor – in no particular arrangement – at least three inches deep. It’s like a black carpet with legs.

‘I still get the cruise tickets – right?’ I ask, feeling only slightly guilty.

A week later, sipping daiquiris poolside as the sun reflects off perfectly blue waves while Cindy reads some crap by Ram Dass in an Adirondack chair, I no longer feel even slightly guilty.

Rachel Rose Teferet is a copywriter by day and novelist by night. Her work has been published by Subprimal Poetry Art, The Tishman Review, Page & Spine, Black Rabbit Quarterly, Slink Chunk Press, Manawaker Podcast, Sierra College Literary Magazine as the winner of the 2016 Flash Fiction Contest, and more. Her play “The Necromancer’s Daughter” has been performed at Synthetic Unlimited in Nevada City, California.