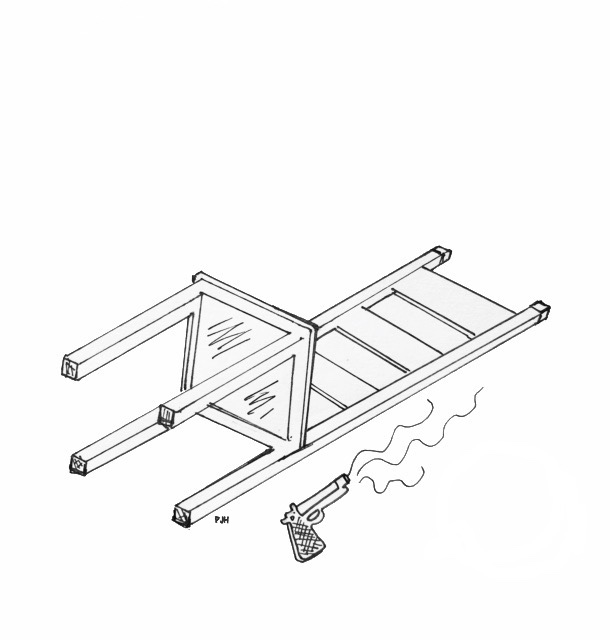 The firm provided an assortment of licensed trinkets to ‘remove obstacles’ or ‘eliminate pests’, but they still considered Sylvie herself to be the most dangerous weapon in her armoury. It was, therefore, unfortunate for her captors that they had selected her bête noir in their woefully ill-judged attempt to weaken her.

Sylvie conceded she felt mildly disappointed in the lack of originality on display, from the twenty-four seven strip lighting to the constantly looping Barney soundtrack. At intervals the small sliding hatch on the metal door of her cell would clank open and a pair of eyes would monitor her until the little door banged shut again. She revelled in performing for these brief interludes. Sometimes she would press herself into the corner, knees hunched to her chest and rock gently while mewling into the fabric of her jumpsuit. At other times, she’d pace wild circuits of her cell in a clockwise direction. Always clockwise: she believed on some level this should appear significant. If she felt particularly creative, she’d run at the door and scrabble at its metal surface with her nails.

When the show was over, she’d relax back onto the thin mattress on the floor and recommence meditation. She’d even succeeded in turning the most irksome facets of Barney into a mantra, an achievement she found particularly rewarding, and potentially lucrative if she could market it to despairing parents after she’d escaped.

However, beneath this veneer of calm, Sylvie knew it was brewing. She would need to use these sedative techniques judiciously lest she diminish the slowly building storm. The eruption, when it came, needed to be perfectly timed.

Her captors concluded that four continuous days and nights without sleep would sufficiently undermine her defences and, on that final evening, they sent two almost identical blocks of muscle to hoist her by the armpits and drag her, feet bip bip bipping along the concrete floor, to the interrogation room.

It was Party Time.

As she allowed her physical form to collapse onto the black plastic chair, her mind quickly absorbed her surroundings. The décor continued the minimalist-meets-Soviet school of interior design. Whoever this crowd were, the monochrome lino, plaster, concrete ceiling and utilitarian furniture bore testament to a deep love of gunmetal grey. Her adversary, watching from the opposite side of the table, maintained the dreary theme in his suit, hair and pallor. Even the gun ostentatiously wedged in the waistband of his supermarket trousers – did these morons never worry about blowing their nuts off? – was a flat unburnished grey.

No, the only item in the room even vaguely arousing her curiosity was the instrument trolley occupying the wall to her left. The chief cleared his throat.

Sylvie squeezed out a tear and tilted her head to facilitate its pathetic trickle down her cheek. The chief captor leaned across the table and stared at her.

‘How are we feeling now?’

We? Sylvie steadied herself against the wave of revulsion surging through her limp form. She had been trained to withstand pretty much any form of assault, but clichés still inspired a disproportionate level of irritation. With an effort she restrained herself. Now was not the time for sarcasm. Allowing her head to loll back, she let out a low whimper, and a hint of a pleasure breezed over her opponent’s face.

‘Have you been enjoying the Barney?’

‘Love… Barney,’ she whispered, following up with a small sob.

‘Perhaps you’d like some more?’ The chief nodded over to one of the muscle blocks who flipped a switch and jaunty squeaking filled the room. As one, the captors involuntarily gritted their teeth. Sylvie stared at her rope-bound hands and recited the Aberdeen nineteen eighty-three European cup-winning squad in her head to prevent the now familiar comfort of the purple mantra undermining her aggression.

The chief, who was turning an interesting colour, not dissimilar, in fact, to that of the prehistoric chanteur, stood up and stalked the room, coming to a stop behind her chair.

She felt obliged. After all, they liked their theatre. Her head was now clamped between the chief’s hands and twisted at such an unlikely angle that she could actually see Muscle Block One switching Barney off again.

‘Nrggh!’ She gave a, hopefully terrified, wriggle in the chair whilst making a mental note to mention this position to her chiropractor. Her neck hadn’t felt this good in years.

The chief released his grip, letting his hands slide over her breasts. Sylvie suppressed the urge to break both his wrists with her knees and cached it as future fuel. As he returned to his side of the table, she let her feet slither out from under the chair and flopped her head to the left. Across the room, she noted, some old friends glinted on the stainless-steel surface.

‘So, now would you care to share?’ The chief cocked his head to one side and gave a poor impression of an ingratiating smile. ‘Or do we need to offer you a little more… encouragement?’

At this well-rehearsed cue, Muscle Block One stomped over to untie her hands and pin her to her chair, whilst MB Two trundled the trolley of instruments to her side. The chief walked round to her side of the table to appraise the impressive display of surgical apparatus. She was completely surrounded.

MB Two reached for her left hand and slammed it onto the cold steel of the trolley. With his free hand, he picked up a pair of pliers. She stifled a laugh. Jesus, was there a manual? Sylvie let out a distracting sob and, stretching her fingers to their limit, nudged the assorted scalpels into position. The chief was leering at her fingers.

‘Such pretty nails too. It’s a real shame.’ He nodded to MB Two.

Four nights of no sleep. Four nights. She loved sleep. No-one, but no-one, disturbed her sleep. That blissful moment of abandon just as your consciousness slides from this world to beyond had been relentlessly devastated. Every time she’d started to doze off, they’d kick in the Barney, or some metallic clattering shite she’d never quite been able to place. For four fucking nights. They’d stolen every moment that promised zen-like peace with a physical jolt that had jarred every nerve ending in her body. Every. Single. Nerve. Ending. Ninety-six hours of resentment pressed deep into her marrow surged to the surface, to her muscles, to her skin. Her eyes and the corners of her mouth twitched. Rage coloured her face and shook every fibre of her body. Four nights. Four nights. Four nights.

MB Two moved the pliers towards her thumb and her self-control ripped apart.

Her left arm lifted inches from the steel surface then powered down as her left foot kicked the distant underside of the trolley base, catapulting the carefully positioned instruments in a perfect arc into the face of MB Two. At the same time, she braced her right foot on the floor and thrust her chair back into MB One. She only had time to register the look of astonishment on his overgrown face before her forehead neatly split his nose in half. She was out the chair now. The chief took an involuntary step back, his hands instinctively raised, giving her free passage to liberate the lacklustre firearm from his waistband. She spun round, neatly booting the side of his skull in passing, and dispatched both incapacitated muscle blocks with a clean shot to the forehead.

The chief was lying on his side, blood and spit dribbling on the floor from his bruised face. With a foot, Sylvie rolled him onto his back and stood at his side. She kicked his legs apart and rested her heel on his stomach.

‘This one’s for groping the twins. That, my friend, was just impolite.’ She fired a dead-eye shot between his legs. The chief jack-knifed on the floor. Sylvie knelt down, rested the gun barrel on his temple and leaned her face into his contorted features. ‘Never, I repeat NEVER interfere with my sleep, motherfucker.’