I’m a lesbian, and yes, it is the most interesting thing about me.

But sometimes I feel that I want to share other parts of my personality with the world, such as my love of Rafael Nadal’s left bicep, my obsession with goats and my utter contempt for people who don’t indicate.

For the past eight years I’ve only written about being a lesbian – from lesbian bars that are crowded with sofas (because we lesbians love a good sit down), to the discounts we get in B&Q. Even our smugness at knowing we’ll never accidentally become pregnant. I’ve written it all.

But recently I got to thinking: is everything I write about being a lesbian? Do readers think, “Jesus, we bloody get it, you’re a lesbian. Do you have anything else to offer?”

Do I have anything else to offer? God, I bloody hope so…

Here are some other things that I could offer people:

So really, if you look at that list you can see that I’m actually doing a disservice by writing only about being a lesbian. I’m more than a lesbian. I’m also a fat, depressed woman who screams internally with excitement when she sees a goat.

I love famous gays like Sandi Toksvig, Abby Wambach, Martina Nav-me-love-some-pavlova, Sue Perkins and Brandi Carlile because of the things they do and create. Sure, some are also on that list because I want to have sex with them, but I’m trying to explain that I don’t just love someone because they’re gay.

But, hello, who is this? Ahh, it’s the questioning side of my brain that says, ‘Suuuuuuure, it’s all well and good trying to be more than just a doughnut bumper, but what about those of your readers who like you just for your lesbian content? Will they still love you if you start writing about how your guinea pigs poo in their food bowl?’

Well, I guess they say write what you know, so, while I know things like why lesbians wear men’s clothes (to stop men objectifying our gorgeous bodies) and why they have short hair (because obviously we all just want to be men), I also know about guinea pig ownership, crippling depression and the limbs of the greatest ever male tennis player, Lord Rafael Nadal.

So, it’s time to broaden the topics that I write about and hope that the fact that the words being written are coming out of a lesbian’s brain will be enough to keep my fellow lesbians interested.

If not, then maybe I’ll just start putting up sexy nudes on my Instagram. 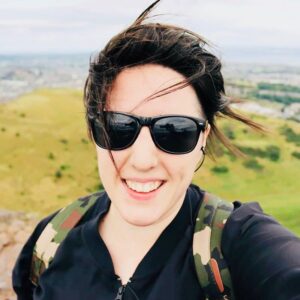 Jenna is a writer of sketches, essays and books, specialising in travel, depression and lesbian culture. Originally from London she now lives in Edinburgh with her partner and two furry little guinea pigs who eat their own poo.