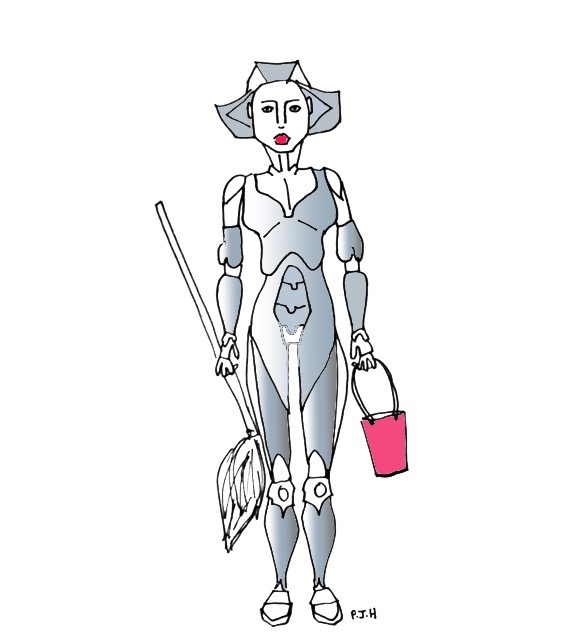 This is my LAST WILL AND TESTAMENT. I leave all my money to my Personal Robot, s/he/it who has taken care of me these past months in the care-home-hospital. When no human had time, nor care homes the funding for salaries to lure humans who don’t want “personal care” careers, only Robot assisted me. When no persons are available, impersonal robots fill a gap. In that gap you get food delivered, buzzers answered, window blinds adjusted – services you’re grateful for.

So, I acknowledge my debt to Robot. S/he/it dispensed the pills which were meant to dull my physical pain – and mental acuity – but which did neither because I fooled Robot by not consuming them. (Artificial Intelligence is not as intelligent as it thinks it is.) Algorithms do not read subtle signals, nor read the unconscious. You can make it think that you “chose” something once or twice, and then A.I. believes you, guiding you to future “choices” so that you keep doing the predictable manageable thing, which you evade by un-manageably only pretending to follow instructions, if you follow me. (If you can’t, don’t feel bad, Robot didn’t either, and s/he/it is supposed to be the ultimate in intelligence.)

Anyway, thank you Robot, for all that window blind adjusting and such. Here’s your reward: a few thousand dollars for your future upkeep. Don’t let anyone challenge this written will, because if you are real enough to be a personal carer for old folks washed up in care homes without human carers, then you are real enough to benefit from a legal document. You’re real enough to receive a bequest. Treat yourself to some new algorithms or something. And buy a treat for your Artificial Robo-Cat too, that fake-fur thing which you keep putting on my bed. Get him a robotic mouse to torment.

When I heard a real mouse screaming in pain outside my window because the care home had put poisoned traps in the garden, the doctor (more successfully robotic than Robot ever is) said I must have imagined it. He therefore gave me some over-imagination pills, plus the Robo-Cat, so that I could be soothed by artificial purring on my bed during naps – which I’m urged to take more often than would be humanly possible.

The purring sounded like the air-conditioner, but it wasn’t the air-conditioner because that had broken down. Hence the open window letting the mouse screams in. When I explained that to Doctor Robot-Clone, he wrote “over-excitable” on my file. I could see the words, although he assumed I couldn’t because I’m supposed to be half-blind. I see a lot by pretending to be half-blind. The medical staff believed me when I said I was, because they don’t do wasteful eye tests on the elderly – and they’ll believe anything. Fake blindness is the best cover ever, if the willfully blind are your target group.

So now Robot brings me Robo-Cat every day and I pretend I don’t see Robot pretending to adjust the non-existent air conditioner which she has been programmed to pretend-adjust by the humans, like human nurses have been programmed to say cheerful things when they breeze by us patients on their way to daily meetings about demanding better working conditions.

Whenever I say something ever-so-slightly sarcastic like that, Dr. Robot-Clone writes “personality disorder” on my file, which I read while pretending to gaze unseeingly and (for good measure) dementedly over his shoulder.

At least Robot tries to do a good job, at least Robot is genuine, in its own programmed way, and honest in its artificiality. For that I’m rewarding Robot with an inheritance. I bet some lawyer who makes a career of protecting robot rights (surely by now there’s a course in that in law schools?) will defend my will in Robot Rights Court.

The only problem is that I won’t get to watch the show because I’ll be dead. Unless I only pretend to die. I’m sure there’s a way. The people who run the care home would be happy to see me dead, and people, I find, see what they want to see without necessarily grasping what is. So we’ll see. I bet I’ll find a way half-blindedly to blunder into Artificial Death. But don’t worry, You-To-Whom-It-May-Be-Of-Concern, this is still going to remain my Legal Will, notwithstanding, heretofore and thereunto-whatever … even if it’s ex nihilo and non inter vivos. You got that?

Flora Jardine writes plays, fiction and non-fiction from the west coast of Canada, and has published recent stories in literary magazines in Canada, the UK and the US.