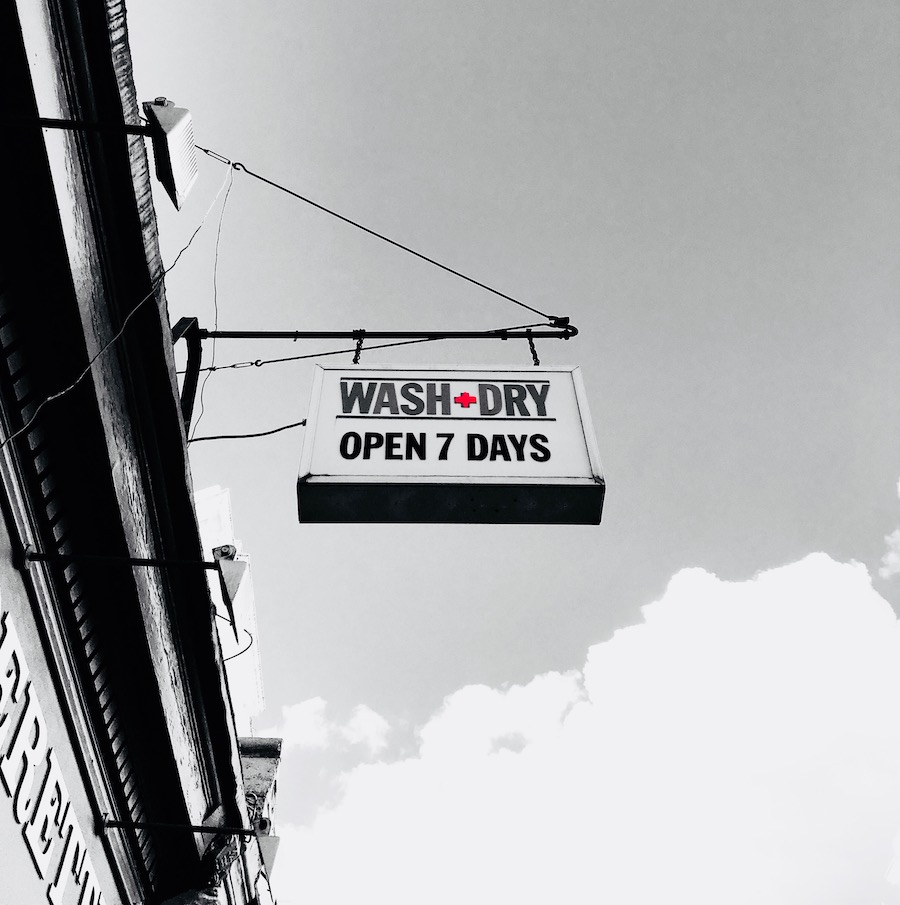 The wonky neon sign at the local Wash and Dry Laundry blinked off and on, flashing out Wash and Dy. Charisa was happy to oblige. Her head throbbed from staying up late gaming at her computer and drinking stale beer. Gone were the days of Chardonnay. This recession was killing her – and her chances of a career. Her student debt was piling up like the multiplying rolling numbers of a state lottery. She cast her eyes from the fuzzy TV of daytime talk shows to the tumbling dryer/dyer.

She was down to her last pair of clean underwear. All her bras were dirty. She’d had to put on a pair of her least dirty leggings and a bra-slash-yoga top. She looked like a hungover marathoner.

In fact, she did a lunge in the reflective glare of the machine’s porthole window, trying to see if the tights showed her panty line. At that moment, she noticed over her shoulder a gym-buff hottie. He, too, was in workout gear. Charisa almost toppled over.

‘Hey.’ He got her attention. ‘How long is the dry around here?’

While Charisa had no idea, she was eager to engage with this handsome stranger. ‘Hi! About 20 minutes. She guessed. He introduced himself as ‘Jake’.

She learned he was into CrossFit, the word similar to crossbow, the muscles straining to pull back, bulging, and then releasing. He talked about kettlebells and she nodded, imagining filling her kettle and setting it on the stovetop. Yeah, it got a little heavy. There were ‘medicine balls’, maybe a euphemism for pills? ‘Crunches’ are what she did every night in front of her screen with a bag of chips. ‘Burpees’ – how she felt after a long night of drinking – and ‘deadman lifts’.

‘Same,’ she responded aloud, thinking waking up is hard to do.

Jake was also into nutrition, specifically the Paleo diet, which, again, she assumed was like what cavemen ate. With his chest hairs peeking out of his low-cut T, she easily imagined playing cavewoman to him, making out on a bear-skin rug.

They chatted throughout his entire spin cycle and while she folded, secretly hiding any stained items inside the fitted sheets. By the end of the hour, they’d texted each other their numbers.

Two kids and twenty pounds later, they’re still together. Charisa continues to muse over the randomness of meeting at a laundromat and of Jake, construing she was into exercise. If she hadn’t been hungover, dying – sorry – drying, and down to wearing her last clean clothes – seldom-used performance wear – they might not have met. But they did, and, more than a lifestyle change, they worked out.

Jane Hertenstein is the author of over 90 published stories. In addition she has published a YA novel, Beyond Paradise and a non-fiction project, Orphan Girl: The Memoir of a Chicago Bag Lady, which garnered national reviews. Jane is the recipient of a grant from the Illinois Arts Council. Her latest book is Cloud of Witnesses from Golden Alley Press. She teaches a workshop on Flash Memoir and can be found blogging at memoirouswrite.blogspot.com/