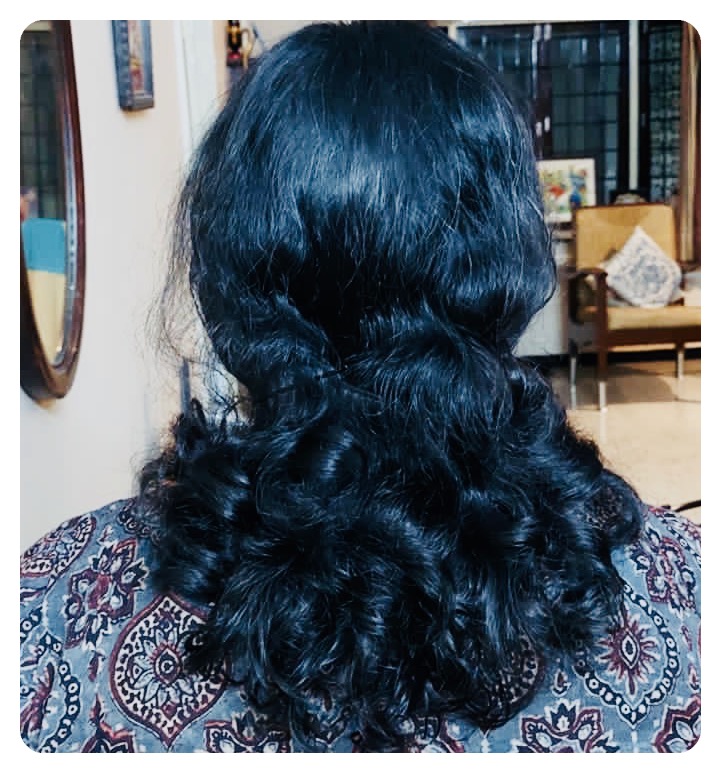 Somewhere in the periphery of my vision, something glinted. Said vision was focused on my mirror-image, so when a filament of indeterminate nature caught the light, I couldn’t tell whether it was the cobweb in the corner or a silver strand in my hair – and which was worse.

My hair is everywhere! I have fifteen months of uncut hair and, even if it’s only just past my shoulders at present, it’s a lot. It’s in the shower drain, on my dressing table, gliding around the room in loose twists and swirls, tangled up in dust bunnies and twined around my vintage Goody beaded rubber bands (beloved childhood possessions which I passed on to my nieces and shame-facedly reclaimed a few months ago). Errant strands flutter about my face and inside my clothes, making me wonder if some infinitesimal insect is exploring those spots. I make a grab for it, only to find I’m slapping myself. It’s also in my food, turning up in batter, holding my dosas together so that, when I tear off a piece, keratin and fibre are indistinguishable unless held to the light. That figures. After all, isn’t it all the spinach and other leafy vegetables I so assiduously ate that are keeping me in hair now?

Even the most conservative aunt says it’s high time I cut that hair; it’s growing wild. But after some thirty years of being shorn and sheared, not having a salon to visit for fear of the virus is liberating.

I’ve often wondered what circumstances would force me to grow my hair. Other than illness, or being marooned in some place without a salon, I couldn’t think of any. How curious that the two came together! But the illness is not mine – touch wood – and even when we are between lockdowns, things have gone too far for me to revert to type. I’ve let my hair down, and though every day is a bad hair day – combing it, tying it up, pinning it in four or five places, washing it – it will be a while before I give up. After all, wasn’t I that awkward teenager who chopped off her waist-length hair, and then, overcome by the enormity of that act, emptied a bottle of special growth oil over her head?

My lockdown locks will be a test for the stylists. All along, they’ve said my hair is too short to cut differently. Just grazing my shoulders at its previous longest, that wasn’t enough for them: “Grow it more. When it’s longer, its weight will support the changes we make and keep it in place,” said one person when I sought a low-maintenance, chemical-free hairstyle that would also present a solution for flyaway hair.

I’ve tried to grow my hair, I really have. I’ve gone through cycles of keeping it away from my face with a band, getting my eyes poked with it, having it lodge itself in my glasses, sweating it out and feeling its clammy tentacles clump and cling unflatteringly to various parts of my face, even trimming it during full moon days because someone said that would promote quick growth. The working life and the never-ending summer always won over my resolve. Within a couple of months, I’d be feeling light and happy as the scissors clipped away, creating a carpet of downy black beneath the chair, stylist and I marvelling that such a small snip could produce such a big harvest.

My hair is now just long enough to be in a “pony”, as it is referred to in contemporary Indian. It bobs up and down. I cannot pass for a teenager, but it makes me feel youthful. A rubber band goes around it several times before the band is secure. All those years ago, I cut my hair because it was thinning and my plaits looked skimpy. Above-mentioned nutrition notwithstanding, I doubt that the fullness it had as a child will be restored in middle age. All the hair that I encounter around the house and on my dining table confirms my suspicions. I don’t doubt for one minute that my hair fell out earlier in my life, it’s just that it was too short to be so visible. But I shall soldier on, lockdowns and unlockings notwithstanding. One day, several months later, when the world outside finally feels safe, I may, I just may, find a hairstylist who can give this hairy tale a happy ending.

Sravanthi Challapalli is a writer, editor and journalist based in India. She has been published in The Hindu Business Line where she worked for many years, The Hindu, The Telegraph, as well as Bengaluru Review. She is trying to keep her 14-year-old blog, When My Soup Came Alive, alive.