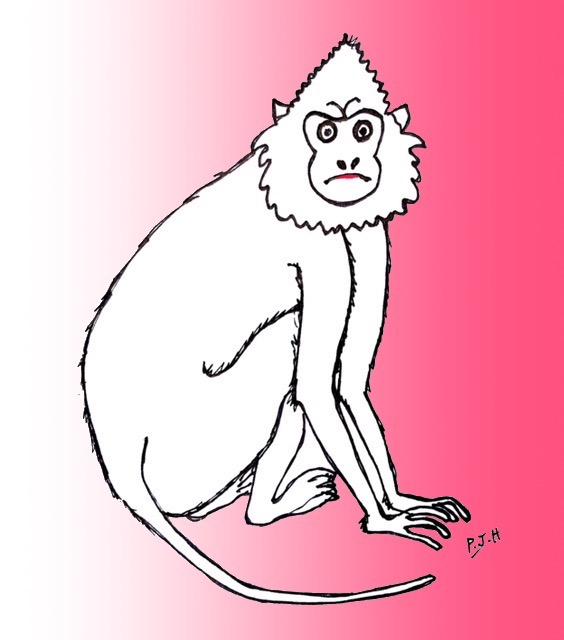 War has broken out between me and the teenage langur monkey. We’ve progressed into the stereotypical betel-nut-chewing-Bollywood-villain phase in each other’s story – all dramatic barks and no bite. If he manages to squeeze himself through the box window’s moderately spaced iron security bars, I’ll have to outsmart him whilst screaming my lungs out.

I give him my best angry face and pray it keeps him at bay, but it is probably the stick that’s doing it. Okay, the stick is termite-eaten and a single hit could cause it to fall apart in dust and splinters, but he doesn’t know that. He bares his teeth at me, his scowl devoid of menacing growls or threatening snarls. Perhaps he is only grinning at my stupidity, taunting me until he delivers his winning blow and swings to the neighbour’s window while I stand defeated.

Our dispute concerns a jar of pickles sitting in the corner of the ledge on the inside of the window. He wants it, and I won’t let him have it. It’s the last jar of mango pickle my didai ever made.

I’ve always loved her pickles. Didai used to boast that her lime pickle was the first thing that titillated my taste buds after my mother’s milk. The neighbours gasped in horror and my paediatrician might’ve dropped unconscious had she known, but Didai admitted to feeling rather intrepid at the time. She even chided my hysterical mother, saying, ‘I mothered you and your four sisters, and you all stand here fit and fine! Don’t you lecture me, Puti!’

From overseeing the netting for koi fish (not the Japanese koi but the climbing perch fish), and the occasional catla fish in the family lake, to milking the cows in the shed, I tailed Didai everywhere she went. Being the youngest of her grandchildren and the only girl amongst them, I was her pampered ‘chhotto chander tukro’ or ‘little piece of the moon’. She regaled me with stories of witches and bramhadaityas, princesses and dacoits, devatas and asuras, elephants and great big snakes. I often imagined what it would be like to stay with her all year, and not just during the summer and durga puja vacations. Every time we said ‘goodbye’, she sent us home with a steel can of homemade syrupy sweet rosogolla dumplings and a jar of pickle.

Pickle, or as we call it, achar: sliced and sun-dried mangoes, limes or chillies, immersed in mustard oil and spices and sun-baked for six weeks in a glass jar covered with muslin cloth. A lot spicy, a lot tangy, and a little bit sweet. I used to scoop out a spoonful and make it a mandatory relish to my rice-based lunch and to my parathas or rotis at dinner. I zealously believed that if I managed to finish the jar before I returned to visit Didai, I’d get a fresh jar of pickle. It took me longer than it should have to realize that I’d get one anyway.

At this stage, I begin to wonder whether I should consider sharing the pickle with the langur, but the jar is supposed to sit in the sun for another three weeks. He looks at me with his big brown eyes and scratches his furry grey butt with his tiny humanoid hands. I once asked Didai why langurs have furless black feet, hands, faces, and ears. ‘Because they got burnt when Lord Hanuman set fire to Lanka in order to rescue Sita Ma from Raavan,’ she said. ‘So, why do they still have grey fur everywhere else?’ I retorted. She made a serious face and replied, ‘I don’t know, my own didai never told me that story. But they don’t have fur everywhere else. Heheh!’

The langur bares his teeth again. Would it kill him to ask politely for a wee bit of pickle, albeit half-done? But no, he wants the entire jar because that’s just how langurs roll. He’s rude and I’m selfish, so I hatch a plan: All I have to do is get a potato from the pantry and toss it to the other side of the window ledge. When he moves to reach for it, I’ll grab the pickle jar like a ninja-cat-burglar and make a run for it. Simple. Elegant. Flawless.

Lured by the potato, he reaches for it, accidentally knocking over the pickle jar with his foot. The jar, having grown as old and frail as Didai during her last days, smashes into bits, releasing the strong and distinct scents of mustard oil, spices, and dried mango.

The two of us, human and pre-human, stare at the spiced oil as it spreads, dripping down the edge of the window, while the premature mango slices sit in the shattered glass ruins, and the white muslin cloth soaks up whatever oil it can get like a hungry humpback. A truck blares its musical horns at a distance, heralding the end of the battle.

At least we both lost the fight. Well, me a little more than him, given that he earned a potato out of it – the spoils of war.

I want to cry, like the time I hugged Didai and cried when I found myself torn between pretty girls and my huggable hair-gel-enthusiast boyfriend. But I suppress my tears, because I know what Didai would say. ‘Ah, you’re better off with girls – boys are overrated anyway,’ she had said then. ‘Ah never mind, my pickles are overrated anyway,’ is what she’d say now.

Tejaswinee Roychowdhury is a writer from West Bengal, India. She is also a lawyer having post-graduated from the University of Calcutta. Her work is published in Kitaab, White Enso, Indian Periodical, and elsewhere including in an international episodic anthology by Sweetycat Press. She tweets at @TejaswineeRC.