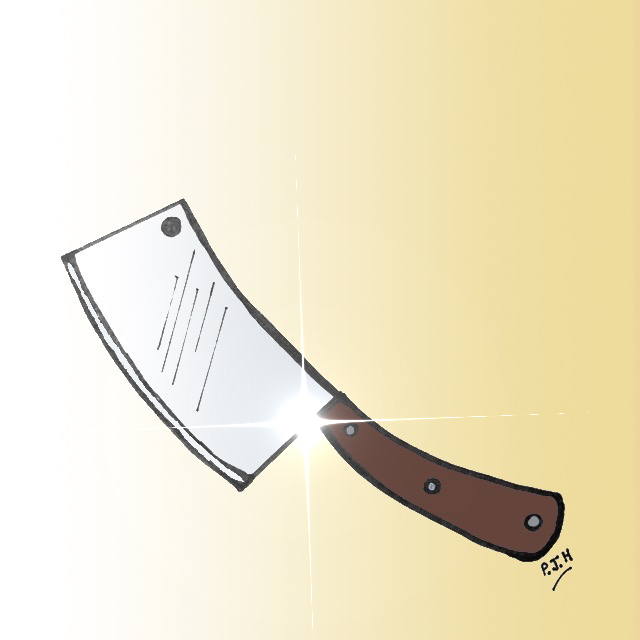 My mother ran into the kitchen to grab a Ginsu knife when Marcus rang the doorbell.

‘Please don’t do the Sheren,’ I begged, running after her.

‘He’s going to be a doctor soon, God willing,’ she said.

It had been a week since I returned home from the University of Pennsylvania for the winter holidays, and Mom had never missed an opportunity to call my attention to how much of a mensch my boyfriend Marcus was – good grades, excellent family pedigree (his father was a physician), and always polite (he never turned down a second helping of her cooking). I had dutifully nodded at all his positive traits because I didn’t want to disappoint her, but the thought of marrying him made me feel like I was suffocating.

‘Fred,’ Mom yelled at Dad who was in the living room watching a recording of last year’s Phillies game. ‘Answer the door but keep him in the foyer. Got it?’

Dad paused the TV and mumbled an affirmative.

Mom opened the silverware drawer and scrutinized the empty knife compartment. On a hunch she’d try something like this, I’d hidden the Ginsu set under my sweaters that afternoon.

‘I’m highly skeptical of marriage as an institution,’ I explained, hoping she’d take the hint.

‘You don’t know what you want. One minute you’re an English major, then a Sociology major, and now an Art History major. Debbie, we don’t turn down stability.’

Dad was spouting off Phillies stats loudly in the foyer.

‘See what you’re doing to your father?’ Mom asked as she headed toward the refrigerator. ‘Small talk makes him nervous.’ She squatted down, reached under the fridge, and pulled out a rusty cleaver.

‘Watch your mouth. Just in case someone breaks in while your father’s at the office.’

‘What if Marcus sees you with that thing?’

‘I’ll hide it behind my back.’

Dad rushed into the kitchen. ‘Ruth, what’s the hold-up? It’s getting awkward out there. The boy still has no clue about baseball.’

‘Debbie says she doesn’t want to get married.’ Mom strode off to the living room, cleaver by her side.

He patted me on the arm. ‘Best do what your mother says.’

‘Do you really believe the Sheren works?’ I asked him.

When we joined her in the living room, Mom signaled me to enter the foyer.

‘What took you so long?’ Marcus asked, snow melting off his hat and coat. He leaned in to give me a timid kiss.

‘Mom and I were having a conversation.’ I held my hands out for his winter things and hung them up on the coat rack.

‘Your dad doesn’t like me,’ he said. ‘He quizzes me about baseball even though I don’t have a head for numbers.’

‘Don’t take it personally. He’s just obsessed with the Phillies. He really believes that if he hadn’t injured his shoulder in college he would’ve made the majors.’

I ushered Marcus into the living room. Dad, sitting on the loveseat, waved at him manically so that he wouldn’t notice Mom creeping up behind us.

When I was a child, Mom had regaled me with stories about the magical powers women in her family possessed. Back in Ukraine, my great grandmother Golda could predict when the Cossacks would attack the village, giving the family enough time to hide in the cellar. My Bubbie Esther could kill a chicken for supper just by pointing her finger at it. In this country, Mom once willed a woman who was flirting with Dad to trip and fall into a puddle. But the biggest tale was how they all could perform the Sheren, and someday I would too for my own daughters.

I turned to watch Mom raise the cleaver over her head with both hands. The bare bulb in the foyer lit up her curly red hair like a riot of fire. With the tip of the cleaver, she tapped the top left corner of the doorframe and cut the air across to the bottom right. As she went to repeat the action on the other side, Marcus followed my gaze. He attempted to speak, but all that came out was a tiny squeak.

‘You weren’t supposed to see me,’ Mom said, cleaver still in midair.

Marcus’ face turned pale, and he began to hyperventilate.

‘Get a paper bag,’ I yelled at Mom and guided Marcus to the couch.

She reluctantly dropped the cleaver and returned with the bag. I handed it to Marcus and stared at her. She shrugged and sat next to Dad.

‘Why don’t you explain it to him?’ I asked her once he’d calmed down.

‘Fine. This goes way back on my mother’s side of the family. When a man whom the mother wants her daughter to marry crosses the threshold, the mother performs the Sheren to symbolically cut the ties he has to his own family, so that he’ll propose. There. I said it. You happy now?’ She glared at me.

‘You’re trying to force me to marry Debbie?’ Marcus sputtered.

‘Did they do this to you?’ he asked Dad.

‘Actually,’ Dad said, ‘I saw her mother come up behind me with a carving knife, but I figured I could take her.’

‘Why didn’t you tell me?’ Mom brushed his hand off her knee.

‘Your father explained everything later. He said you’d put her up to it. He swore me to secrecy. I was flattered. You had that cute little figure. Smart too. It was time I settled down. Marcus, take it from me, girls will be slim pickings once you graduate from college.’

‘Our marriage… a foundation of lies,’ Mom said.

‘One tiny fib. How’s that a foundation?’ Dad asked.

A cumbersome silence settled between them. Although I frequently wondered about Mom’s claim to have inherited magical powers and passed them on to me, I never once considered that my parents hadn’t fallen in love at first sight.

‘It was because of Eric.’ Mom stared at Marcus.

‘Excuse me, Mrs. Schwartz, but my name’s Marcus,’ he said.

‘The pitcher who replaced me?’ Dad asked. ‘What’s he got to do with anything?’

‘Not that kind of player.’

A look of understanding and then betrayal flickered through Dad’s eyes.

‘Before me and you,’ she said. ‘That’s why Mamma insisted.’

‘But Debbie was born premature.’

She shook her head. ‘All the things I could have done if it weren’t for decorum.’

I’d assumed Mom never mentioned what life was like before Dad because there was nothing of importance to tell. Dad, who sat there dejected, suddenly morphed into a stranger.

I started to hyperventilate.

‘Take this.’ Marcus grabbed the paper bag off the floor and held it to my lips.

In the swirl of tears and strained breaths, I felt Marcus’ right leg bounce up and down next to mine. He cleared his throat.

‘Wow, this Sheren thing really works. On my way over here, I was considering whether I should propose to Debbie, and now, well, it seems like the best idea I’ve ever had.’ He grabbed my hand. ‘Doesn’t that make you happy?’ he asked me.

They all stared at me with anticipation.

Family magic is the biggest con job there is, I thought to myself, and I took the bag away from my mouth.

During the day, Sascha teaches cultural anthropology and directs the Office of Community-Based Learning at Washington and Lee University, and she also spends time with her two sons, her partner, and their two dogs. She writes fiction at night while everyone’s asleep. She recently obtained her MFA from Pacific University. Her stories have been published in The Write Launch, Kitchen Sink Magazine, and Bright Flash Literary Review.