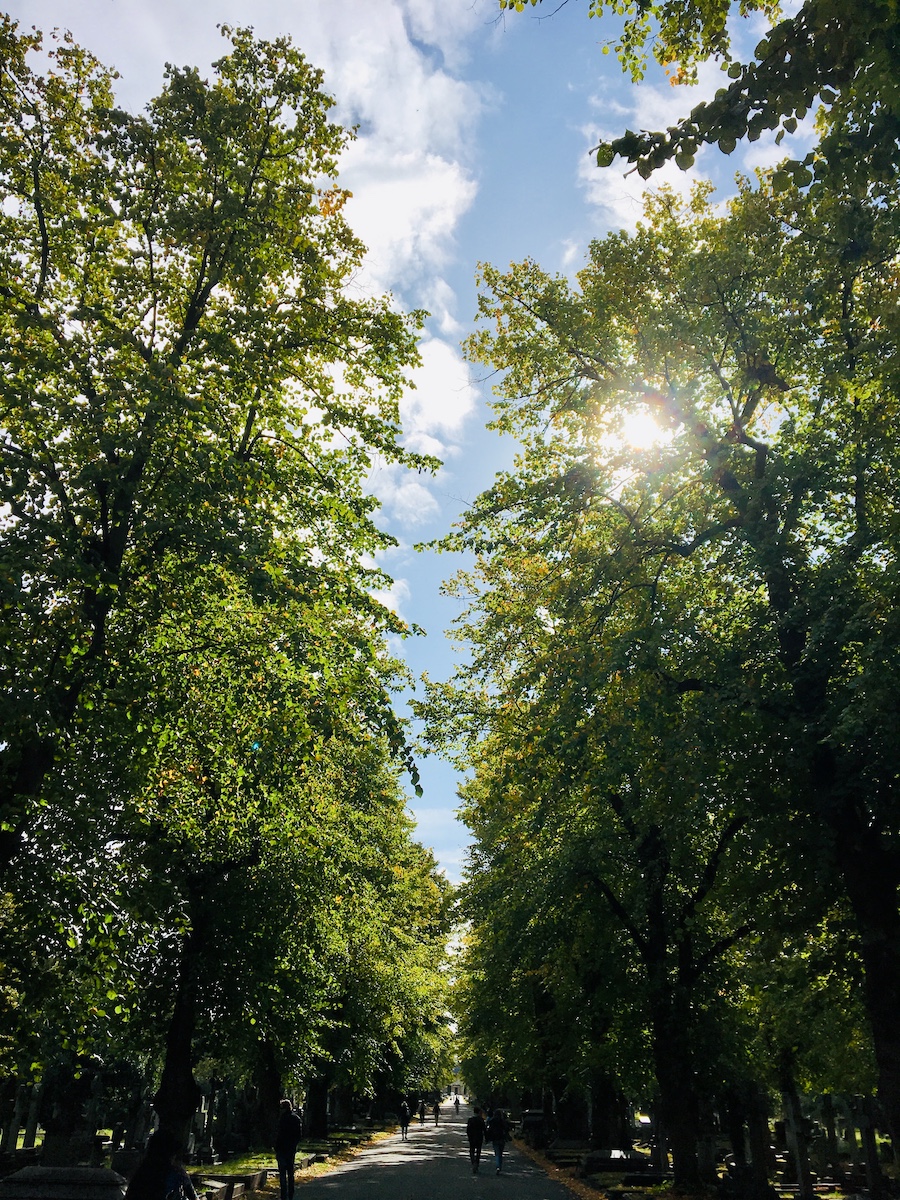 The National Trust car park has plenty of spaces. Dave and his family are early. They are always early. Dave is worried he has told the other two families the wrong car park. Dave is a worrier. Dave’s surname is Bravery, which is unfortunate.

The other two families arrive, so Dave has not told them the wrong car park. Dave knows he needs to stop worrying. You die if you worry and you die if you don’t, Dave’s mum used to say. Dave’s mum is dead now, so she should know.

The Nixons, the Grants and the Braverys are going on a walk. They have not seen each other, in person, since before dinner parties and playdates became illegal. Dave has planned the walk. It is a new walk and Dave has a map. Dave’s friends are making fun of him.

Dave is going to tell us where to go, says Zane Grant.

Dave will get us lost, says Kev Nixon.

Zane is still irked about the last time the Grants and the Braverys went on a walk together. That was a long time ago, before Alfie Bravery was born. Dave had decided it would be a good idea to walk up a big hill. Zane and Sally’s son, Finn, was too big to be carried but too little to walk up a big hill. But Sally Grant really, really wanted to walk up the big hill because Sally had been stuck at home with little Finn for a very long time. So, Zane stayed at the bottom of the hill, with little Finn, who sat in his buggy and cried for two hours straight. Zane blamed Dave. Dave blamed Sally. Nobody is sure whose fault it was.

Ten years on, all the children can walk by themselves. They are big boys and girls. The mums miss holding their hands, but they do not miss having to walk very slowly and stop every few seconds to look at another leaf. Mel Nixon is mum to twins, Hattie and William. Hattie and William are eleven years old. Hattie and William are always up to mischief. Today, Hattie is bending William’s fingers backwards until he screams. Kev says Mel is spoiling them rotten. Mel smiles a big, bright smile and says she has simply given up trying to get them to do as they are told, which is different.

The families chat as they put on their walking boots. It was a long drive and the traffic was bad. The Grants missed the turn off. The Nixons got flashed. Alfie says he has forgotten to bring his walking boots. He will have to wear his wellingtons. Dave picks Alfie up in a fireman’s lift, which makes everyone laugh because Alfie is nearly nine and big-boned and now his face is red, like the wellies. Dave laughs the loudest, even though he told Alfie to put his walking boots in the car at least three bloody times.

They start on a very big hill. Claire Bravery and Mel Nixon chat about working from home and home-schooling and tell each other how well they are doing. Sally Grant stays quiet. When there is a lull in conversation the mums call out to their kids.

Don’t get too close to the others, Ida, says Sally to Finn’s little sister.

The children ignore them.

When they get to the top, Dave is out of breath. He bends to rest his hands on his knees. Dave tells his friends he’s in poor shape, now that he’s at home all day with nothing to do. Something will turn up old chap, says Zane and pats Dave on the back, even though they are not supposed to touch each other.

The waterfall at the top of the hill is stunning. The families take photos and videos. Hattie is sulking because she has mud on her white jeans.

These are my favourites! she wails.

I told you not to wear the damn things, says Mel but Hattie can’t hear her because the waterfall is very noisy. Mel wonders what it would be like to wade through the water and stand underneath the waterfall in all her clothes.

The families keep walking. After twenty minutes Dave realises they have taken a wrong turn. Dave is peeved that Kev and Zane were right about his navigation skills, but he does not want his friends to know that. Instead of getting cross, Dave makes fun of Alfie and the way he walks in his wellies. Alfie ignores him. He is glad he wore wellies because it is very muddy.

Back on track, the families come to a hamlet. They walk through the hamlet and past a farm. The door to the farmer’s cottage is open and out runs a dog. Ida loves dogs. The dog loves Ida. It follows her over a stile into the next field.

The children are getting tired.

Don’t say that when there are people in the world who really are starving, says Sally.

People are starving round the corner from where we live, says Claire.

The families throw down blankets. They sit and unpack their picnics. Sally has remembered to bring hand sanitizer. Everyone agrees that Sally is very organised.

Mel has a brain like a sieve, says Kev.

You pack the sodding bag next time then, Kev, says Mel. Mel does not care that everyone can hear.

The families eat their lunches. The sun has gone in and it is starting to rain. Hattie and Ida huddle together with the farmer’s dog. Somewhere between the car park and the farm, they have forgotten about government social distancing guidelines. No one can remember if they are allowed to share food either. They think it is probably okay if it came from a reputable shop and the grown-ups agree that Waitrose All Butter Flapjack Bites are just the thing to keep everyone going.

Alfie has finished his lunch and is standing on his own, kicking a rock. Since he stopped going to school, Alfie wakes up in the night, so he is very tired and grumpy. So are Dave and Claire. Dave and Claire haven’t had sex in six months. Dave thinks they need relationship therapy. Claire thinks they just need to be away from Alfie for more than a few minutes at a time.

The couples talk about what they’ve been binge-watching. Sally Grant laughs at one of Kev Nixon’s jokes. Kev tries not to look too pleased with himself. Global events have put Kev and Sally’s affair on pause and clandestine Skype calls are not quite the same.

The children are getting restless. Hattie and Ida have stopped petting the dog. They have put on their face coverings and are playing a game of Am I Smiling Or Am I Not Smiling? Everyone laughs. Except for William and Finn. William and Finn are arguing about Minecraft. Last night, William put lava in Finn’s nether fortress and Finn is having a hard time forgiving him. Vengeance will be mine, yells Finn. The mums and dads all agree that Minecraft is very educational, though none of them are sure how, exactly.

The families set off again. Dave leads the way and everyone follows. They have walked through three more fields before they notice that the farmer’s dog is still following. Dave is worried that the farmer’s dog will get lost. Claire checks its collar and calls the phone number on the dog’s ID tag. Dave and Claire turn back, with the dog, towards the farm, leaving Alfie with the other families.

How much longer? My wellies are rubbing, cries Alfie.

Nobody is sure how much longer because Dave has gone off with the map. They follow the sign saying public footpath and push on up the next big hill.

Mel is telling Sally about her new job. She has only met her colleagues online so far, but they’ve invited her to attend a fundraising event. Mel is not sure how many people will be there but thinks it will be alright to go if it’s for charity. Mel asks Sally how she is. Sally was staying at home long before it became compulsory. She calls herself a ‘full time mum’, which annoys Mel, but they are friends all the same.

Sally tells Mel she is fine. Did she mention Finn has been hitting himself in the face with the Xbox controller? Oh, and Ida has pulled out all her eyelashes. Sally starts to cry and Mel is not allowed to hug her.

While Kev tries to break up the fight, Zane walks towards the cows. Zane waves his arms and makes a funny noise. He tells the children the worst thing you can do is run. The cows start to move. The children start to run.

Once they are safely at the other end of the field, they stop. Claire and Dave are catching up with them. Claire looks worried. Dave looks the colour of a dry-stone wall.

Wait for us, pants Dave.

Dave does not feel well. It was a long walk back to the farm. Alfie runs towards his dad and Dave stumbles. Dave lowers himself to the ground. He is sweating. Dave waves the map. Claire snatches it from him. They are still twenty minutes from the car park.

Alfie sits behind Claire, playing with his Lego. He doesn’t notice when Dave appears on screen. Dave has dialled in from his hospital bed. Claire hasn’t seen him since yesterday, when the farmer turned up on his quad bike and drove Dave to the nearest A&E. The doctor tells Dave it was a panic attack, but they are keeping him in for further assessment.

Isn’t Dave lucky it’s all in his head? says Claire.

Zane and Kev give a thumbs up.

Dave tries to get Alfie’s attention.

Son, mouths Dave, waving, leaning in towards the camera. Son!

You’re on mute Dave, says Claire. You need to take yourself off mute. 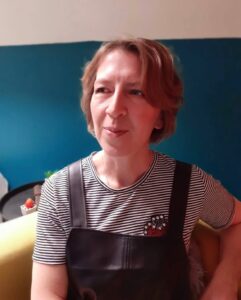 Monica Dickson writes short fiction. Her work has appeared in Splonk, jmww, X-R-A-Y and elsewhere. She’s been long and shortlisted for competitions and her story ‘Receipts’ made the inaugural BIFFY50 list. She won the 2019 Northern Short Story Festival Flash Fiction Slam and in 2021 graduated from the NSSF Academy.
More at writingandthelike.wordpress.com and on Twitter @Mon_Dickson

iThere are no comments