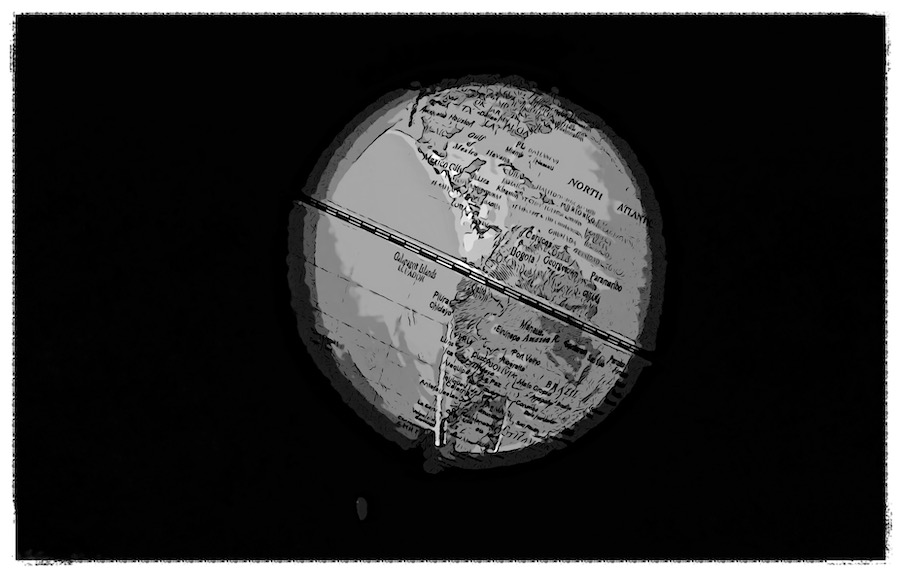 ‘Tell me about the olden days,’ said Bella, snuggling in beside Grandma, ‘when people could go wherever they liked.’

‘Oh,’ Grandma replied with a dreamy look in her eyes, ‘it was a different world. We travelled so far, saw so many wonderful places, met so many interesting people. We went on a huge flying vehicle called an aeroplane. Several hundred people were packed in close together in a big metal cylinder with wings.’

‘Where did you go in the airyplanes, Grandma?’ asked Bella, wriggling to get more comfortable.

‘Well, let me see.’ Grandma smiled, ‘I once went to Barcelona in Spain to visit my cousin.’

As Bella thought of her own cousins down the road, her brow furrowed in confusion. ‘Why was your cousin in Spain?’

‘Well, in those days it wasn’t like it is now when everyone you love lives close by. People traveled to different places, either to find work or because they wanted something different. If you really wanted to, you could work almost anywhere. My cousin got a job in Barcelona, so I went to visit him.’

‘It’s a busy city with wide streets, very crowded. There was a famous artist called Gaudi who designed some of the houses to look a bit like colourful forests, and an amazing cathedral which took over a hundred years to build. In fact, I don’t know if they ever finished it.’

‘Where else did you go on airyplanes?’ asked Bella.

‘We didn’t always travel on aeroplanes, we sometimes went on cruise ships. That’s a boat as big as an apartment block. It has a theatre on board as well as swimming pools, restaurants and shops. People would go and stay on the ship for a week or two to get away from home and visit all the different places where the ship stopped.’

‘Why would they want to get away from home?’ asked Bella, very confused.

Grandma hugged Bella and kissed the top of her head. ‘That’s just what people did then.’

‘Tell me about the places you saw on cruise ships.’

‘Well, one time your Grandfather and I went to Mexico. We got off the ship and went on a long, long bus ride to a place called Chichen Itza. There was a pyramid built by Mayan people who lived a very long time ago. It was grey, and hundreds of feet tall. There were lots of other ruined buildings around it, and archaeologists were trying to work out how the Mayans used to live. They believed they held big sports tournaments and human sacrifices.’

‘Hmmm. Let’s leave that for another day. It was so hot there that it felt as if the air burned your nose as you breathed.’

‘Much hotter than here, even on the hottest day in summer.’ Grandma paused. ‘I wonder what it’s like there now? I expect the jungle has grown back and hidden the pyramid again.’

‘Where else did you go?’ asked Bella, eager to hear more.

‘Well there was an awesome city called New Orleans that we visited a few times. It had a mix of old and new buildings and music and dancing in the streets. There would be jazz bands playing, people tap dancing, musicians playing in the bars, and people having fun in the street. There won’t be visitors anymore, but I expect the people of New Orleans are still dancing and making music.’

‘Did you always go on boats and airyplanes?’ asked Bella

‘No, sometimes we stayed in this country and went camping.’

‘Well – you take a tent.’ Bella wrinkled her forehead and Grandma continued before she could ask. ‘It’s a little house made out of fabric. It folds down into a small package so you can easily carry it, but when you put in the poles, it turns into a little house that you can sleep in. We would set up the tent in a field somewhere beautiful, and sleep in it for a few nights.’

‘No. We slept on foam mats in a big bag that you could crawl inside. It was very cozy. And when you woke up in the morning you could hear the birds singing and smell the freshness of the grass. Often when you stepped outside the tent there would be dew on the ground and your toes would get damp. Sometimes we would take the tent to a music festival and meet with lots of our friends.’

‘Well, you know when you watch music videos on TV? A music festival was like that in real life. It lasted two or three days and had lots of different bands playing. You could take your tent and camp at the festival so you didn’t have to go home in between. The concerts happened in HUGE tents. There was a market to buy beautiful things. There were bars and vans selling food. And the children would all play together and enjoy running free with their friends.’

Bella pulled out of her snuggle with Grandma. ‘Can we play at being in the olden days?’ she asked. ‘Please.’

Bella sighed and rested her chin on her knees.

Bella squealed with delight while Grandma went upstairs, returning with a white sheet. Then she went to the kitchen and draped the sheet over the kitchen table so that it hung down on all sides to reach the floor.

‘Go and get a blanket and some cushions,’ said Grandma.

Bella dashed to her bedroom to find a blanket and pulled cushions off the chairs in the living room. She returned to the kitchen to find that Grandma had made a long cut in the sheet at one end, and had pulled back flaps to make an opening.

‘Lay the blanket on the floor inside.’

Bella laid out the blanket and arranged the cushions on top to make a cozy nest inside the makeshift tent. She went back upstairs and returned with her arms full of teddies and dolls.

Bella spent all afternoon in the tent with her toys. She watched out of the opening while Grandma cooked tea. When tea was ready, she sat cross legged on the kitchen floor outside the tent and ate her hot dogs.

That night Bella slept in her tent on the blankets on the hard kitchen floor. She dreamt of running free in fields with her friends, flying through the sky in an aeroplane and sailing to faraway places.

After a lifetime of writing dry business documents which nobody reads, Jane Mooney has returned to her childhood passion of writing stories, and is surprised when people want to read them. She writes about ordinary people living ordinary lives. Jane lives in Yorkshire where she enjoys walking in the hills and watching the sunset.