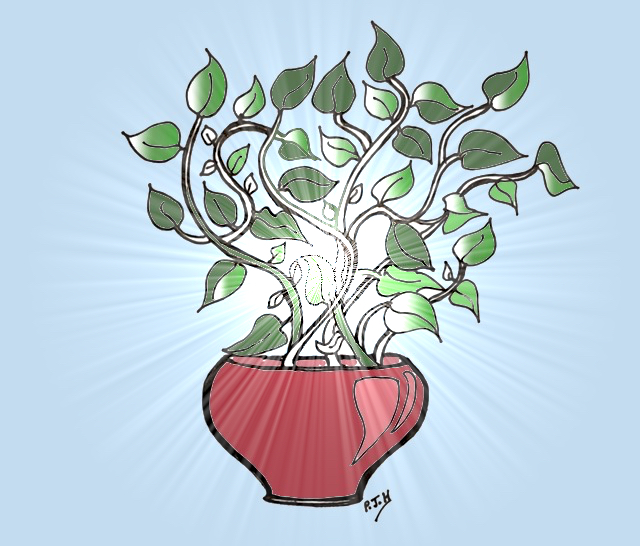 Creak, creak, creak. Men going up to Clarissa’s flat again, first one, then another. I listen and, after a while, the latest one comes down. Tramp, tramp, tramp, slower coming down, like they all are. Sometimes I watch these men from my window, heads bent, trudging. Perhaps she wears them out.

She does well out of it though. Her Instagram reveals smooth skin, huge Egyptian eyes, fantastic teeth. She looks good in Ralph Lauren, while I curse my poverty and the life I’m living. I earn just above the minimum wage, I wear Oxfam’s best, and my teeth are inward leaning. And beige. So I couldn’t earn my living that way.

She’s not been here long. I could scrape acquaintance with her, borrow milk – soya milk, more likely. But will she open the door?

She does, all charm and sheeny blonde hair. ‘Turmeric? No problem. Ghastly when you run out. One moment -‘

She leaves me in her hallway. There is a big shrub – no, a tree – on a low table and I’m fascinated. While she’s reaching into her cupboard, I examine the furled buds, pointy, shiny, with a hint of silver, and fine mauve lines, almost like plastic, and is that half a number I can see on one of them?

She gives me a posh carved box filled with teabags with little strings and labels attached. I demur.

Goodness. She wants to be friends? With me?

Creak, creak, creak, up the staircase I go at exactly six o’clock. She’s waiting, this time in a Balenciaga turtleneck floral dress that I know costs a grand plus. I gush, complimenting her. She makes an ‘Oh, this old thing’ gesture and leads me past the tree (I rub my eyes, but definitely a bud is sprouting a £20 note here and there), to her velvet sofa where I sit, facing a John Singer Sargent on the wall. I wonder why on earth she lives in this block of flats.

I sip the tea, pluck up courage. “I guess you’re not planning to live here long?”

“It’s not my only property. I see it as my office, sort of. I’ve a bigger place near the coast.”

“Yeah. Great, isn’t it? A friend did it for me. A professor. Genetics. Science is such a miracle.” She shines those lovely teeth at me, infectiously joyful. I’m still mystified and show it. She continues, “You know you can fiddle with the DNA and make a cell grow anyhow you like. Think about human organs grown in dishes from pig cells or genetically engineered crops. Change the blueprint, and your plant will grow into whatever you want it to.”

“Even a money tree growing real money! Actually my professor-person grafted another stem for fifties, but there’s been a glitch. He’ll sort it, though. He’s a sweetie.”

“And you can spend these notes in the shops?”

“Well, duh, if you couldn’t there wouldn’t be, like, much point?”

She says she only uses it for local purchases. It’s like her pocket money.

On my way out we pause by the tree. It’s losing its petals now and she scoops them up. I reckon there’s about £200 there.

“I’ll sort them out later. They do make a hell of a mess.” She drops the notes into a black Japanese enamelled dish.

All week I think furiously. I need one of those trees. I need glamour and beauty in my life, a John Singer Sargent on my wall. Would the Professor make a tree for me? I look into my old freckled mirror and think, why would he? But then, if I had money I’d look different.

I visit her often after that. She usually initiates. Perhaps she times it so I don’t clash with those men who tramp up and down the stairs. Each time, I eye that tree and the enamel dish. Taking a cutting wouldn’t really be stealing, she’s not losing anything. Those notes, they’re clutter, they’re a chore to tidy up. I’d be doing some pruning, neatening things.

One day I crack. I go, armed with a tiny pair of nail scissors and a plastic bag, and linger in the hallway by the tree. She makes it easy for me – she’s left the door open and is busy doing something in lounge.

Snip! I’ve done it. I also take some notes from the enamel dish because, hey, she’s not short. I fumble while pressing the sprig into the plastic bag, and that’s when I hear her.

I shudder. My scissors chink, clattering to the floor.

“Come and sit down. Let’s talk.” She’s smiling a thin-lipped smile, a nasty smile. No sign of the lovely teeth.

“Take a mo, here’s a tissue. Science is such a miracle – I’ve said that before. Did you know, one of those pointy buds has a lens? ‘Smile, you’re on camera!’ as they say. And have you ever heard of Smart Water?”

“Those notes in your pocket are covered in it. A special kind, so it marks you as well as them. When we rock up at the police station, you won’t have a leg to stand on. Shame!”

My face burns. I can’t say anything. I snuffle miserably into the tissue.

“I guess you might lose your job. A secretary at a little private school, aren’t you? They want squeaky clean employees, not thieves.”

I’ve always felt exploited and underpaid at the school, but it’s my world. I know those people, I fit in. What will they think of me? Whatever will I do if they sack me? I’m weeping openly now.

Her voice softens. “Here, don’t cry, it’s not all bad. There’s a middle way. You’ve got on-line banking on your phone, right? Make a standing order to me of £100 a month – that won’t break you – and we’ll say no more about it. And, by the by, I’ll have that cash back, if you don’t mind but, if you really believe in money trees, you’re welcome to keep the cutting.’ She .grins. ‘I’ll make you a herbal tea while you sort out the banking.”

It doesn’t take long. And then I’m on my way back downstairs to my flat. 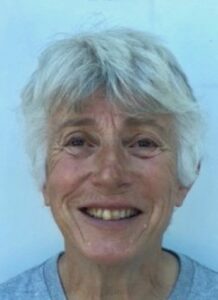 Joanna Lane is the author of ‘Mother of a Suicide’, a deeply personal account of the loss of her 31-year-old son. She tells the story of her search for the reasons behind the tragedy and her discovery that a rarely diagnosed but common condition, hypopituitarism, almost certainly lay behind her son’s despair. Despite having met with multiple obstacles in the health services, Joanna is engaged in ongoing attempts to raise awareness of this condition so that other lives might be saved. She is particularly keen to reach those who have been diagnosed with fatigue illnesses such as ME, Chronic Fatigue Syndrome, Fibromyalgia and Metabolic Syndrome, particularly if they have suffered a head injury in the past. She and her husband have set up a charity, Christopher Lane Trust, to offer support and advice on obtaining the correct diagnostic tests at www.christopherlanetrust.org.uk. Joanna has a degree in English Language and Literature from Oxford University, and taught English as a second language for many years.  She lives in Surrey with her husband, near her two surviving daughters and three granddaughters.