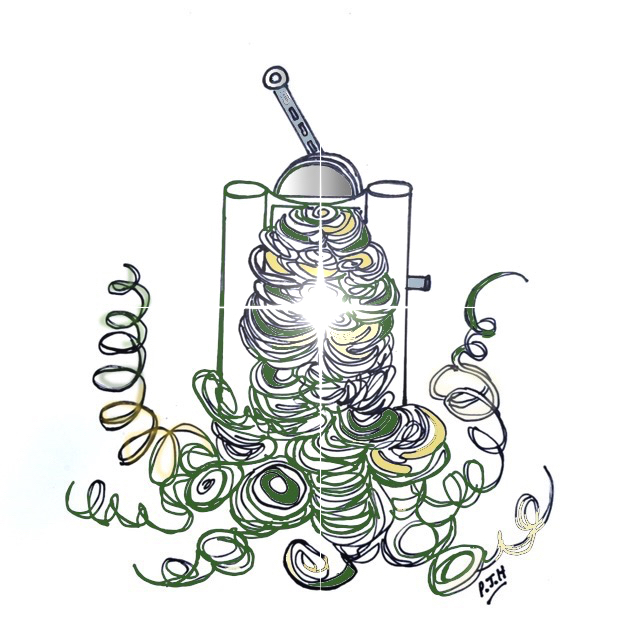 Not an effective aid to weight loss or healthy eating.

My husband gave me this electric Spiralizer for my birthday. I had been hinting at gold hoop earrings, but anyway. He had been suggesting for some time that we ought to eat more healthily so I can lose the baby weight and things can go back to the way they used to be before I fell pregnant. There are occasions when I too would like to turn back time – to five years BC (before children) when we hadn’t even met.

I didn’t want to disappoint him – he had remembered my birthday, after all – so I set about preparing the spaghetti substitute made from courgettes from a recipe I found on the internet. I watched the shiny, green vegetable rotate as the machine magically whittled it down to a mound of pale wet strands, and idly wondered whether anyone had invented a similar device for human beings to trim away their lumpy bits, leaving them smooth and streamlined. I would so buy one of those.

The courgetti was not a success. My husband took a mouthful, then pushed his plate away and demanded real pasta, although he said I should persevere with the vegetable version. I did, and found it wasn’t too bad if I smothered it in butter and grated cheese.

Never one to give up at the first hurdle, I experimented with other vegetables, but tomatoes turned to mush and cauliflower ended up as crumbs. However, the fragments of carrot strands that stuck to the wall could pass for a modern art installation if you squinted a bit. And what, I ask you, is the point of a spiral mushroom?

I can’t see how this device is supposed to be an aid to healthy eating since most vegetables ended up in the compost bin rather than on the plate. I am going back to preparing my veg by hand in rounds and batons and florets, because at least the effort of cutting them up expends a few calories.

Two things saved this machine from the charity shop: The first was reluctance to incur my husband’s displeasure at my ingratitude but, since he never opens any of the cupboards in the kitchen, he probably wouldn’t notice it was missing. The second reason was the curly fries. The curly fries were a revelation and are now the main feature of my lunchtime menu. 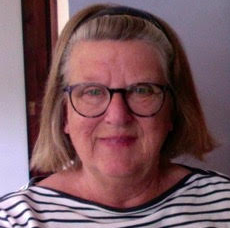 Hilary Ayshford is a former science journalist and editor, living in rural Kent in the UK, with her elderly Labrador. She writes flash, micro fiction and short stories in a variety of genres, from humour to horror, and is currently working on her first novella-in-flash.