As we move towards Father’s Day, I thought it only fair to give equal shopping coverage to our male counterparts in response to my previous “Please Don’t Do This” guide in The Gifts That Don’t Keep on Giving which was, in summary, “for the love of Mary Magdalene, stop with those IOU gifts that require your female friends to redeem, making it homework for them and not so much a gift. And sure, yes, it’s the thought that counts – if the thought was “I bet Mom would love to *make* herself an appointment for a pedicure once she figures out *how* to fit it into her schedule by switching around seven other things, remembers to shave her lower legs, and works out how not to feel guilty for spending her grocery money on a hot stone rub.”

So, if you have ever stressed about the perfect gift for your husband/boyfriend/partner, then you have skated right past the most obvious gift zones, most of which do not actually require an “add to cart” action. This advice will serve you so well – and so far beyond Father’s Day, that you will probably erect a statue of me in your garden. And much of this very basic information can also be filed into the ‘relationship-saver’, ‘get-out-of-a-jam’, and ‘I-might-have-spent-too-much-on-those-shoes’ categories as well.

Men really just want to feel regular satisfaction in four quadrants. Tap into about half of those quadrants each day, and you will be giving your man everything he needs to maintain a sense of continuous bliss.

Women don’t have those four quadrants. We have somewhere in the 947 constantly-changing-buckets range. That is why we get so offended when our husbands dip only into those four quadrants when presenting us with gifts. It’s not because they don’t know us well enough or don’t care or aren’t trying, it’s because those four quadrants are really, really important to them and so tapping into them makes sense. And, before you call foul on this whole train of thought, you should know that, if he didn’t stop reading at ‘hot stone rub’, my husband is one thousand percent nodding along enthusiastically right now.

Yep, those are the hopes and dreams for the day – each day – when the typical man hits that ‘off’ button on his alarm. Preferred order? That may be tricky – perhaps even differing from male to male, and maybe even from day to day – but I suspect that is as complicated as it gets.

For the guy that shares my bed, the preferred order is this:

They want you to ask about Star Wars or Jurassic Park, just so they can have a chance to say space things or dinosaur stuff. And they definitely want to know what’s hiding underneath your clothes, even though you may think it’s shaped differently than before or you’re not as happy with it as you once were.

Let me say this in a different way: Your husband doesn’t want another multi-tool or flashlight or tie or a giftcard. He wants something with bacon and grease that may mean that the bathroom has to be remodeled later.

And he wants to eat it while watching something with aliens and explosions and very little dialogue that he’s already seen several dozen times and, yes, he’d much prefer to watch it alone. That’s right, you don’t even have to stay. It’s better that way, then there will be no need for explanations about who is on what space team and no chance that he’ll see you sneaking peeks at TikTok. Leave the house. Go out.

But, before you leave, “lose” your keys. Lose them right on the kitchen table where he will be sure to find them easily. And, as you head out the door, praise his amazing eyesight, throwing him a quick wink with a just a hint of how you might reward him later.

That is all the gift he needs. 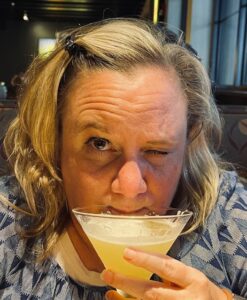 Jyl Barlow is an American writer whose humor is often lost on, well, Americans, but most of all her mother-in-law. Jyl is married with two (step)children and recently began a journey as a beekeeper as that seemed easier than raising teenagers. Follow her stories on whichwaysup.blog or community.today.com/user/jyl-barlow.