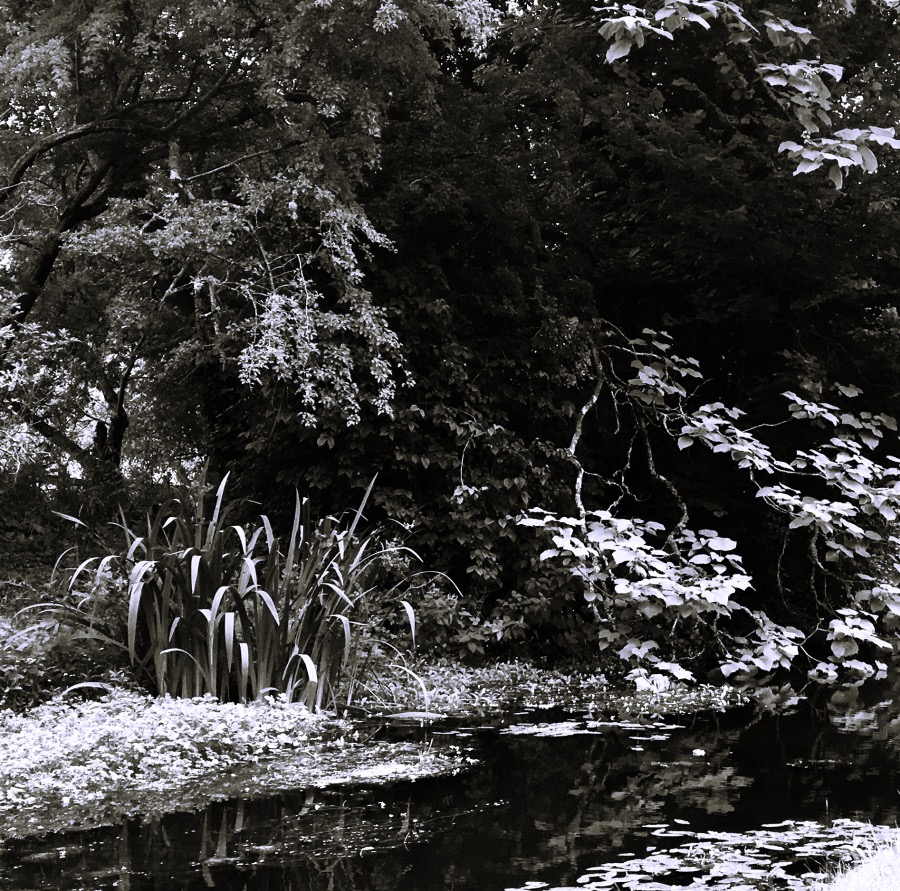 I’m Margaret Goodenough and I’m your guide for this afternoon. Photography is permitted outside the house, but not inside. And please switch off your phones. Many thanks.

My talk won’t last long, but as my husband Brian says I can witter on so, if you do lose the will to live and wander off, I won’t be offended. But bear in mind that you’re a small group, so I will know who you are.

James Hampton lived here at Trevone House between 1863 and 1868. He had the house especially built by an architect friend. His vision was for a community of artists and craftsmen to visit, share ideas and work together in these wonderful surroundings.

Everything in the house is handmade. If you look at this wall hanging designed by James Hampton – actually it’s very faded, if you know the original – you’ll see a trellis, an array of flowers, and this squiggly line running through. The squiggly line represents the local river, the Stome. I have to say I walk my Airedale by the Stome every day and I’ve yet to see a flower that looks anything like these. But there we are, artistic license, I suppose. My Airedale, by the way, is called Bruce. Thought you’d like to know that. He’s adorable. He loves everyone and everyone loves him. No discrimination whatsoever!

Anyway. As a child James Hampton liked nothing better that dressing up in his suit of armour and parading around in the woods on a horse. If you look at these tiles you’ll see that they’re all more or less the same – sunbursts and what have you. But this one, which, admittedly, looks a bit blank from a distance, does have an outline of a horse. Any questions? No? Moving on.

Now, Trevone House didn’t have a visitors’ book. So what do you do if you’re a visitor and there isn’t a visitor’s book? You scratch your name on one of these panels of glass in this window, of course! We’ve got forty-seven signatures of the most prestigious artists and craftsmen of the day – as well as their wives and girlfriends. They can’t all have had diamond rings to scratch the glass so how they managed it I’ll never know.

The rain is holding off, so I suggest we go outside while we can. Clock that medieval-type door as you go through. Could the last one pull it to? Many thanks.

Originally there would have been a trellis running along here. Remember the trellis on the wall hanging? Yes? This is the well. It was the only source of water for the whole house, so a very precious structure and suitably crowned with a turret. Gosh, the garden looks so much better when there’s a bit of sunshine. You should have come in the summer. Not that we had one. Which is why I’m off to Mallorca next week! Brian wanted to go back to Cyprus again this year but I put my foot down. You’ve got to ring the changes every so often, otherwise you get stale. Same bars. Same scenery. Same faces. You wouldn’t have got James Hampton going back to the same hotel in Cyprus every year!

Anyway. The house was built with the principal rooms facing north. Consequently, his nibs’s bedroom was always freezing cold and dark. What an architectural gaffe! The lancet windows are original. As are the bull’s eye windows. The leaded lights came much later. The roof slopes steeply up to join roofs from other parts of the house. A community of roofs, you might say. Which is exactly what Hampton had in mind. And there’s a pennant, flying from the rooftop. Well, it’s not actually flying because it’s metal. But do you see the ubiquitous horse beside Hampton’s initials?

Those purple verbenas are absolutely lovely, aren’t they? I’ve got a stand of them in my garden. Not at the back of a bed, where you so often see them, but at the front. And peeping through them are my Bishop of Llandaffs in all their scarlet glory. Brings joy to my heart at this time of year.

Will you look at those flowerbeds! I don’t know what’s happened to the volunteers round here. Nobody seems to want to do any weeding. I’ve got to say it – it’s so difficult to get the staff these days. They come along thinking it’s going to be all tea and chit chat, not believing for one moment they’ll have to do any work.

I can feel a few spits and spots of rain, so I suggest we head back in the house. Careful not to trip over the curator’s cat. Last one in, please close the door. Many thanks. It was nice to get some fresh air, wasn’t it? It can get a bit muggy in here. Any questions so far? You must be dying to ask me something… No?

Well, here we have the dining room. Feel free to take one of these highly comfortable, easy-to-use Trevone House folding stools. They open out, like so, and they’re very light and easy to carry. I have one in my kitchen for when Brian helps with the vegetables.

Speaking of help, I believe that Hampton’s wife Sarah struggled terribly with the servants. She came from a poor background and wasn’t educated but, when Hampton fell in love with her ethereal beauty, she agreed to marry him. So she wasn’t stupid, was she? Marrying a man with such a big house. Apparently, in company she kept a low profile but she did have to talk to the servants. No doubt her accent would have been similar to Pam Ayres’s. I like Pam Ayres myself, but you can just imagine that the servants must have run rings round her.

Please follow me upstairs. The curator lives in and his quarters are off that corridor so we won’t go down there. Though I think he’s actually at his mother’s today. Through here we have the library and the minstrel’s gallery. They entertained themselves in the evening by reading poetry to each other. That must have been fun.

This wainscot is relatively recent. We’ve discovered that if you open these four little panels here, there’s an original Hampton painting behind. You can see how the colours are fresh and crisp. We love coming in here and opening up these little doors. We were so excited when it was found.

I must tell you: so inspired was I by all this artwork that I’ve started going to classes myself. Now I know where I am with acrylic because it stays in one place. But get me a few tubes of watercolour, and I’m lost. Make washes, the teacher says, in layers. Well, mine came out looking like it had been in the wash. With a lump of coal. It was supposed to be mountains fading gradually into the mist.

Any questions yet? Right then, on we go.

Here, in the bedroom, we have a copy of an original daisy hanging made by members of the local needlework circle. Lovely, isn’t it? It only took them eighteen months. And lo, behind these cupboard doors we have another hidden gem, a wall painting. It’s a bit difficult to make out on this side because of this set of white shelves built over it. It’s thought to have been executed by …the name will probably come to me when I’m about to bite into my slice of coffee and walnut in the tearoom. I’ve asked them to save me some. They do some lovely stuff in there, so make sure you pop in.

As time went on, Hampton’s stash of money disappeared. They hit a credit crunch you might say. His gang of friends visited less and less. They’d moved out of their twenties into their thirties and priorities had changed – families and suchlike. Sarah complained that no one called on them because they were so far from London. She also contracted a mysterious illness which meant that all she could do was sit on the sofa reading books. I’d like that illness – it sounds like a good one to me! So they sold up, moved up to town, and never looked back.

Now I’ll take you back downstairs and leave you in the sitting room to have a good look round. You’re the last tour of the day, so you’re free to wander round the house at your leisure. Until we close that is, at five. We don’t want any of you to get locked in. Please leave your stools in the corner under the window. That would be very kind. And before we go, has anyone got a question? No? Not even a tiny one? You can ask me anything you know. Well, within reason. No?

Chrissie Gittins’ first short story collection is ‘Family Connections’ (Salt). Her second, ‘Between Here and Knitwear’ (Unthank Books), was shortlisted for the Saboteur Awards and selected by Helen Dunmore as one of her top two 2015 collections. Chrissie’s stories have appeared on BBCR4 and in The Guardian, The London Magazine, Wales Arts Review, Litro, Unthology 6, Fictive Dream, Lunate and Postbox. She has also published three poetry collections for adults and five for children. www.chrissiegittins.co.uk, Twitter: @ChrissieGittins