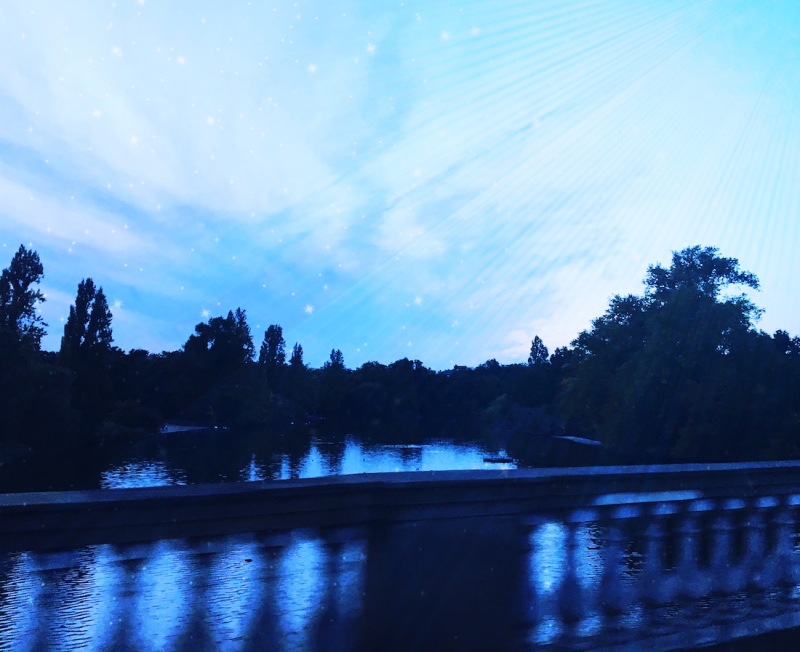 Woken by the erratic humming of a diesel engine, I notice a stinging sensation in my lower abdomen. I turn over to stretch it away and feel another pang.

The red digits on my radio become warning lamps.

The pain seems to be connected to my breathing. I must ignore it and go to sleep. Tomorrow, I’m helping Joseph’s mum clear out his house.

Another pang although I was breathing as gently as I could, taking in only minimal levels of oxygen. I grab the iPhone by my bedside. A trapped nerve seems most likely. I’m told to massage the area for ten minutes.

On the clock, time passes in red.

There is no change. Likely options now include hormonal dysfunction due to early menopause or a broken rib. I’d prefer the broken rib. It says on Dr Med that ribs heal by themselves.

Except.. the pain isn’t in the bone.

It isn’t in the bone!

Lower abdomen tissue pain. Causes include liver cancer, an undiagnosed disease in one of the reproductive organs or cirrhosis due to excessive consumption of alcohol.

I will remain in bed. Distract myself by thinking of something nice. Flowers. Beautiful flowers.. No, not lilies. And take away the roses too, for Goodness sake.

The red digits signal my countdown.

I’m aching everywhere from the throat down, now sitting up hugging myself in the duvet whilst searching Cancer Research UK for proof to falsify the most terrifying hypothesis. With cruel timing, the miniscule letters on my phone bring on a headache just when I get to the paragraph about how breast cancer can spread to the brain.

She died of a brain tumour, but I don’t know where her cancer originated. I wonder if it could be hereditary. Like the dementia on my father’s side.

At what age do people get Alzheimer’s?

I switch on the bedside lamp. But the light that cleared monsters from my childhood bedroom has no power over my adult terror.

I’m sitting at my desk, still wrapped in the duvet. From The Alzheimer Society’s website I learn that four per cent of people diagnosed with the disease are under sixty-five years of age. It’s called early-onset or young Alzheimer’s and you can get it in your forties. This means that I could get Cancer and Alzheimer’s at the same time.

I am an only child. Who will look after me?

The open bottle of Sancerre screams from the fridge, but if this is liver disease wine will do me no favours. Instead I drink Evian from a large bottle whilst I type reminders into the diary. ‘Check with insurance company re what policy covers’ and ‘ask doctor if dementia will mean I won’t know I have cancer.’

Searching old emails for information about Aunt Bella, I find nothing. Mum consistently refers to the disease as ‘Bella’s problem’.

I am standing in the bathroom with the dimmable LED spots on maximum and a torch in my hand studying my face in the make-up mirror. My eyes are red but that’s to be expected considering the amount of wine I drank at Joseph’s wake. There are no visible signs of jaundice, not a hint of yellow in eyes or skin. It feels good to rule out end-stage cancer of the liver, pancreas or stomach.

I’m back at the desk. My headache is clearing now that I’ve gulped a litre of Evian. I am also encouraged by the fact that aside from occasional memory lapses, (and problems with judging distances, which mean I will never fly an aircraft) I can’t tick any of the symptoms of early-onset Alzheimer’s.

But the abdominal pain remains.

Then I could also ask her what type of cancer Aunt Bella had.

OMG. What if Joseph’s mum told him it was nothing serious? She’ll be regretting that now.

I must go back to bed. It is imperative that I go to sleep within the next ten minutes. Nobody wants to be awake at four AM. More people die at that hour than any other time. And even for those who make it through, it’s the hour of death in other ways. During the days, our worries compete for attention with the practicalities of life. Murky and confused, they settle into the background as we’re distracted by work, cooking dinner and crossing the street without getting run over. But at 4 AM, the demons stand tall, blood-red flags on a background of darkness.

My demon’s name is shame. Shame caused by relief at not being in Joseph’s shoes. And now my punishment.

Patti claims it’s all out there. Not just what we have said, but every thought we ever had. The universe knows.

During daytime, I disregard most of what Patti says. In the night, her words loom.

It says on the Internet that one in ten people are unwillingly awake at four AM either because they can’t go to sleep in the first place, or because they wake up due to anxiety or depression.

I see them. An elderly lady looks out the window from her hospital bed, recalling the time when she was part of the night. A young woman rushes barefoot on cold floors to make camomile tea. Another stares into the back of her spouse before getting up to Google untraceable poisons.

Towards the end, Joseph chose to be a member of this four AM community. ‘Time is running out, Lizzie,’ he told me, ‘I must make the most of it.’

An hour a night for the last twenty years. I use the calculator on my iPhone to work out that this amounts to 7300 hours, which comes to three hundred and four days. Seeing that one hour a night is a conservative estimate, it would not be unreasonable to suggest that so far I’ve spent a year of my life lying scared in bed. I consider how much Joseph would have appreciated another year and decide to put a stop to it.

‘Anybody awake?’ I tweet. ‘Just read that one in ten people lie awake at four AM.’

Prompt reply from @StaceyLondonFun. ‘My sleep tracker ran out of battery, kept beeping. It woke me up. No way back. Menopause. Hot flushes.’

‘It’s the full moon,’ tweets @Patti-harmonhy. She has actually bothered to attach a photo of the moon taken from her kitchen window. I notice her sink is full of dirty dishes.

‘There are evolutionary reasons why we lie awake,’ tweets @StaceyLondonFun. ‘The body senses fear and stays alert. We imagine scenarios. Plan where to find food and shelter.’

Oh. Does this mean I am healthy?

I head to the kitchen, finding the Sancerre in the fridge.  As I pour a glass, I notice the pain has disappeared.

The digits on the fridge are dancing.

My abdomen is clear. Unlike Joseph, I will see tomorrow.

Monsters in the Night III

Ballet on the Keyboard (Monsters in the Night IV)