Having survived the first six weeks of life with her pacemaker, our contributor shares her highs and lows

Twenty-four hours post implant it is declared that I am fit and healthy and ready to be discharged. Feeling far from it, I telephone home for someone to collect me. Husband at work, so the responsibility falls on my son.

Spotting his car at the top of the car park, I struggle up the hill, complete with overnight bag and feeling somewhat mortal. Greeted with: ‘Hi Mum, you ok now? Can I borrow twenty quid till next week?’
In my weakened state I give in.

Arrive back at our farmyard to find next door’s cows, having broken the fence down, are making a beeline for my flowerbeds and stripping any greenery in their path. Immediately pick up two sticks and run around like a dervish, waving them in the air and shrieking at the top of my voice. Faced with this, most of the cows give up and go back. One decides to hang on for the prized flowers and it takes a fairly determined effort on my part to see her off the premises. Eventually she decides that the look in my eye is meaner than the look in hers and gives up. She wanders down the drive and into the village.

I remember my pacemaker and immediately feel dire.

I stagger inside and ring the farmer next door. He is out. I leave an incoherent, sobbing message about his ‘bloody cows’ and telephone my husband. He is out of range. I leave another incoherent sobbing message and ring my eighty-year-old parents. My mother hasn’t got her hearing aid in, so doesn’t understand a word I am saying. My Dad’s OCD kicks in and he starts fretting about the fencing. My son makes me a cup of tea and tells me to chill.

I ring the hospital and inform them that I don’t feel very well.

I now embark on six weeks of not raising my left arm or doing anything particularly meaningful with it. I struggle with the idea that, if I do inadvertently raise it, my leads will immediately become displaced and death will occur shortly after. Am left to do Jane Fonda Cardio Workout Level 1 with my arm dangling at my side. This feels peculiarly unbalanced.

Find hanging the washing out extremely difficult and on occasion suddenly realise I am using BOTH arms to peg out. I then have to rush into the kitchen and drink copious amounts of tea while taking my pulse every two minutes.

Sleeping now becomes one of the most stressful activities – particularly if, like me, you are a stomach-sleeper. Getting undressed and into bed is hard enough, but turning around once there is nigh impossible. The prospect of six weeks staring at the ceiling is not conducive to a good night’s sleep. It takes more manoeuvring than the Jane Fonda Cardio Workout Level 1 to get onto my left side and then I feel the pull on the scar and am sure the device is about to make an unscheduled appearance. More huffing, puffing and dynamic body-throws and I am on my right side. Slightly more comfortable.

Then my husband, in his sleep, turns to face me and I am enveloped in his snoring. At this point I hate him, but at least the murderous thoughts take my mind off my own discomfort.

Sorry gents, but in the main, this next bit is probably more a female problem. Issue is: how in hell’s name are you supposed to fasten your bra single-handedly? Equally puzzling: how can a man I have lived with all these years be so completely inept at helping me get into the damn thing? He never used to have a problem with the reverse procedure. And – there is no delicate way of putting this – if you have boobs bigger than a tennis ball, abandoning support is simply not an option.

It also seems that the implanting of my device has transformed me into the bionic woman. I now feel that I should be able to run up mountains, wade through streams and kill wild animals with my bare hands. This is strange, because pre-pacemaker, I was quite happy with just taking the dog for a walk.

I become a phone app junky. I get a fitness app that calculates my every bodily function. I download running apps. Running? The last time I ran was some 30 odd years ago and that was probably to the bar before they called last orders. I have exercise apps and instructional apps too but, most importantly, I have several pulse-reading apps.

I can take my pulse with my finger tip, with my whole finger or even with just my face.

Monitoring my pulse is now a major part of my daily routine, much to the irritation of my entire family. Not content with just one reading, I often have to check it out on the other apps, to make sure the first app got it right. This is a habit I may have to break as, when out on a ‘power’ walk in my pulse-monitoring absorbed state, I take a left instead of a right and narrowly miss falling off the banking and into the river.

So there you have it: the first six weeks of life with my pacemaker. These are only some of the issues I encountered and I dare say many of you will have experienced others. But I have survived. And, I like to think, have kept my sense of humour! 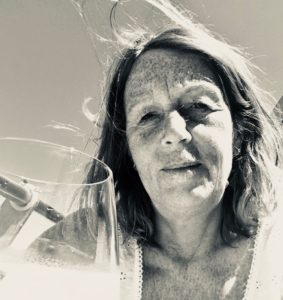 Jane Steele is a retired teacher based in North Yorkshire. Having found herself with a pacemaker and three wires in her heart aged 55 she decided it was time to make some changes. So, she wrote a book of poetry, became a presenter on local radio and found time to sort out her garden.