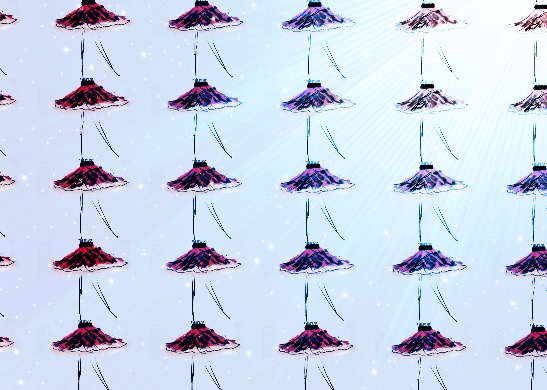 ‘Oh, please come and see us!’ we implored him.

I am struggling, thirty years on, to untangle the rationale for our invitation. Melanie and I had the world’s biggest crush on Colin, a friend of our older sisters who thought we were ‘alright’ for fourteen. Col was funny and understated with soft brown hair, nice joggers and a bouncy walk that melted your insides. So why would we engineer a situation in which he would get to observe us, at length, in such an unflattering context?

In our civvy wear, Melanie and I were the epitome of nineties cool: combat trousers, layers of differently-strapped vest tops, don’t-give-a-fuck kohl and unruly hair in assorted reds and violets. Absolutely smokin’, we were – to a certain breed of grunger. For the school production of Oklahoma! we would be styled as charmless village simpletons: bell-tented in massive gingham skirts, woollen-shawled, and hair yanked into historically inaccurate bonnets that gave maximum exposure to the slapped-cheek effect of our rouge.

Maybe there is something fundamentally attractive about watching two-dozen fourteen-year-olds from a coastal town in the not-quite-North-East-of-England failing to emulate the lives of American settlers through the power of song. Maybe he had nothing else to do. For whatever reason, Col was there on opening night. Six rows from the front. Directly opposite our position in the chorus line.

All was progressing well until the nod-based choreography kicked in: nod to the left, nod to the front, nod to the right in glorious synchrony. Yes? No. I went the wrong way and was committed to alternate nose-to-nosing with a wide-eyed Mel – her face eddying in opposing ripples of hilarity and dismay – and a po-faced Tonya Reynard who was still well narked not to have got the lead. The unscheduled face-time resulted in Mel and me getting the giggles.

Despite having a pelvic floor as taut as a freshly-laced corset, the combination of nerves, uncontainable mirth (intensified by the marble glares of TonRey) , and straining for those baritone notes, was never gonna fly. Nod-induced incontinence is no joke. Wetting yourself on stage at fourteen, in front of 137 of your neighbours and your fantasy boyf, is the opposite of hilarious. It’s a serious attempt at social suicide.

The wee broke through as an unrelenting downpour. It dwarfed the force of the wind sweepin’ down the plain and left the wavin’ wheat smelling far from sweet. It was as if animal-me was protesting the whole contrivance – the pointless expenditure of effort, the splurging of adrenaline. It was a territory-grab. A damp line in the sand that said, ‘What in the name of all that is evolutionarily advantageous do you think you’re pissing well doing?’

But for Melanie’s split-second thinking, I would remain a recluse to this day. I picture myself as an outsized paper bag, breaking into a lumbering jog at the merest glimpse of a Winford Comprehensive alumnus. Returning to my hometown as an adult would’ve been out of the question. At a conservative estimate, tales of my untimely urination would have spread to at least 12.7 % of the population. That’s upwards of 8,000 piss gags to avoid.

Mercifully, Mel bestowed upon me the greatest act of teen-to-teen kindness ever bestowed. Call it eerie levels of prescience, call it poor circulation, but my friend had seen fit to wear thick, uncommonly-absorbent socks under her chequered leg-tent. She immediately engaged in a vigorous foot-swishing action, mopping up my wee at a rate to rival any power suction spill-buster. Accordingly, the only thing that ranneth over, was my gratitude. Sure, Melanie went on to steal all the best boys – including gorgeous Col – but that was no biggie, considering.

Despite Mel’s act of charity, I did not emerge unscathed. My flashbacks take the form of an abrupt full-body shiver, followed by the discomfiting feeling of warm soggy thighs. The prosaic explanation for this is that from time-to-time the memory bubbles its dreadful way to the surface of my consciousness. The more metaphysical reading is that in a proximate universe – the Sockless Mel one – my social grave is being trampled. Listen carefully and the cosmic twin of an audience member will be heard to wonder, their wistful gaze directed to where once stood a stage, ‘Eeeee, whatever happened to old piss-pants-puddle-duck?’.

When fate lobs you a line, you maintain a white-knuckled grasp. I will decline the invitation to attend the Winford Class of 1992 Reunion. Tonya may have got a bottle of Mad Dog to keep her gob shut but, much like kiwi-flavoured fortified wine, all good covenants must expire in the end. 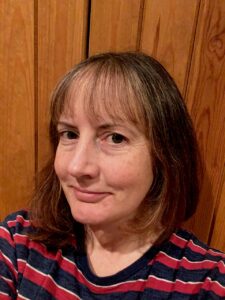 Lucy Goldring is a Northerner hiding in Bristol. She’s been shortlisted by the National Flash Fiction Day (NFFD) three times and won Lunate Fiction’s monthly flash competition in 2020. Lucy was nominated for Best Small Fictions 2020 by both NFFD and 100 Word Story. She writes a lot about climate angst whilst trying to manage her own. Tweets @livingallover