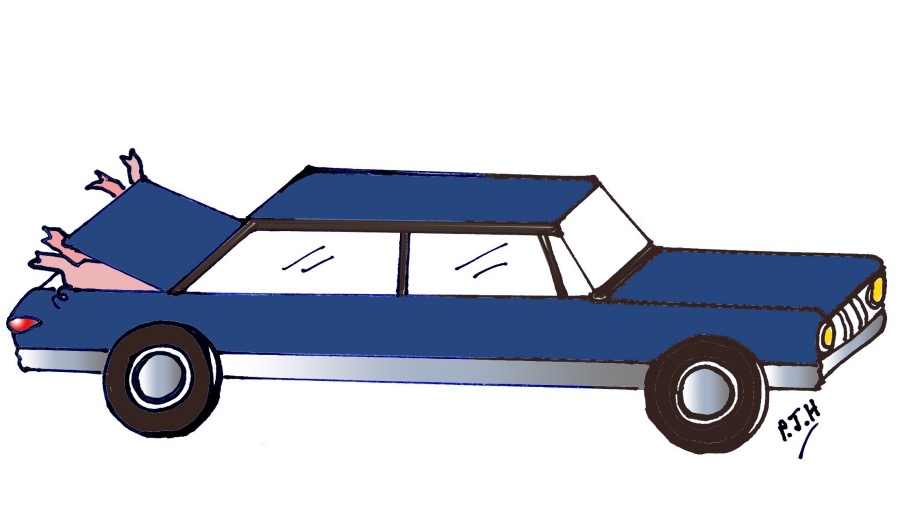 Fatty Betty was a pig that ate everything and eventually became so extremely fat that she had difficulty walking. Her belly dragged on the ground and her legs could barely carry her because of the thick calluses that hung all over her chubby thighs. Otto was not surprised when, one day, Sven and Sten knocked on his door to tell him Fatty Betty had died.

‘Where is she now?’ Otto asked.

‘In the trunk of the car,’ Sten said.

Sven opened the trunk and they all stared at Betty’s body crammed inside.

‘It’s our fault,’ he said. ‘If Father gets to know about this, we are in more trouble than Fatty Betty.’

‘Calm down. It’s not that bad,’ Otto said. ‘I know your father and he’s like a father to me too. I wouldn’t worry too much. When did she die?’

‘We don’t know. That’s the worst part,’ Sven said, glancing at Sten. ‘We promised to keep an eye on her. Maybe we could drive her to the butcher. He might give us some money for her.’

‘The butcher isn’t stupid. He’s got a nose like an old hound, and he’ll notice if the meat is fresh or not,’ Otto said.

‘These are difficult times, and we need money. If the butcher can sell the meat he will,’ Sten said. ‘But we must hurry up. When Father comes back from his trip and notices that Fatty Betty is gone, he’ll blame us. Fatty Betty was so dear to him. I’m sure he loved her more than both of us.’

‘What about the car? Does your father know you’re borrowing his car?’

‘We’ll be back before him, so he’ll never know. Let’s go see Oskar. He’ll tell us what to do,’ Sven said.

‘I’ll come with you, but let’s take the road through the forest and avoid the village. You know how gossip spreads.’

The grey Ford roared, taking off with the three boys and Fatty Betty along the narrow and bumpy road.

Ten minutes later they stood in the hallway of Oskar’s small, red cabin in the forest. Oskar’s hunting dog, Betsy, barked at them as they entered the kitchen.

‘When did you find her?’ Oskar asked.

‘Not long ago,’ Sten said, patting Betsy on her head. She wagged her tail and pressed her fluffy body against his legs. ‘What should we do with her? Father will get mad when he finds out.’

Oskar looked at his friends and at Betsy. He scratched his head and leaned against the sink.

‘Why don’t we ask Bert what to do. He’s smart. He works for the bank,’ Sven said.

‘I’ll drive,’ Oskar said. ‘Don’t worry, I’ll drive carefully. Don’t look so scared, Sven.’ He went out, walking towards the car. ‘But first I need to take a look at Fatty Betty.’

The clock had struck three in the afternoon when they reached Bert’s parents’ house. It lay further down the road where Oskar lived, and it always felt like they’d reached the end of the world when they arrived. The road had not been evened out after the winter, and the holes in the ground made the car’s chassis scrape the ground a couple of times.

Bert’s father opened the door. He was a big man with dark, thick hair and an untrimmed beard. When they were children and saw him for the first time, they had thought he was a cave troll and run away.

‘He’ll be home soon. Come inside. So, you have Fatty Betty in the trunk?’

‘Yup,’ Sven said and took a deep breath. ‘First, we pushed her into the back seat and strapped her with both seat belts, but then when me and Sten stood and looked at her, it didn’t feel right. So instead of having to stare at her in the rearview mirror, we decided to put her in the trunk and ask Otto for advice. But that didn’t help much, so, we drove to Oskar. And now we are here to ask you and Bert for advice.’

Bert’s father grunted and crossed his arms. The door opened. ‘Bert, you’re back. You have to help us.’

The car jolted along the narrow road through the forest. Bert, Oskar, Otto, Sven and Sten were on their way to Carl. Carl worked at the town’s only timber plant. He had the strength of two men, people said, and according to the girls, he was handsome too. They were sure that Carl would come up with a good plan. When they were almost there, the car hit a bump and the boot lid flew up.

‘Stop the car,’ Sven said, rushing out almost before the car had come to a halt. ‘She’s still there.’ He closed the boot lid. ‘Ok, we can go now.’

Carl looked at the car, his friends and at Fatty Betty. ‘I’m too big to sit on someone’s lap. You do it.’ Carl pointed at Bert.

‘I work at a bank,’ Bert protested.

‘Bank or not, you’re the smallest here. Unless you would like to accompany Fatty Betty in the boot?’ No one argued with that, so Bert squeezed in with Otto, Oskar and Carl in the back seat. He held tight to one of the front seats and off they went. ‘Drive faster. I saw the neighbour in the field nearby earlier today and he might come back.’

‘Nearly there, boys. We’ll soon be on the main road.’ Sten turned right towards town. ‘Damnit. The boot lid is open again.’ He stopped the car and Sven climbed out to close the lid.

‘She’s gone,’ Sven said. We must have dropped her somewhere on the way.’

It was silent in the car for a few seconds.

Five minutes later they saw Fatty Betty lying on the road. The brothers dragged Fatty Betty to the car and pushed her into the trunk.

They all helped to press her down into the trunk again. After some effort, only the hind legs were visible. Sten tied a rope from the boot lid to the tow bar.

‘I hope we’ll be able to get her out of there,’ Sten said.

Carl frowned. ‘Let’s wrap my jacket around her legs, just in case. We don’t want to be caught by curious neighbours. If Gun sees us, we’re doomed.’

‘The weird lady, who keeps her hens in the kitchen and likes to smoke cigars? Lives behind the old dairy factory?’ Oskar said. Oskar had met her once and could still remember the odd smell she brought with her.

Ida looked at the men, then turned back to where Fatty Betty lay. ‘How about I get you a piglet instead? I got plenty this year, and then you can feed up a new sow. It’s win-win for both of us,’ Ida said. ‘Take the offer. You’ll not get a better deal, and your father will be pleased to see a new living pig.’

Sven and Sten looked at each other.

‘What will you do with Fatty Betty, Ida?’ Sten said.

‘She still seems fresh enough for meat, so I guess I’ll make sausages out of her,’ she said, tapping Fatty Betty on her back. She took a puff on her cigar. ‘One more thing, boys. I think you should be quiet about our little bargain. I don’t usually give away piglets – especially not for an old sow like this. A dead sow too. It wouldn’t be good for business if people start to think I give away piglets for less than they’re worth.’

Sten drove off with Sven holding the piglet in his lap in the passenger seat. Carl, Otto and Oskar sat, satisfied, in the back seat with Bert laid across their lap.

The piglet let out an occasional squeak as they made their way back. After dropping off Otto, Oskar, Bert and Carl, Sven and Sten drove home. It was nine in the evening and their father was still not back.

‘There you go,’ Sven said and put the new piglet in Fatty Betty’s box.

As they closed the door to the barn, they stood face to face with their father.

‘What have you two been up to?’ he asked. ‘Gun told me that her neighbour saw my car going by with two feet sticking out of the back window.’

Sven and Sten looked at each other.

‘Nothing,’ Sven said. ‘We just went to visit some friends. Neighbours say all sorts of things, Dad. You know that. Just to come up with some gossip. Last time Gun woke up in the middle of the night she said she saw two unknown cars heading our way. That never happens here. You always say we should ignore gossip.’

‘Move,’ he said and headed into the barn, but came out as quickly as he went inside. ‘Where is she?’

‘Long story short: we found her dead in the barn, and we know you loved her so much, so we replaced her with a new one before you returned home. See, isn’t she cute? Maybe you can call her Betty the Second,’ Sten said.

Ida stood, puzzled, over Fatty Betty’s opened belly. Four sealed packages protruded from the interior. She took them out and felt them. Slitting open one of the bags, she examined the white powder inside. Her mouth opened and closed again. She looked around, even though she was alone in the barn. Ida’s reflection stared back at her from one of the windows. Then she smiled and put the packages in her pocket.

Anki is a Swedish working Mum who is taking every opportunity to write stories and novels. For as long as she can remember, she has been interested in books and creative writing. It’s something that gives her great strength and joy.