My hands ache, bone-deep pain spawned by prolonged exposure to frigid air. Moisture frosts my eyelashes and stings my cheeks. I scan the vicinity for my husband, but he’s gone.

I warm my fists in my pockets, then bend back to the task. Fingers numb, I keep dropping the toothbrush. I probably shouldn’t blame him, but I can’t help it. This would never have happened if he could control himself at the hardware store.

My husband is not an outdoorsy guy. Dirt bothers him; bugs freak him out. He won’t even go into our yard, and he refuses to eat a tomato or carrot from my garden.

‘It’s had dirt on it,’ he says. ‘And worms probably touched it.’

‘The grocery store carrots have been in the dirt too,’ I tell him.

‘Don’t ruin carrots for me.’ He claps his hands over his ears.

Despite this weird aversion to nature, he covets indoor plants. Not easy houseplants, like philodendrons, but quirky things unfit for domestication. He tries to sprout an avocado pit every summer and he itches to grow zebra grass in the living room. At least once a year I catch him shopping online for ‘super-miniature’ blueberry bushes. ‘Think we can fit this on the bookshelf?’ he asks.

Knowing his unreasonable predilection, I try to keep him out of the garden section at the hardware store – especially during planting season. But on a spring shopping trip when the aisles are bedecked with brightly coloured specimens, I let my guard slip. He wanders away unsupervised. By the time I find him, he’s deep in fruit tree territory.

‘Look! Tabletop orange trees.’ His whole body vibrates as he studies a perky little tree in a cheerful polka dot nursery pot. ‘I’m buying it,’ he declares and, before I can stop him, he has it loaded in the back seat of the van, seat-belted for safety.

In the first halcyon weeks, he fusses over his new tree, talking to it and watering it every day. I show him the instruction card that advises dry soil, but he waves me away. ‘It’s thirsty,’ he says.

The tree soon loses its luster and refuses to produce new leaves. He decides the solution is a self-watering techno container from the internet. It requires special potting soil.

‘Will you do the dirt part?’ he asks.

I shove the instructions at him again. Big bold letters shout: Never put your tabletop Calamondin in a self-watering pot! He ignores it.

‘Please do the dirt?’

If it dies, at least I can reclaim that table.

The new ‘potting medium’ has no actual soil, it’s just a mix of brown flakes and teeny white pellets. The complicated setup goes back to our sunniest window but, within days the leaves yellow and curl. It seems the inevitable spiral of doom has accelerated. My husband launches into panic mode.

‘It must need more water!’

The leaves drop, one or two a week. By Thanksgiving, the floor by the sunny window is littered with crackly brown fallout. Only one stubborn branch retains its foliage. We begin our customary horticultural death watch, but then, in a wholly unexpected plot twist, the branch rallies with a delicate cluster of flower buds. The scent is heavenly, even before the flowers open. Then, as each one unfurls its ivory petals, the perfume deepens and envelops our entire home. I’m captivated by the intoxicating fragrance and wish it would never end.

But of course it does. Two days after a polar vortex throws us into a dystopian winter hellscape, the final flower petal spirals to the floor. It leaves behind a bald tangle of sticks poking out of the fancy pot. Disappointment fills me. No longer concerned with reclaiming lost table space, I mourn the absence of the lovely perfume and long for the heady scent. Pinching the branches, I discover they’re still supple, with a hint of green under the papery bark.

‘I’m going to save this tree,’ I proclaim.

My husband raises his eyebrow at me, but I ignore his skepticism and begin my quest, mid-blizzard, with a search for low-tech potting supplies. All the garden centres are closed for winter, the hardware store is sold out of everything but road salt, and the streets are slicked with black ice. I finally track down a nursery owner who agrees to open the back of her potting shed for me. I have to thaw the dirt first, but I soon discover that blow-drying a bag of potting soil is the easiest part of the job.

Out on the patio, I think my face is freezing off. The stupid techno dirt has soaked up gallons of water, expanding exponentially. The white pellets are swollen like tiny agricultural tampons.

‘That dirt is super creepy,’ my husband says, just before he disappears.

It’d be easier to do the work in the kitchen sink, but the mutant tampon dirt might wreck the drain pipe—I don’t want to have that conversation with my plumber, so I work outside in the vortex, using a toothbrush to scrape the puffy pellets out of the waterlogged root ball. I know the tree is more sensitive to frostbite than I am, and the pellets are crystalising. When my snot freezes, I rush ahead and bang the entire tree against the frozen patio paving stones to dislodge the remaining gunk while my cowardly husband hides in the basement.

Months later, the tree is verdant. New blossoms have blessed our home with magnificent fragrance for several weeks and tiny orange buds lace each branch. My husband is, once again, vibrating with the urge to fawn over it.

‘Stay the heck away from that tree.’ I jab a finger at him, wondering if I can erect some sort of barrier. After months of playing Calamondin nursemaid, I’m determined to prevent my floricidal maniac husband from killing it.

‘Are you sure it doesn’t need a little water?’ he says. 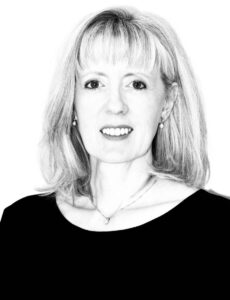 Myna Chang’s work has been selected for Flash Fiction America (W.W. Norton), Best Small Fictions, and CRAFT, among others. She has won the Lascaux Prize in Creative Nonfiction and the New Millennium Writings Award in Flash Fiction. Read more at MynaChang.com or Twitter: @MynaChang.