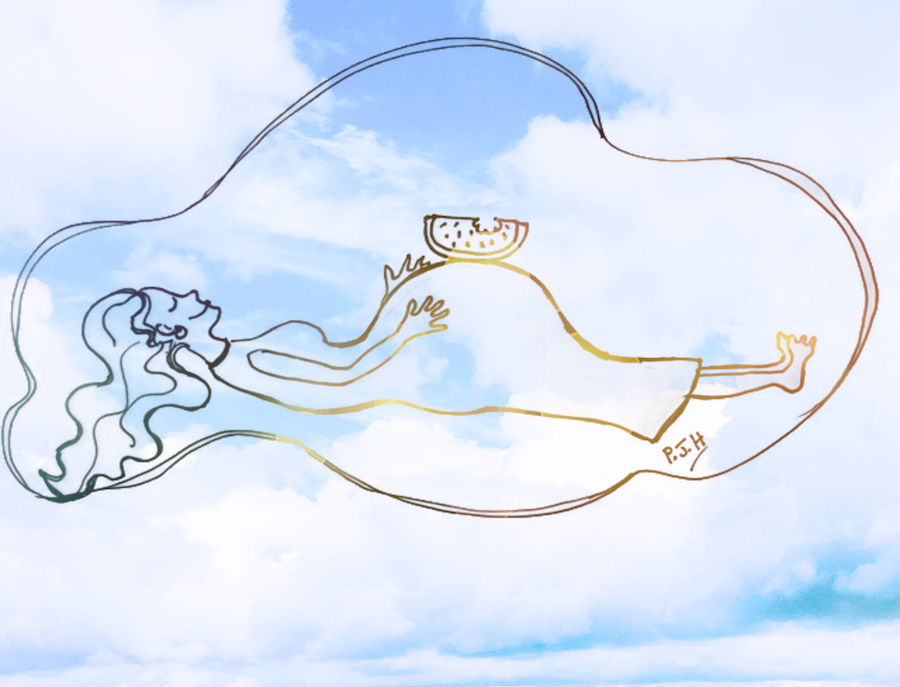 For sure Myman knows about tacos and tattoos, which he peculiarly pronounces ta-coosh. He also taught me Spanish, a bit of Arabic, a little slang — for the trains, he said.

When we got married, Myman and I, we wanted many kids. Kids so many we’d name them by numbers, too many to count. With our first anniversary still weeks away, the baby arrived. A boy. We named him One. And boy, did we let go of ourselves.

Every day, Myman would go to work, flying out to wherever he was required to defend the race, save someone, across countries and continents. But he always came rushing back to me, balancing in both hands hot food in snack-packets. We had Two, then Three. Brilliant little boys, miniatures of him, and I loved them so much. Four was a girl, just like me, and we couldn’t have been happier. Myman was driven silly mad just being at her bedside.

My Mum-Mum came to stay with us, for my hands were always full. And then I had Five, Six, Seven, Eight and Nine — all pretty little beings. We took a larger house, one in the woods with chestnut trees, full moon nights, and glowing fireflies on the tall grass. Of course, the kids loved it. I sat by the window watching them play in the clearing. Three and Five didn’t get along well, and Seven insisted he looked like Two. We’re brothers, silly! Two would say, cosseting the boy some more. Four loved babysitting toddler Ten. Mum-Mum loved the place and said, Ah! I may die here so my loving son-in-law may carry me in his arms up the teal hill there and I may see the sun as it sets in the west while I rest in my grave. Myman listened, smiled.

In the afternoons, I began knitting by the window when not nursing number Eleven. She had the boniest legs and a little droopy head. Mum-Mum said she could bet, this little ‘un, she’s a Sharapova in the making! Myman and I couldn’t have been more content with our lives. Whatever happened in the world, Myman was never late coming back to us, never rude or drunk. He always made sure I was eating well and that the kids had the best of everything.

The trouble started when we had twins. We pondered how to name them for a very long time. We even quarrelled. Myman went to work without kissing me at the doorstep. Mum-Mum said, You must stop! Enough! But we were in no mood to listen. Finally, we came up with Minus-Twelve and Plus-Twelve — for isn’t that what integers are for?

We moved to a larger place by the sea, balmy all morning, breezy in the evenings. Myman was summoned for this crisis or that, but he’d hired assistants and never went at all. We lazed by the in-house pool while Fourteen brought us watermelon slices, Sixteen sang us a ditty she’d heard on TV, and Twenty-two hummed along.

Friends and neighbors anticipated gossip from our household: stories of drunken wife-beating, scars on my arms, the man having an affair? No, nothing. They were disappointed, having invested time and a lot of emotion.

I had triplets sometime later — two boys and a girl — the year we bought a private jet. We didn’t quarrel about their naming, instead we just flew to the healer Mum-Mum insisted we should see. She was worried we were overdoing it, now that One and Two had already left for college. She said it was, quite frankly, embarrassing.

The healer ordered us to kneel as soon as we arrived.

Gaping, we obeyed, side-by-side at the healer’s feet. Mum-Mum stood at a distance.

He began chanting. It grew louder, as though he were chiding someone. Then baby-talk, in language we’d never heard. I heard Myman sob, then cry. He began to howl, for no apparent reason. And I began to cry as well, for no reason I knew.

When we came home, Myman sat all our kids together in the hall. Outside the bay windows, a tropical storm was brewing with thunder and lightning, so Myman had to shout. He said he was happy, happy for everything his kids were to him, but that he had to change each of their names.

He said, with emphasis, I’m sure this time. He said he’d name them according to a finite alphabet — A to Y — to which the kids jumped with joy. That’s something we’ve yearned for, they shouted in unison. Then Myman looked at me in his loveliest way and he said he thought Z would be the one I’m carrying, and that, he was sure it would therefore be our last.

When Myman and I brought Z home….

That’s a story for another day.

Mandira Pattnaik is a writer of color. Her fiction has appeared/is forthcoming in DASH Journal, Watershed Review, Passages North, Miracle Monocle, AAWW, McNeese Review, The Penn Review and elsewhere. She writes columns for Trampset and Reckon Review and posts craft micro-essays on her blog mandirapattnaik.com