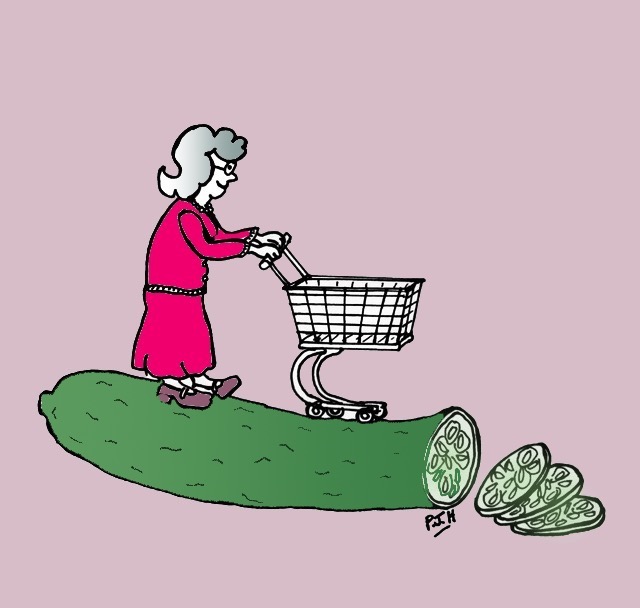 ‘I want a cucumber sandwich,’ Michelle said on the ride back to the Hunt Home. Nothing had been the same since Saul died. The pendulum never lied. Saul had denied it.

Michelle had warned Saul. He hadn’t listened. He never listened when Michelle said, ‘You bastard! That’s not what Myrna said about the brisket. She said, “It might have been sandpaper, not scrap paper.”’

That was last Rosh Hashanah in Ogunquit. The beach had been too crowded and conversations too loud for Saul, the price of a September scorcher. Saul hadn’t looked good. He’d blamed the heat. Michelle had known he was going to watch Judge Judy.

‘Don’t pick at the rugelach until the kids get here,’ Michelle said. The kids were fifty-five, fifty-two and the baby was forty-nine.

‘What a baby,’ Michelle had said to Hannah when she whined about crow’s feet.

The family of Hybrid SUVs and Mercedes arrived in dribs and drabs. Saul had been eating like the famine was tomorrow.

‘The pendulum says you aren’t going to Tuscany,’ Michelle had warned him weeks earlier. He’d ordered a chive cream cheese bagel and a bacon cheddar omelet.

‘If your mother could see you, kosher my ass.’ Michelle had stopped quoting the cardiologist’s report. She didn’t dare mention the extra fifty pounds he’d gained since the last knee surgery or he’d get pouty lips for the rest of the day.

Michelle wasn’t a health nut. She was wary of organic this and that. She didn’t trust Whole Foods, but she shopped their sales. She knew at eighty-three and eighty-seven respectively, their internal clocks ticked precisely. She honored her sacred mechanism, eating good food, drinking plenty of water, and walking in nature.

Max drifted in and out, listening to his mother rattle on. He couldn’t remember why she’d ended up at the Hunt Home after his father’s death. Perhaps the family’s grief at Saul Schwartz’s passing couldn’t be logically explained.

‘Your father took the gifts for granted,’ Michelle said. ‘Not for nothing, I want a cucumber sandwich. Get in the right lane! I need to stop at Traders Joe.’

‘Tomato, tom-ma-ta, they’ve got a sale on cucumbers. A few slices on a piece of lightly toasted pumpernickel with a dab of hot mustard . . . Oh, la, la! Since your father died, I don’t have sex. That’s all the spice I get. Get in the right lane.’

‘Don’t they feed you at that place?’

‘Damn right, you don’t even know the name of that hole. Use your directional, for God’s sake. Who taught you to drive? Must have been your father, I taught your sisters. They use their directional,’ Michelle said.

‘Don’t you eat meals there?’

‘Don’t get like your father, circling for the closest space. That bastard left me. Look at me, living in that place. How could you have let me go there?’

‘Let you? Who has ever let you do anything? You said, “I can’t take this house and all this stuff. It reminds me of your father,’” Max said. He even sounded like Michelle when he uttered her words.

‘You sold the house out from under me,’ Michelle said.

‘No, Maw, the house is still there. None of us have time to go through the stuff,’ Max said.

‘Like I’m dead, that’s how you talk about me. I need a wagon, not a little basket. Pick up three cans of coconut milk. Not that kind – the reduced fat. Are you trying to get me fat?’

‘When do you eat all this, Maw?’ Max deposited the cans in the wagon.

‘Come here. Feel that cucumber! That’s how cucumbers are supposed to be. Oh, Maxie, I miss that bastard, your father. You’re just like him, clueless, but you’re a good kid. There I was, mourning your father, and you kids haul me off to some old people’s home with mush food and sodium-free shit. It’s fake this and artificial that. If I ate their schmaltz, I’d be dead before Passover.’

‘Maxie, you’re a good kid,’ she said. She reached up and fingered his hair. ‘You got good hair. You take after me. If you put in a little Grecian Formula, sweetie, you’d look forty-eight or forty-nine.’

‘Maw, will you be able to live back at the house alone?’

Michelle picked up a package of chocolate peanut butter cupcakes. ‘Have you ever had one?’

‘To die for, and you’d hate to die without trying one. When you drop me off, come in and I’ll fix cucumber sandwiches. We’ll split a cupcake,’ she said.

‘Aren’t you going to eat dinner there?’

‘I wouldn’t make a cat eat there. You know how I feel about cats. Get in that check-out line. Grab a packet of espresso almonds. Tell me you’ve tasted them,’ Michelle said.

‘I was thinking I’d rent out my nursing home room – like on Airbnb or HomeAway,’ she said.

The next morning, Max reached for Lisa. She’d gone to the gym. Max stretched across the bed. He was trying and failing to convince himself that shopping at Trader Joe’s hadn’t happened when the smoke alarm blared.

He bolted down the stairs. ‘Molly, pop the damn toaster!’

‘Isn’t it supposed to pop by itself?’

‘Not everything in life works according to plan,’ he shouted.

‘Whatever. What happened to good morning? Jesus, Dad.’

Max wondered if every middle-aged man felt as worn out as he did with an eccentric mother, a Barbie Doll wannabe for a wife, a teenage daughter who lacked all common sense, and a job that required flying all over God’s creation. He stared in the mirror and considered Grecian Formula. He agreed with his mother. She didn’t belong at the Hunt Home.

NPR news piped into the shower, along with a steaming blast of warm water. Trump had signed another travel ban. Max was to be the keynote speaker on global communication in Auckland and that sound bite would make his journey longer and more aggravating, with a connecting flight at LAX.

Max passed through Logan Airport’s security, fastened his belt and slipped on both shoes. He walked towards Starbucks while listening to his voicemail.

‘Honey, it’s your mother. The robins are singing this morning. Those cucumbers are scrumptious. There’s nothing like a cucumber sandwich!

Maxie, I was thinking about your father, leaving me a widow. He did this to me. It’s just like him. He paid all the bills. He even negotiated car insurance deals. It made him happy to save a nickel here and a buck there.

Sweetie, I called Leonard, our lawyer. I’m getting outta here. I’m going to clean out the house and rent it. I’m joining the Peace Corp. You know Myrna’s daughter-in-law, Sally? She says I can volunteer in Zimbabwe. I’ll teach Sex Ed.

I’m off to Leonard’s office. I won’t sign anything until you get back. Maxie, I’m not getting any younger, so chop, chop. Drink water. You can dehydrate on long flights. And set a time limit, for God’s sake, on your voicemail, so that people like me can’t go on and on. Love you, sweetie.’ 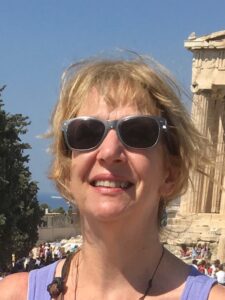 Marie G. Coleman is a New Yorker based in New Hampshire. She holds an MFA from Lesley University, and her work has appeared in Pangyrus, Hippocampus, and Every Day Fiction. Marie teaches English to high school students. They make her laugh.    Marie’s website will soon be live on mariegcoleman.com.