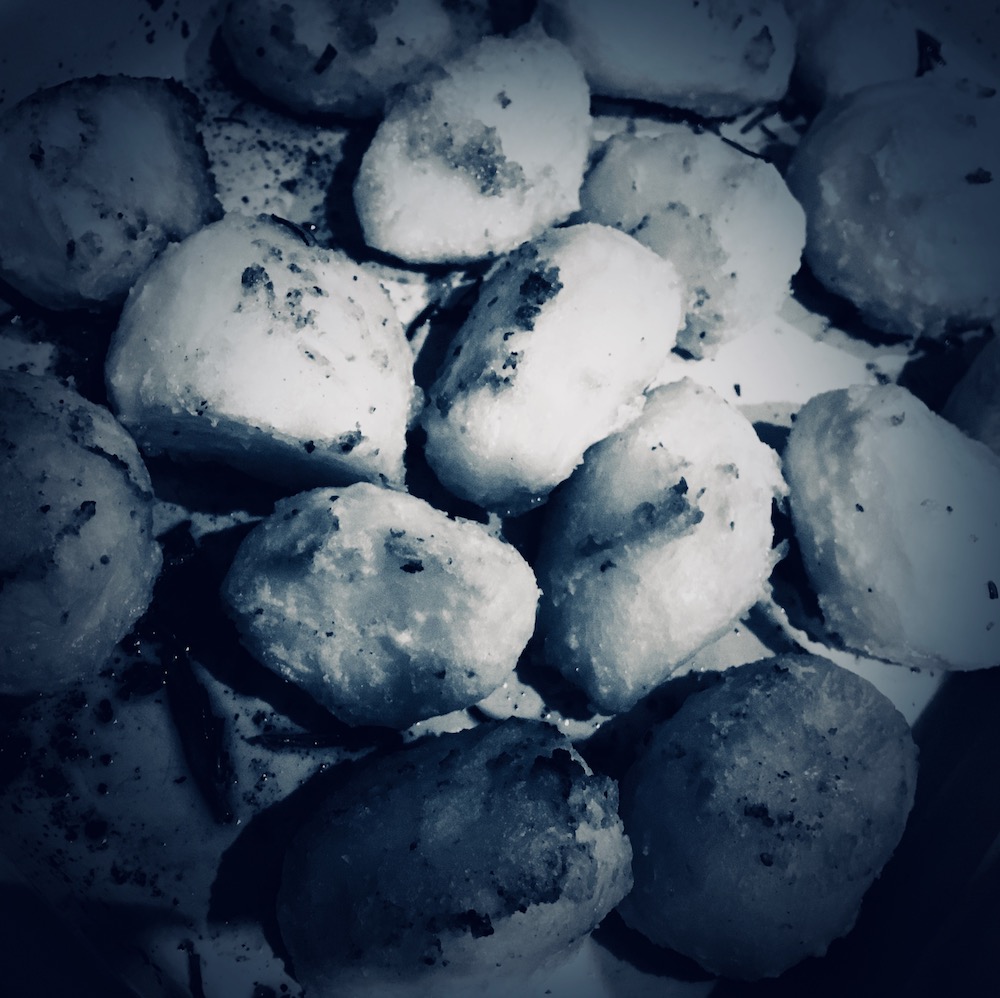 The perfect roast potatoes are fluffy in the middle, with uneven, crispy edges. To achieve this, par-boil first, drain, and shake well to maximise surface area. Bung them in the fridge for 10 minutes to draw out excess moisture, toss with fat and roast in a hot oven. Only salt them at the end of the cooking process. 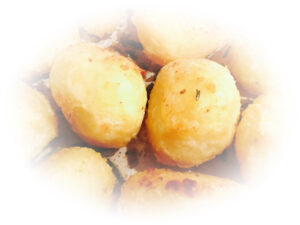 ‘Dave would definitely approve,’ thought Lina as she speared a roast potato with her fork.

Steam hissed from the holes made by the tines. She bit through the crisp outer shell, teeth meeting amber crust, salt flicking her tongue, the soft, satisfying potato-ey pillow inside flooding her palate with savoury deliciousness.

All the sacrifice had been worth it. The backbreaking spadework to dig out the new bed; the diligent application of organic and inorganic soil improvers; getting the drainage just right; winnowing out the stones; paying careful attention to geometry to create ridges and furrows at the optimum angle for potato cultivation according to her gardening manual. She’d even measured those ridges with a protractor.

‘Hell, even Dave’s mother would approve of these,’ she thought, tucking into a second perfect roastie.

From the start of their relationship, Lina had always found the competitiveness about roast potatoes in Dave’s family tedious. She’d been baffled by the almost religious significance they bestowed on the humble side dish to a juicy joint of beef, remaining unfazed by Dave’s boasts that he made the best roasties. But when he started praising his mum’s roasties, holding Lina’s up as poor in comparison, her emotions had plumbed new furrows and scaled new ridges of their own. Hurt, to start with, fading to disappointment, then blossoming into anger and, finally, exploding into rage.

Lina’s quest for the perfect roast potato had begun.

She checked the tiny seed potatoes and chitted them on a south-facing windowledge, selecting only the very fittest examples to plant in her new patch. She watered them in dry weather, watching shoots of green emerge from the tops of the ridges. She had cried tears of joy when that happened.

She’d even delighted in the inconspicuous white flowers, proof that her plants were happy in their earthy homes. She hoed and weeded through the hot summer, growing brown from the sun. No sacrifice too much for her little green dollies, as she thought of them.

The harvest had been the highlight of Lina’s year: pulling up the plants and feeling them break free from their comfortable beds of perfect, friable brown soil. She held the firm potatoes in her hands, crumbling away earth with tender fingers and feeling their pale subterranean chill in her palm. The earlies had been delicious; she’d eaten them boiled, dressed with melting butter that she’d allowed to dribble down her chin. But it was the late season spuds that Lina had most looked forward to – the ones she would make into roasties.

Lina speared another roastie with her fork, enjoying it with her eyes as she lifted it worshipfully to her open mouth. Teeth met crisp shell, tongue met salt, fluffy interior yielded to her palate. With her free hand, she chef-kissed the air. Delicious.

Such a shame Dave couldn’t be here to appreciate her achievement, she reflected. The most perfect roast potatoes ever. After all, he’d had more than a hand in producing them. 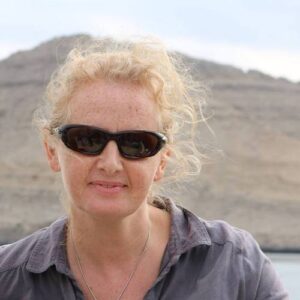 Sam Foreman works for a youth sailing charity. She enjoys writing, sailing, reading and running. Member of an online flash fiction group, she’s also working on a novel and enjoys experimenting with genre, structure, style and voice. A compulsion to make people think, feel and laugh drives her writing.