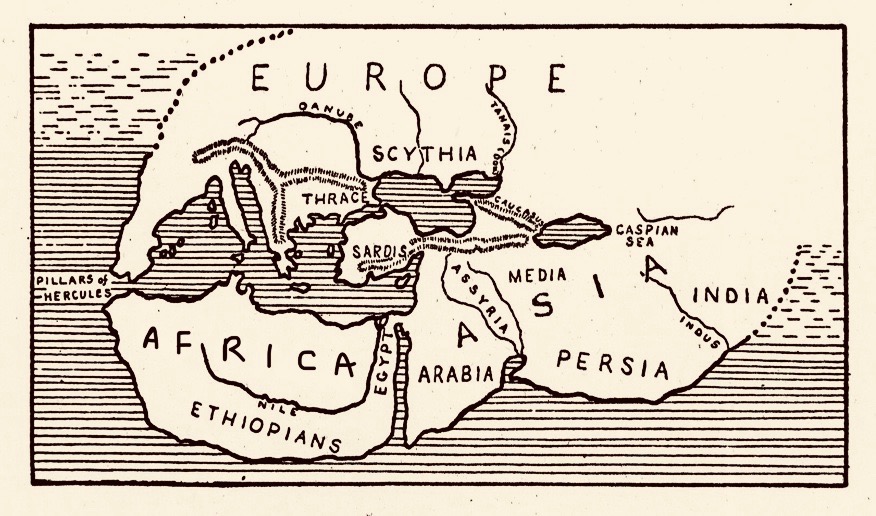 Herodotus has recently died, and his spirit has descended to Hades. He stands before the judge, Minos, charged with spreading misinformation and misrepresenting the continents on his map. The review body is formed of personified representatives of Africa, Europe and Asia.

Minos: Next case, who’s this old fellow? I hope he doesn’t eat into my lunch break.

Herodotus (shambling into the dock): I am Herodotus, the father of History.

Minos: What the hell has that got to do with anything? Now let me see, you are accused of misrepresenting the natural outline of the world on your map, of fusing together lands which are patently not so, and of making up far too many details which will lead future travellers astray. What say you?

Herodotus: Well, I personally researched the details for that map. Blistered and exhausted, I trekked the four corners of the world conducting my researches-

Africa: There aren’t any corners, as you will shortly be finding out!

Europe: And what about my northern frontier, where I become a series of half-hearted dots?

Asia: I am merely a tucked-on afterthought, the result of total ignorance.

Minos: Will you all be quiet and follow protocol! Wait for my invitation to cross-examine.

Africa: But the greatest river in the world, the Nile, is all wrong. Why on earth is its source rising between the F and R of Africa? Such an error, and you claim to be an expert on the African peoples.

Minos: Silence! Herodotus, to be fair you have depicted the beautiful land of Crete, my homeland, in its rightful place, at the centre of the Mediterranean, so I cannot really see what all the fuss is about.

Europe: Where’s Britain? You have omitted one of the great kingdoms of the north.

Herodotus: The Delphic oracle revealed to me that Britain will one day soon no longer be a part of Europe, so I decided to omit it. Why confuse future generations? I am a sceptic that it was ever in, but remain aware that a kingdom that votes to withdraw from Europe will struggle to make its mark on the world. In any case, it is surely best to ignore such a trivial, cold, misty little kingdom,

Minos: Right, I have had enough. It is high time for my lunch. I didn’t have to put up with all this when I was dealing with that wretched half bull, and its penchant for gobbling down Athenian children, and that mad inventor whose son flew too near to the sun when his waxy wings disintegrated. Talking of the Sun, where is our star witness?

The Sun (enters): I can shed some light on this case. You see, as anyone who drives my chariot will be able to confirm, the world is round, and the great continents of Europe, Africa and Asia are all interlinked and interdependent. Herodotus did not seek permission to use my chariot, more’s the pity, but he has at least conveyed the essence of this truth that the world is the sum of its component parts. There are grave errors, of course, but I have to say that his overall impression of our world is one of diversity and intrigue. Anyway, he appears to be of a sunnier disposition than the rest of you selfish, verbally incontinent, personifications.

Minos (blinking and a little dazzled): Em, oh, quite right, Sun, glaringly obvious in fact, there seems to be some light at the end of this particular tunnel, I have decided to throw out this case and permit the accused to ride in your chariot to improve his map for one and all. I only hope that, unlike that hot headed Phaethon, he drives with caution and consideration for others. Case dismissed!

Chloe Hall is a 19 year old full time student at the Open University, reading English language and literature. She is passionate about literary culture, women’s rights, and the environment. She has previously had a short story published by Funny Pearls.