I always wanted to be a teacher. I would line up my toys and make them do ‘good listening’ while I taught them the alphabet. I would chant tables at them with a smile. I would look at the long line of neat ticks in my workbook and know that one day it would be me sitting there, ticking books and lavishing special stickers on deserving papers. Work experience in a nearby school was just what I was looking for.

When I arrived, bursting with enthusiasm, the secretary introduced me to Mrs Brownlie, who looked like she’d been mainlining coffee since six am. I told her I was there for work experience and she muttered something like, ‘All hands on deck,’ and then the bell went.

Ever seen the Running of the Bulls? Twenty-eight six year olds charged into the cloakroom. There were coats, gloves, snacks, reading books and pencil cases flying everywhere. I flattened myself against the wall and let them stampede past me. Then the class found their seats and magically started working on sums that Mrs B. had placed at their tables. Order was restored until a child sidled up to me.

It was 9.05am. But this was only the first of the bathroom requests. By 11.49am and 27 further requests later, I realised that the children’s favourite hobby during the school day was visiting the toilet.

Next Mrs B. asked me to hear some reading. I sat down with a group of pupils and we were reading a story about a magic adventure when Alfie started rubbing his red, puffy eye.

I was telling him not to touch it when Charlotte started rubbing her eye, and then Jamie. Before I knew it half the class were walking about with their hands over their faces, complaining.

I was alarmed at the mass outbreak, but Mrs B. told the children to line up. When the bell rang, they went out – stumbling because covering one eye was affecting their depth perception. ‘They will have forgotten about it by the time break is over,’ said Mrs B., as she strode off to the staffroom with me following.

The staffroom was dull and cheerless with a few faded posters stuck to a pinboard and some wilting pot plants. The main focus was the kettle and the packet of chocolate digestives. The teachers seemed pretty protective of the biscuits, so I sat on my hands. There was a lot of talk about The Krickulum and how packed it was and how there was only so much time in the week and how many weeks there were until the holidays. I didn’t know what or where The Krickulum was, so I hoped no one would ask my opinion.

After break we did some maths and the Itchy Eye was forgotten. The class were doing subtraction, but not very well. I tried to be sympathetic to their errors, although it was baffling to see them acting out apples being taken out of a bowl, only to come up with an answer which would have supplied a fruit shop.

I also learned not to ask small children rhetorical questions. Mrs B. would say, ‘Who is making that silly noise?’ and get fifteen suggested names in reply. And now I know that when you tell a class of children to write their name at the top of a sheet, at least six of them won’t do it and another six will say, ‘Should we write our name at the top?’

Other lessons for me: never sit on a wet seat, children will smell an item of lost clothing and with the nose of a bloodhound name the owner, when a child complains of a sore tummy you tell them to take their jumper off and have a drink of water – other complaints are solved with a wet paper towel.

I was looking forward to lunch but Mrs B. handed me a pile of workbooks to mark.

Afterwards, she wanted the classroom set up for art. We spent ages laying newspaper on the tables, squeezing paints into little containers, cutting paper to the right size and scurrying about trying to find decent paintbrushes. When the class returned, their faces lit up at the prospect of runny, sticky paint. I felt a strange dread and began counting down to home time.

I would love to say the next two hours were filled with a hum of creative activity, but it was more like a clamour of tiny dictators determined to use as much paint as possible. Everywhere I looked children were carrying and dropping their wet paintings and knocking over water pots. Each child wanted me to admire their artwork and I had to dig deep to find enthusiasm for their Jackson Pollock-esque efforts. ‘Tidy-up time’ came and went and the classroom looked like the site of some paint-based explosion. When the home bell cheerfully rang, the class abandoned their tables, found their bags and coats and skipped out the door.

Mrs B. and I staggered back to the classroom, scooped up paint-soaked paper, cleaned brushes, and wiped paint splatter off the walls. Then she shoved a load of marking in her bag, necked two paracetamol and made for the door. I thought she was going home but she announced she had to go to a staff meeting.

And that’s why I now want to work in an office. 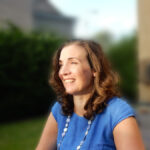 Catherine Ogston lives in Scotland and writes flash, short stories and longer fiction. She was a commended finalist in the Exeter Novel Prize 2020 and recently won the Trisha Ashley Award for a short story. Her fiction has been published with New Writing Scotland, Storgy, Bath Flash, Reflex Press, Cranked Anvil, Firewords, NFFD and others. On Twitter @CatherineOgston