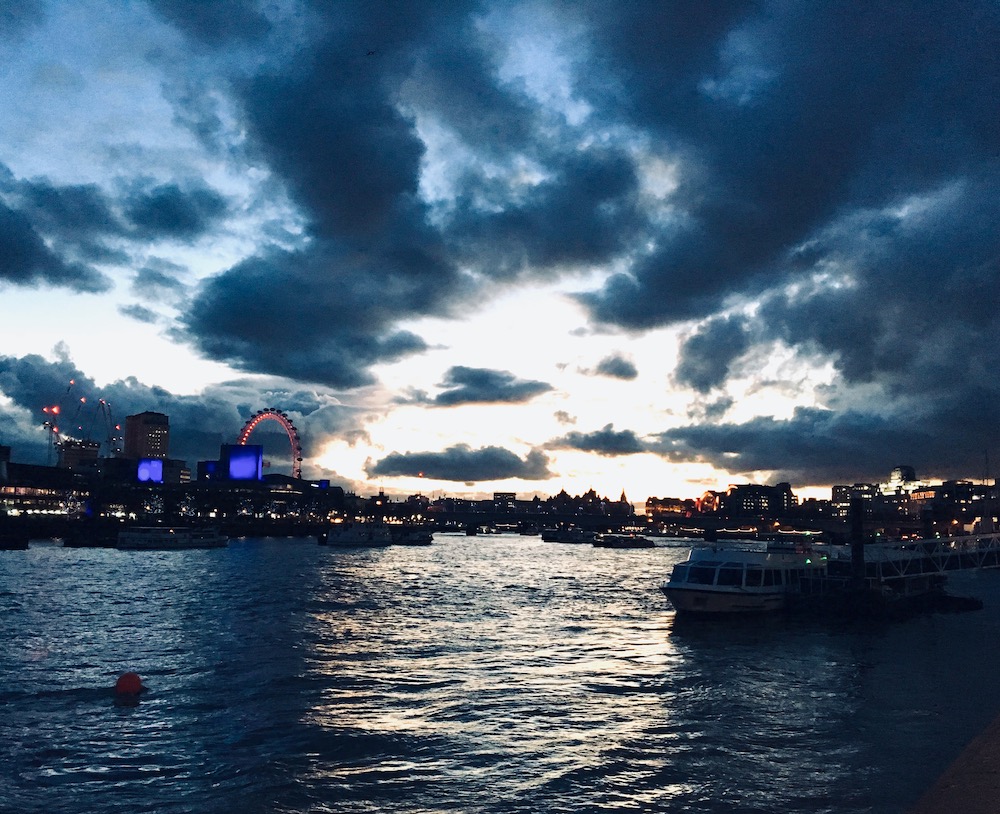 Giles and his friend Rupert joke about starting an urban fox hunt, how they would gallop down the streets dressed in jodhpurs, clip-clopping coconut shells, shouting, ‘Tally-ho!’

But the fox, they decide, might not cooperate. Instead of hiding, furtive, under privet hedges, it would pause under streetlights and turn with a look that jeered, south London style, ‘What are you looking at?’

The foxes, they agree, are a menace. They are scavengers, diseased, and need culling. They leave disgusting loose faeces on lawns and paths, even on garden furniture. Their screaming fornication wakes the neighbourhood at night. It’s only a matter of time before something happens – a bite, an infection.

Giles’s neighbours, Ken and Caroline, like to outsource: they have a team of gardeners who primp and prune their sterile garden with machinery; they employ a cleaner and a childminder and cut flowers are delivered to the house weekly by a man on a tricycle. Giles and Ken sometimes chat over the fence, discussing the test match or the state of the weather. They swap keys and take in deliveries for each other. The foxes are a common enemy. Ken deflates his children’s paddling pool every evening, suspicious the foxes will urinate – or worse – in the water.

But it’s their personal trainer who gets on Giles and Felicity’s nerves – Lisa, a loud Australian who shouts encouragement and yells instruction over grime and hip-hop beats.

‘Alrighty! Let’s get those legs a PUMPIN’. Just ten seconds to go! Ten, nine, eight, seven, six, five, four, three, two, one! Feel the burrrrn, Nige! you can do it!’

It’s relentless. Exhausting to listen to. The grunts from Ken, the subtle flirtation, the praise for Caroline, ‘You’re really goin’, girl’.

On a glaring hot day, closing the bi-folding doors might seem aggressive. Giles and Felicity grit their teeth, retreat inside, mimic the Australian, sotto voce, ‘Alrighty!’

Giles and Felicity treat themselves to rib-eye steaks for supper with wine, decanted ahead of time. While the steaks rest in their bloody juices, Giles takes the smouldering pan outside to cool down. They eat with contentment, coating their meat with liberal daubs of Colman’s, and drink quickly, finishing the bottle by the end of the meal.

In the morning, Felicity finds the pan where Giles left it, balanced on the low retaining wall. A wet pile of fox turds sits perfectly centred. Revolted, Felicity dons yellow rubber gloves and encases the pan in a long-life shopping bag, discarding it in the wheelie bin. The pan was expensive, but cleaning it is not an option. Her stomach lurches when she pictures the mustard smeared steak.

Giles likes to think he is sensitive to the issues. Humans are the interlopers, not the other way round. The foxes have been herded into ever smaller and disconnected patches of green. Sometimes he even admires the challenging magnificence of dark staring eyes, the balancing gymnastics as the fox straddles the wisteria twined on the back fence. The problem, he thinks, is over-breeding. The foxes have no natural predators and are too well-fed. Rubbish bins on Tooting Common overflow with pizza boxes and fried Chicken Shop bones, a smorgasbord leading to poor digestion and impetigo.

He fantasises about taking a shotgun, positioning himself at the spare bedroom window. Purchow! Got ya you devil. He sighs and settles to the task of research. He googles ‘environmentally kind fox deterrents’.

He could pee around the garden perimeter, staking his territory as the alpha male, but Felicity would never allow it and he shudders, picturing a disappointing dribble instead of a powerful precision-aimed jet.

He finds, instead, a recipe for a repellent he can make, pulping garlic, chillies, mustard powder and cayenne pepper into a liquid to spray onto the patio, the back fence and the tool shed roof where foxes enter the garden.

Giles recalls the childhood story of how Pedro the Brave outsmarts a wolf with a fiery sauce. ‘It blew the wolf’s socks off, his shirt and his pants,’ he chants the story to himself as he sprays, remembering just in time to keep his back to the breeze.

Hailing Ken from the end of the garden, he waggles his bottle gun.

Ken smiles from behind his mirror sunglasses.

Giles wakes to squabbling parakeets in the cherry tree outside. He admires their red beaks and acid green plumage, but they’re noisy, ugly-sounding blighters. He wonders if they chase away the native birds.

When he leaves for work, tiptoeing so as not to wake Felicity, he almost stands in a smear of faeces, yellowing the geometry of the Victorian path tiles. Giles swears. The sly little bugger. He hadn’t thought to spray the front garden too.

Felicity and Giles go to stay with Rupert and Mary in their countryside house. There’s a boot room and a large stone-flagged pantry. An Aga squats in an alcove in the kitchen. Outside, there’s an orchard and a croquet pitch, and a sit-upon lawnmower. Mary grows old English roses with heavy-headed blooms. In private, Giles and Felicity scoff at Rupert playing the country squire. He grew up in Fulham and went to a London school.

After lunch, they take an afternoon walk across rutted fields. The hedgerows froth with cow parsley, soft pink dog roses, bramble flowers, and hazelnuts with serrated shovel-shaped leaves. In the lane, there is the furious hum of flies feasting on the bloated body of a badger, perhaps struck by a car. They circle wide. Felicity covers her nose.

When the evening wind blows from the west, the house fills with a sour smell of urine from the horse livery next door. Mary apologises as if the foul air is something she can control. They withdraw to the far side terrace. Mary serves canapés while Rupert tops their wine glasses, right to the rim. They lean back on damp cushioned garden chairs.

Giles spots movement against a far line of hawthorns. A fox, low to the ground, in rapid skulking motion. It sniffs the air, then continues close to the shadows. Giles follows the bobbing white tip of its tail. He keeps quiet, sly, as he drinks deeply from his wine. He finds he doesn’t want to talk foxes or make jokes about starting a chapter of the urban hunt.

On the drive home, Felicity dissects the weekend, interrogating the meaning behind conversations and passing judgement on the food and the wine, the décor, the cleanliness of the bathroom. Giles makes the occasional ‘hmmm’ or ‘quite’ to satisfy Felicity into assuming his agreement.

‘Urgh, that smell,’ she says. ‘I don’t know how they stand it. There’s something about the countryside, for all the green and pleasantness that is too… too… animal.’ She lands on the word as if settling a long-standing argument.

Giles swings back the bi-folding doors. He breathes the crisp morning air, listens to the chattering sparrows, busy in the climbing hydrangea. A magpie cackles. Giles blinks out of habit. One for sorrow, two for joy.

He is making coffee when the pumping music starts. Blast and bloody hell. Lisa, the personal trainer.

‘Ah jeez Ken, I hear you’ve had a shocker this morning. That’s not what you want to see over your breakfast shreddies.’

Ken strains to hear over the strident beating music. ‘A shocker?’ he answers Lisa, his voice low pitched, harder to hear.

‘Well, you’ll have some aggro to burn off this morning. Dead fox! Let’s crack up the boom box!’ Lisa turns the volume even louder. ‘Alrighty, here we go!’

Giles returns inside, nursing his coffee. Dead fox? On the lawn? He wonders where his magic potion is.

In the afternoon, Giles sees Ken out in the garden.

‘Hello,’ he calls. ‘Did I hear some trouble this morning?’

Ken is taciturn. He gives the basic facts. Yes, a large fox, dead, smack in the middle of his lawn. It had been sick, a nasty mess. He’d had to call the council, bag it in bin liners and leave it for them to dispose of. Not how he planned to start his day.

Giles murmurs, finds himself apologising. Something about Ken’s manner makes him feel guilty.

‘Well, that’s one less fox to make trouble,’ he says with forced jocularity as Ken turns and re-enters his house.

Giles is hanging out the washing, searching for a dropped peg in the undergrowth. He finds, as if hidden for safekeeping, a half-chewed tennis shoe and the squeezy spray bottle, intact but swollen. It crackles, bubbles rise from the fermenting brew. He squeezes the trigger, meaning to release the pressure, but the tight plastic splinters and the explosion spurts the chilli garlic juice all over his hands, his linen shorts and canvas shoes and onto the drift of white Japanese anemones.

Giles considers the mess – there’s even spray on the clean sheets he’s just hung out – and finds his throat tight, his eyes prickling. It’s so bloody unfair. Unable to stop himself, he trembles, his shoulders heave, and he begins to cry. 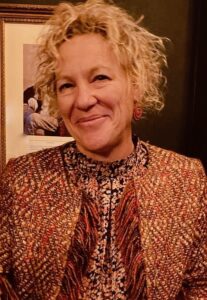 Emily Macdonald was born in England but grew up in New Zealand. Fascinated by wine as a student, she has worked in the UK wine trade ever since.  In writing and in wines she likes variety, persistent flavour, and enough acidity to add bite. Published writing: https://www.macdonaldek11.com