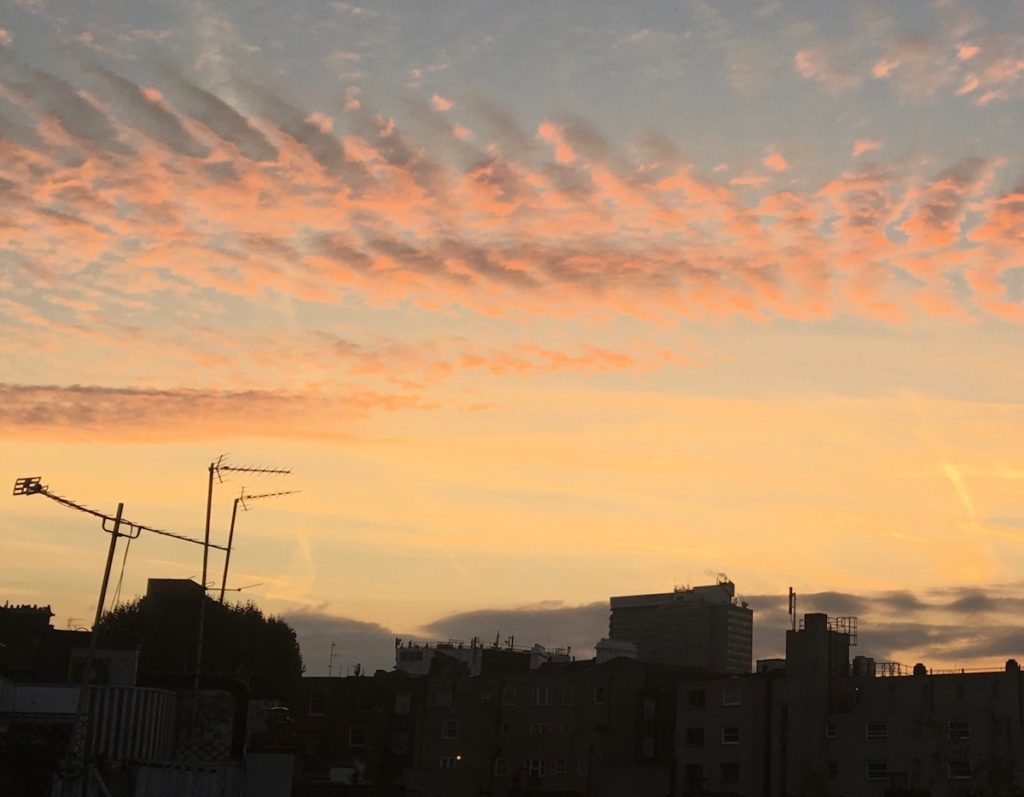 Our heroine is awake.

The red digits on the radio have drilled into my eyelids, waking me up with their laser-strength light.  A bad dream is lifting.

There’s no need to panic. This was a mild interruption. Now it’s just a matter of turning over and drifting off to sleep.

The light from the red digits does appear stronger than usual. But how can this be when it’s the same clock radio that’s been standing in the same position, on the same bedside table since I moved in? It’s not as if it runs on batteries.

Could it be that there’s more power flowing through the wires tonight?

Maybe the electricity is coming from a new plant. One nearer to my house.

Time to activate sleep hygiene measures.  I pick up my new moleskin notebook from the bedside table and write: ‘Google electricity origin.’

I’m probably being unfair to the Mayor’s office. After all, his title is The Mayor of London, not The Mayor of Outside of London.

There are chocolate chip cookies downstairs. The nice, chewy ones.

I’m at my desk trying not to spill crumbs in the keyboard. It’s hard to find detailed information about the sources of London’s electricity. Instead, I get a lot of offers from utility companies who want me to change provider.

I’ll just see who is on Twitter as I’ve already ruined the sleep hygiene plan. Then I can also have another cookie.

That was a mistake. @Patti-harmonhy went on a blind date earlier and this has instigated an argument between her and @StaceyLondonFun who, I suspect, has had a few drinks.

@Patti-harmonhy: ‘As soon as I saw George, I knew we’d met before.’

@StaceyLondonFun: ‘Does he live locally?’

@Patti-harmonhy: ‘I didn’t mean in this life.’

@StaceyLondonFun: ‘Did George recognise you too?’

@Patti-harmonhy: ‘That’s not how it works.’

Me: ‘This is so exciting. Are you going to see each other again?’

@StaceyLondonFun: ‘She means in THIS life.’

@Patti-harmonhy: ‘You can make jokes if you like. But in my family, we’ve always been able to remember our previous lives. Mum has vivid memories of her time at the Court of Henry VIII.’

@StaceyLondonFun: ‘Why is it that anybody who believes in reincarnation was ALWAYS at the Court of Henry VIII and never some pauper in shit accommodation?’

I’ve left them to it and gone back to bed.  It’s only two months since we buried Joseph and I’m finding the conversation uncomfortable.

To Stacey and Patti, death is an abstract entity. Not so for Joseph’s mother whom I helped clear out his house: His pinstriped suits. The soft, woolly jumpers he loved. Socks paired up neatly in the drawer. Watches with worn straps and shoes shaped by his feet.

I can’t talk about death in theory when it’s so real to me.

All that being said, I do agree with @StaceyLondonFun.

I think reincarnation is a concept that’s been created to cheer up people who can’t face their own non-existence. Except it doesn’t work. Patti is many things, but cheery isn’t one of them.

It feels as if I’ve never been more awake than now. Not even in the daytime.

In the dark I see things much more clearly. And I’m having an epiphany.

The reason Patti gets so upset when Stacey doesn’t agree with her is that deep down Patti isn’t convinced herself. Otherwise, why would she always be so insistent rather than just shrug off Stacey’s comments?

Having given it more thought, I actually don’t understand why anybody would want to believe in reincarnation. Why is it a comforting thought that you’ll be born again? It’s not as if you’ll come back to the same life and be reunited with your family and friends.  Neither is it a given that you’ll return to pleasant circumstances.

You could be born in a war zone with bombs raining on your crying mother’s head. Or delivered into the old days with the workhouse lurking after every bad harvest, forever at risk from death by a sore throat. Or worse, you could arrive in a dark future where a tyrannical world government runs the show.

Who the hell would want that?

I’m going around in circles.

The reason people want to believe in reincarnation is purely existential. The world revolves around them and they cannot imagine it without them in it. It’s the ultimate sense of entitlement.

I can imagine a world without me.

I just think about the time before I was born. A time of which I have zero recollection. Being dead will probably be the same.

The weather is changing. I can hear the wind in the bamboo outside my window.

The digits on the radio are dancing now. Little red numbers in the dark.

Or little red devils with fire in their eyes.

Another epiphany. Patti doesn’t want to go to Hell so tries to believe she’ll be born again.

Having said that, she can’t be certain those would be her only options. She could be going to Heaven.

If it’s a Heaven/Hell situation, then at least I know Joseph is in Heaven now. Otherwise, there is no God.

And it’s not another visit to earth.

This is the time. This is the shot I get at listening to wind in the bamboo.