‘Seven in a row,’ she read. ‘Seven nights in a row,’ it said. ‘Surprise him! It will bring you closer. It will reignite your love life.’ That’s what the article said.

The first night, after the kids had gone to sleep, she locked herself in the bathroom. She spent half an hour fiddling with the stockings, trying to attach them to the garter belt. By the time she entered the bedroom he was gently snoring.

The second night, the kids jumped into the bed. ‘What a pretty red bra mummy,’ her youngest daughter said, and she took it off with a sigh before they all went to sleep together in the big bed.

The third night, he was upset about work. They talked and talked and by the end he was depressed and tired and she rubbed his back until he fell asleep. Then she went to the bathroom and spent half an hour unfastening the stockings from the stupid garter belt.

The fourth night, she was upset about work. She talked and talked and by the time they were done he could hardly keep his eyes open. She had forgotten to put on the fancy underwear.

The fifth night, the oldest came home from football with concussion. She mopped up sick and put cold, wet flannels on his head and read him stories all night.

The sixth night, they got into an argument and he slept on the sofa.

The seventh night, he came back to bed.

‘I made you a cup of tea’, he said sheepishly.

They sat up in bed not really saying anything for a while.

‘Come here Romeo’ she said, taking off her flannel pyjamas. 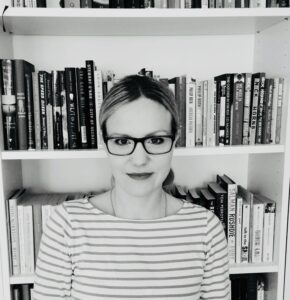 Anne Dorrian is an emerging writer who grew up in Oxford and now lives in Germany. She is currently working on her first novel.